Before the ceremony began, Seattle Ling Shen Ching Tze Temple`s abbot, Master Lian Hua Dei Hua (釋蓮花德輝上師), spoke about the charitable work done by Seattle Milk Fund, a local nonprofit organization. On behalf of the temple, the abbot presented the organization with a fifteen thousand dollar($15,000.00 USD) contribution to support its programs. Next, Fo-Ching Lu, esq., President of the Sheng-Yen Lu Foundation, reported significant progress regarding the Foundation (盧勝彥慈善基金會). Fo-Ching shared that the Foundation has officially obtained tax exempt status as a public charity as recognized by the US Internal Revenue Service and that the organization is now registered to fundraise in Washington State. She added that she recently completed a nine-month long Nonprofit Management Program at the University of Washington and was eager to put all she learned to good use. She concluded by welcoming all disciples to support and join in the charitable work of the Foundation, stating that she looked forward to working with everyone.

Thereafter, Grand Master administered a simple monkhood ordination ritual for Dharma Instructor Liang Yong (梁勇), then bestowed him a new Dharma name, Master Lian He (蓮訶上師). Grand Master approved Liang Yong as the Maha Orange Padmakumara during the previous Saturday`s Dharma speech on May 30th. Grand Master encouraged the ordained disciple with these words, `Lian He is a much honored Dharma name. Master Lian He has a PhD in the science field and he is to become just as well-studied in Buddhist Dharma and a well-known Dharma preaching talent in True Buddha School.` During the signing of the Shakyamuni Buddha name, the ordination was completed propitiously. Merciful Grand Master then performed the Bodhisattva ordination vow for three disciples and gave his blessing to a married couple.

After the ceremony, Grand Master lectured that celebrating birthdays is not as important as living your life. If each day is lived well, then everyday is a birthday. All Dharma practice, reaching understanding the truth, all depends on the cultivator him/herself. There is an old proverb saying, `A teacher may lead the student through the door, but the actual practice depends on the student (師父領入門，修行在個人). Before you become awakened you count on your teacher, but after understanding the awakening, you count on yourself (修行在個人。迷時師度).` Therefore, reaching an awakening really depends on yourself,no one can give you an awakening and the actual practice cannot be dependent on others.

Grand Master mentioned a well known verse in Japan, `Rain is to strengthen the earth.` As disciples celebrated Grand Master`s birthday, he, in turn, gave disciples a very important reminder: `All setbacks make you stronger and all difficulties are enabling you to conquer. We have to appreciate all negative occurrences because they make you as strong as a vajra, make your light more radiant and abundant.` During the lecture, Grand Master said a linage master had given him a verse during his meditation:

Buddha nature is as deep as an ocean, seeing from the middle and from the side gets different perspectives.

Tao is between existence and nonexistence, speech and discussion are all child games.

Buddhas in past, present and future, never depart from the initial wisdom.

Searching for buddhi despite the initial wisdom, none will reach the Buddha hood.

Many Reverends are going after names and fames, for these they learned different teachings.

Greediness and hatred are still tangled, how would it be possible to liberate from birth and destruction.

I really do not keep awareness of the time, often forget about what was said.

Grand Master then transmitted Padmakumara blessing empowerment to all participants, the empowerment included initial refuge and bonding affinity blessing. Everyone bathed in the Buddha blessing and Dharma bliss together and enjoyed the auspicious musical and dance performances after the ceremony. 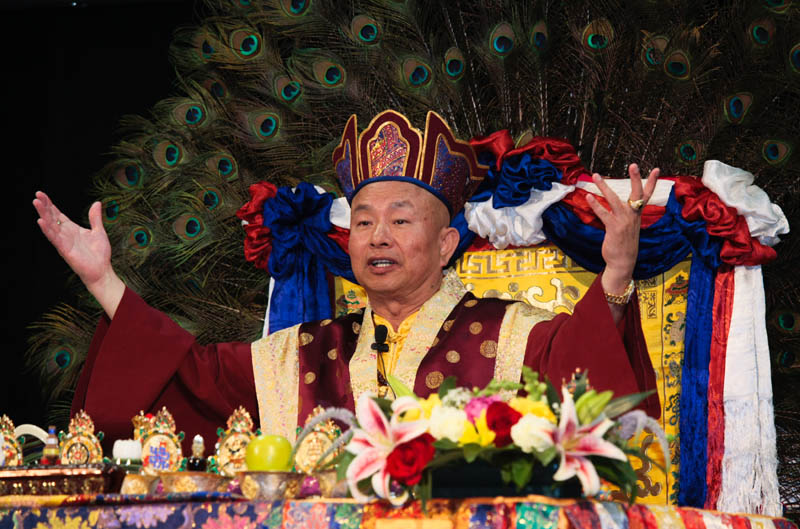