Grand Master Saturday`s Lecture, How to Truly Make Use of Heart

His Holiness Living Buddha Lian-Sheng, the root guru of the True Buddha School, attended the Saturday`s group cultivation on June 20, 2009. Supported by approximately two to three hundreds participants from all over the world; altogether, everyone bathed in the radiating Buddha light, listened to the lectures, and benefited from the Dharma bliss.

Master Lian Mai (釋蓮滿上師) lead the Mahacundi Dharma. After the group practice, Reverend Geo Rue (九如法師) gave speech on Far and Close (Distance) - The distance between the disciple and Grand Master is within the student`s heart. If Buddha is kept in one`s heart and constantly thinking of the Buddha, then this disciple is the closest to Grand Master.

Grand Master continued the lecture on The Platform Sutra of the Sixth Patriarch (六祖壇經): Learned Audience, the lost ones would just reciting the Prajna without complying its wisdom. There are illusion and bogus thoughts when thinking of the Prajna; if practice Prajna in every thought, then it is the true Buddha nature. The Ones who understands and able to comply with the Dharma is practicing the Dharma of Prajna Wisdom.

Grand Master explained the genuine meaning of this segment in just few simple words: Mindfulness (Use your heart, 用心). Practice Prajna in every thought is equivalent to being attentiveness. The lectures given by Reverend Geo Rue (九如法師) and Master Lian Mai (釋蓮滿上師) happened to cover the same topic: Mindfulness. During the lecture, Grand Master used a Zen story about a conversation between Shuan Sha Zen Master and Kua Shen Zen Master (玄沙禪師和桂琛禪師) as an example to explain in-depth of what are Mindfulness and true Buddha nature. Zen, in general, is to attentively realize the true Buddha nature with one`s heart.

At the end, Grand Master encouraged all disciples to continue putting efforts to think and to reflect with mindful thoughts until reaching the true Buddha nature of the universe.

After cultivation, Grand Master compassionately consecrated the Buddha statues, blessed the Great Compassion Water, and gave initiation empowerments to new disciples. Before leaving the main hall, Grand Master blessed each kneeled disciples; everyone received blessing, increased their faiths, and willingly to apply what were learned to daily lives. Everyone left with a heartfelt fulfillment. 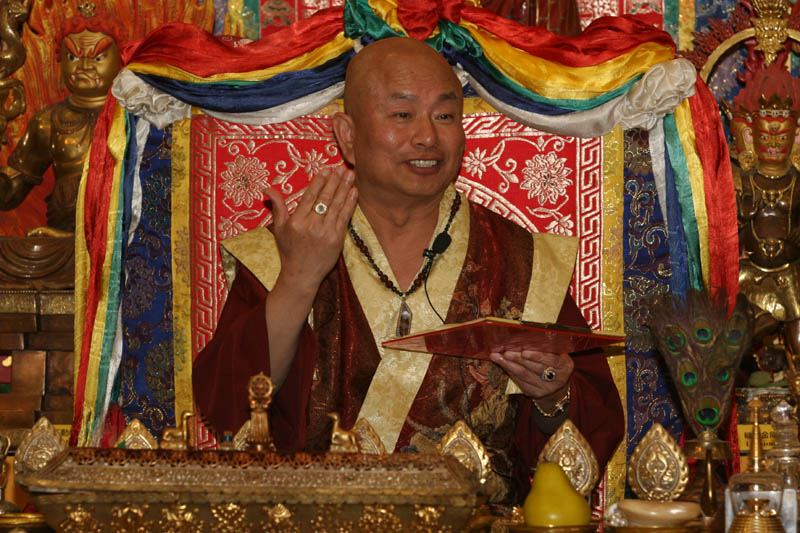