Grand Master`s Saturday Lecture: Mahaprajnaparamita (Great Wisdom) of the State of No Thoughts

Master Lian Zhu addressed in his Dharma talk on the importance of actual practice. Buddha nature is like a shadow that has never left us, but nimbly implementing our Buddha nature in our daily life is the true wisdom.

His Holiness Living Buddha Lian-Sheng first continued the lecture on The Platform Sutra of the Sixth Patriarch (六祖壇經). Learned Audience. Mahaprajnaparamita, from one Prajna leads to eighty-four thousands of wisdoms. Why? That is because worldly people have eighty-four thousands of filths and fatigues. If there is no such filths and fatigues, one`s wisdom is constantly appearing, and that never departs from his/her Essence of Mind. One who realizes this dharma has reached the state of no thoughts.

Grand Master then mentioned Dharma Assistant Gu Yen and Yan Li (俊瑛助教伉儷) from England were in the UA949 flight that made an emergency landing in Iceland after smoke was coming out from the engine room. The aircraft commander announced the preparation of abandoning the aircraft. Dharma Assistant Gu Yen and Yan Li sincerely chanted Root Guru`s mantra during the most dangerous moment. They saw Grand Master appearing in the sky holding the aircraft with both hands until safe landing. All disciples applauded for a long time after hearing this auspicious news; acclaiming and cheering for such a great teacher.

After the group practice, Grand Master compassionately consecrated the Buddha statues, blessed the Great Compassion Water, and gave initiation empowerments to new disciples. Before leaving the main hall, Grand Master blessed each kneeled disciples; everyone received blessing, increased their faiths, and willingly to apply what were learned to daily lives. Everyone left with a heartfelt fulfillment and Dharma joy. 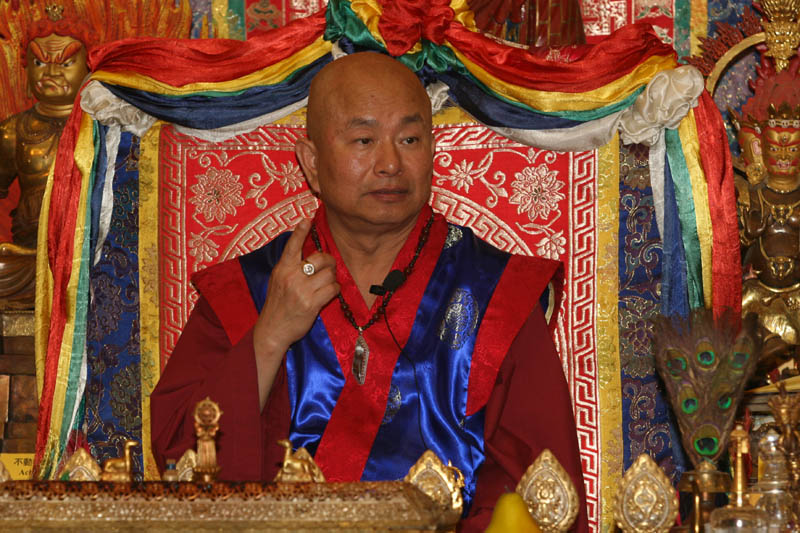