Early in the morning, Rainbow Temple was already bustled with lot of people from all over the world. In addition to seventy some Vajra Acharya Masters, there were also Dharma volunteers of various levels, special guests, fellow devotees, disciples, laity nearing over three thousand people from everywhere abroad had come to uphold the ceremony in earnest.

The Homa Ceremonial Hall and surrounding areas erected with tents were completely filled with people leaving no vacancy. The main palace hall of Rainbow Temple and consecrated rooms therein were equipped with large TV screens; the Ceremonial Hall was equipped with a simulcast and real-time internet broadcast system in place. Meanwhile, True Buddha devotees of the whole world were synchronizing to the rhythm and tempo of Grand Master’s execution of mudras in a succession, as well as tuning into the heart of Golden Mother of Jade Pond and the flaring and flickering flames of the Homa hearth intended for eradicating calamity, beseeching good fortunes and procuring wealth.

As the Homa ceremony started off with chanting of the Root Guru mantra(’Om, Guru Lian Sheng Siddhi Hum’), Grand Master and Vajra Acharya Masters were led in a procession into the Ceremonial Hall by the temple’s Ushering Team. The atmosphere of the temple was laden with formality and solemnness. The hostess guided audiences into the pace of the Homa Sadhana using her temperate and graceful voice; the Homa flames spiraled up just as gracefully. King of Dharma, His Holiness, Lian Sheng the Living Buddha , executed mudras with sanctitude and fluidity served to eradicate calamities and bring good fortunes for multitude of devotees and laity.

Grand Master expounded in his discourse, ’Why didn’t Buddha Sakyamuni entrust (Dharma Responsibility) to the wisest Boddhisattva Manjusuri or the most compassionate Avalokitesvara? ’ King of Dharma said, since the Buddha gave utmost importance to monasticism, Boddhisattva Ksitigarbha, who was at the time already a monk, was thus entrusted. King of Dharma, His Holiness, Lian Sheng the Living Buddha, indicated that True Buddha School has to conform to Buddhist rules and regulations, and people in monkhood to reassert and uphold Buddhism, whereas secular devotees to uphold Buddhism. Henceforth as per True Buddha School, no more secular devotees may be ordained as Vajra Acharya Master; all secular devotees must take ordination in monkhood and have achievement, and be certified by Grand Master in order to become a Vajra Acharya Master. King of Dharma mentioned, from the two hundredth to three hundredth year during the Buddhism’s diminishing period in the past, owing to lack of monks and nuns, there were secular devotees taking on the role of Vajra Acharya Master. Likewise, True Buddha School was under the same justification that it honored secular Vajra Acharya Masters.

Grand Master instructed devotees with strong words and deliberation that we ought to act out as a paragon for all sentient beings and practice the Thousands of Correctitudes from the Perfections of Six Virtues, Vajrayana’s Tummo Practice (sealing off vital elixir in the body, cultivating luminous energy drops, and Kundalini fire), opening of the Heart Chakra, seeing the quintessence of one’s own Buddha-nature, and attainment of the Buddha-nature realized through enlightenment, which are the utmost importance.
Grand Master cautioned devotees not to divulge the crucial key answer to unlock one’s enlightenment to a third party, lest that the divulger and recipient shall be doomed with heavy karma and condemned to hell. Only the enlightened ones may only hint at the context of the key answer, but not to expound explicitly the gist of the key answer or else all the involved persons will all be condemned to Vajra Hell.

Grand Master pointed out, upon enlightenment, one has to conform (subjectively and objectively) to the conditionality of being enlightened; all demeanors must be conformed to that of an enlightened one accordingly. The Boddhi Mind, Middle Path Mind and Renunciation Mind are to be accorded with, as well.

Lastly, Grand Master encouraged every devotee that regardless of whether a person is enlightened, monk or nun, Vajra Acharya Master, Dharma Lecturer, Assistant Dharma Instructor, or a lay person, to take up responsibility to redeem sentient beings, and hence be accorded equanimity.

Following that, Dharma Sister Hsu-Mei Wu and Dharma Brother Kai-Fu Lin representing Daden Culture Company, contributed $27,000 USD to Sheng-Yen Lu Charity Fund Foundation through Dr. Foching Lu Esq. who is currently the head of the foundation.
Immediately after that, Indonesian True Buddha School’s Vajra Acharya Masters, Dharma Instructors and fellow devotees conducted a simple yet solemn ceremony to address a Tantric Dharma bestowment request to Grand Master and Shimu who were implored to appear in person in Indonesia on a certain future date.

Finally, after the three-in-one combo empowerment was given to all attendees, every body respectfully sent off Grand Master and Shimu. Meanwhile, the Eight Classes of Devas and Nagas, once again, paid tribute to Grand Master and showered down mellow heavenly dew (on all attendees and the earth) cleansing every disciple of his or her negative karma. This was an auspicious sign that Grand Master had guided disciples to fathom the quintessence of our Buddha-nature, so as to become Buddhas. 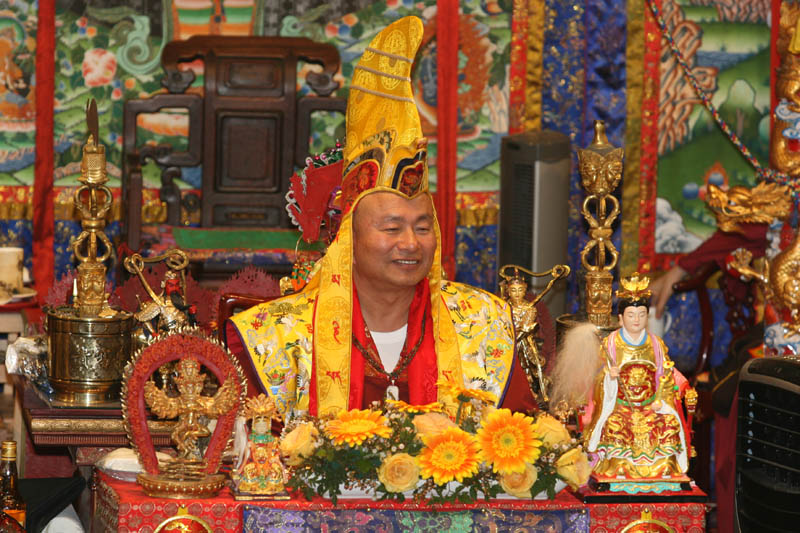