Silent Night, Holy Night... The mellow tune of Christmas carol resonated throughout the expanse of the atmospheric space; the warm currents of Christmas spirit blended in with the northerly winds; and, the torch of compassion burns on forever in the secular world. The equanimity of Christmas Eve intertwined with the diffusing savors of the delicacies and gourmet foods emitted from the pot-luck dinner held at 6:00 p.m. on December 24th at Grand Cafeteria of Ling Shen Ching Tze Temple. Harmony and serenity was subtly expressed in each person`s glance. Afar had come numerous incense-offering pilgrims whose automobiles filled the courtyard in front of the temple leaving no vacancy. Everyone brought in his or her specialty culinary dishes to share with everyone else on this festive occasion. The compassionate Grand Master and Grand Madam (Shimu), along with Grand Master`s son, Fochi and daughter-in-law, Sannie. Grand Master`s grandson and daughter were also present: Luhong and Lujun. Joining the Grand Master and His kin were the retinue consisted of Acharya Masters, Dharma Professors and Dharma Instructors, as well as numerous co-devotees all of whom had arrived on time for the dinner party to relish the Christmas pastime. The Grand Cafeteria was suffused with the ambience of Christmas festivity which also upheld the aroma of the delicacies and gourmet dishes. Every attending person was harboring a heartfelt gratitude towards Grand Master as to relish the ``joy of family togetherness`` with Him and His relatives. . Everyone joyfully chit-chatted ordinary day-to-day topics over the meal. The temple also prepared a huge birthday cake for December-born participants as an after-the-meal treat. A sweet amenity was added to the dinner party after everyone had sung the birthday greeting song.

In the interest of greeting the coming of Christmas holiday, Ling Shen Ching Tze Temple was adorned with beautiful and dazzling decorations on the inside and outside of the temple building. At 7:30 p.m., a Christmas Eve party was held in the main hall of the Ling Shen Ching Tze Temple. Everybody proactively registered to perform in hopes that he or she may be heralded as one of the glamorous celebrities of the True Buddha ``celestial constellation`` for the evening, so as to bring out one`s own inborn best talent as an offering to the Buddha. The participating performers sang and danced happily to their heart`s content. Amongst all performances, a song sung by Grand Master`s son, Fochi was the most fascinated piece of performance which was responded with thunderous applause from the audience in the venue. Next, Grand Master was invited and spurred on by the audience to sing two classic, popular Chinese songs on the heels of Fochi`s performance. The wonderful songs sung by Grand Master had struck a cord in everyone`s heart and was accorded with thundering applause and cheer as well as requests for encores. Grand Master left His encores for Fochi to complete; Fochi then performed a breakdance at the warm invitation of the audience which was hard to stumble across in thousands of years. Fochi`s movements were natural, brisk, elegant, sophisticated, graceful, full of finesses and well balanced in dexterity. The audience cheered along with rhythmic applause in sync with Fochi`s dance. Following Fochi`s performance is gift exchange through prize drawing by lot. The compassionate Grand Madam, Shrmu, who prepared two pieces of exotic gift for the audience to draw lots on. The two gifts were won by two Dharma sisters whom were then admired and praised by the rest of the onlooking audience. There were other fortunate co-devotees who also won valuable prizes among over a hundred pieces of gifts (or prizes); the winning was consequential on their good karmic fortuity bestowed affinitively by Buddhas and Boddhisattvas. Next, Grand Madam, Shrmu led the whole audience in the venue to do the ``oxygen-themed`` exercise so as to loosen up and rejuvenate everybody`s ligaments, muscles and tendons, and to freshen everybody`s mind as well. As the party pressed on, the next and last piece of performance was by Grand Master doing Vajra Fist Kung Fu form as a way to empower every attendee to have enhancement of blessings and wisdom.

The Christmas party drew to a close while everybody`s fervor to be entertained was still lingering on. The company of disciples and devotees congratulated Grand Master and Grand Madam (Shrmu) and wished them an auspiciously happy Christmas, but hesitantly bade farewell to them and finally sent them off at last. Everyone was astonished by the view of the outdoor which was completely cover with a coat of white snow; the roof shingles and the grass lawn were under a sheet of ``white cloth.`` Earlier, the Christmas Eve started out with no precipitation of snow, then as the evening wore on, a classic scenic view of snowy Christmas weather miraculously cropped up: this was indeed the wonderful works of heaven. May the Christmas Eve be wondrous! 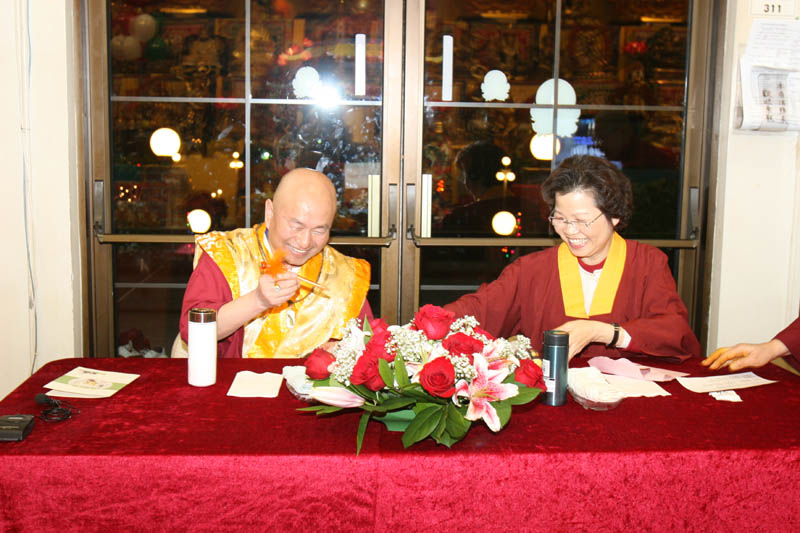 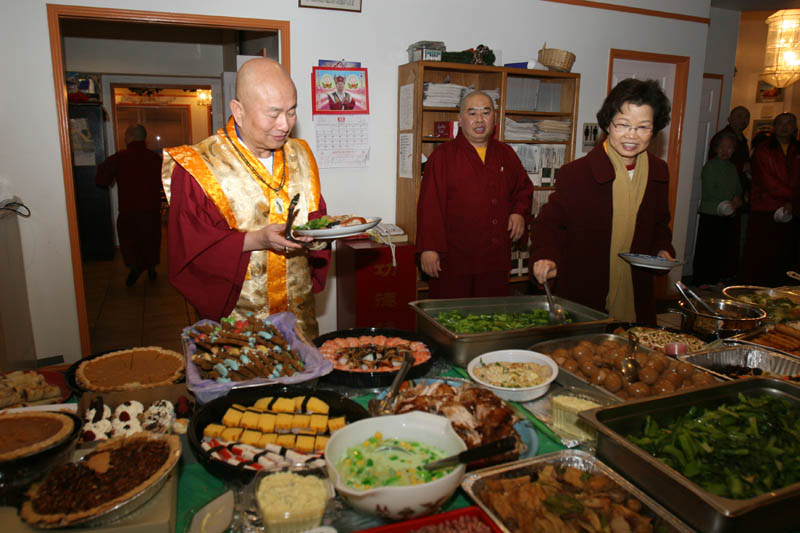