As Buddha-dharma stands in the secular world, one has to skillfully utilize the various expedient wa

The founder of True Buddha School, Grand Master, the Living Buddha Lian-Sheng had once wrote this in one of His books: 「To give of oneself is the authentic way of alms-giving. By giving of one`s own entire life unselfishly, such life shall be devoid of vacuity. Being predisposed to give extensively to the cause of charity without demanding reward and/or recognition is genuine alms-giving」. Five millions True Buddha disciples abide by the teachings of Grand Master and stand on the magnanimous principle of Buddhism by reaching out both philanthropic hands to the needy and the ill-fated in the far-reaching recesses.

Consular Dong-Zhou Liao delivered a formal address wherein he congratulated the successful accomplishment of Grand Master`s dharma propagation mission in Taiwan, and acclaimed the outstanding alms-giving action on the part of Grand Master.
The purpose of Consular Dong-Zhou Liao`s personal appearance at Ling Shen Ching Tze Temple this time is to represent Taiwan government in thanking True Buddha School for all the philanthropic actions and donations rendered to the cause of disaster relief efforts of the aftermath left behind by Morako Hurricane or Typhoon in southern Taiwan.
Specifically speaking, Lotus Light Charity Foundation of True Buddha School had outstandingly assumed the enormous burdens and responsibilities of rebuilding the infrastructures in the disaster-stricken area, in addition to preparing over 6000 meals to the surviving victims on a daily basis during the disaster relief period.
Moreover, Lotus Light Charity Foundation had also outperformed the government in speed in so far as coordinating disaster relief efforts with the local municipalities in bridge rebuilding, and thereby rapidly helped the surviving victims pull through the crisis.
The Lotus Light Charity Foundation in the southern division had adopted the mindset of ``drowning oneself in the shoes of the drowned`` (人溺己溺) in the disaster relief efforts. There are three bridges that were confirmed to be under the reconstruction efforts of Lotus Light Charity Foundation: the first one is in Six-Turtle Village of Kaoshiong County (高雄縣六龜鄉荖農段), the second one is in Taoyuan Village of Kaoshiong County (高雄縣桃源鄉桃源鎮桃源村四社溪) and the third one is in the vicinity of Minsheng Elementary School of Kaoshiong County (高雄縣那瑪夏鄉民生國小旁達卡努瓦段418號~386號的【蓮生一號橋】)(now is named ``Lian-Sheng No. 1 Bridge``). The reconstruction work has been taken up by Jia-Yi Charity Group and the Lotus Light Charity Foundation has donated the costs of construction materials to this effort, which is projected to be completed by February of 2011.
Free medical checkups are continued to be administered to every affected locale of the disaster-stricken area.

In the interest of expressing heartfelt gratitude towards all charity functions of True Buddha School and to Ling Shen Ching Tze Temple, a wall tablet bearing a commendation in Chinese calligraphy: ``Meritorious services provided to rescue and help`` (功資拯濟), which was brought along by Mr. Ying-Yi Wu, the director of Taiwan Oversea Mission. Consular Dong-Zhou Liao also amazingly acclaimed True Buddha School to be a true alms giver without attachment to anticipation of reward.

Thereupon, Acharya Master Der-Huey (德輝上師) indicated in his dharma lecture that in order to receive the empowerment of lineage from one`s lineage root guru, one must abide by these three precepts: (1) taking spiritual refuge, (2) be respectful, and (3) be obedient. The follower must look upon his/her teacher as a Buddha; always consider highly of the teacher`s virtues and must disregard His shortcomings. Had the follower lost single-minded faith, confidence or credibility in his/her root lineage guru, then it would be difficult for him/her to have any achievement in Tantra-dharma.

Next, the King of Dharma, Grand Master Lian-Sheng resumed His ongoing exposition of the book ``The Altar Sutra as Spoken by the Sixth Patriarch,`` 《六祖壇經》 specifically on the chapter of ``Prajna``:

Those who intend to be the teachers of others
Should themselves be skillful in the various expedients which lead others to enlightenment.
When the disciples is free from all doubts
It indicates that his Essence of Mind has been found.
The Kingdom of Buddha is in this world,
Within which enlightenment is to be sought.
To seek enlightenment by separating from this world
Is as absurd as to search for a rabbit`s horn.

Grand Master expounded the quoted excerpt that only within this world can Buddha-dharma be found which shall lead to attainment of Self-realization or Enlightenment. In order to redeem sentient beings and to discern the quintessence of Buddha Nature, one has to skillfully utilize the various expedient ways and means.
The quintessential Buddha Nature is intrinsically formless and phenomenon-less; upon ending all doubts in Buddha-dharma, the immanently latent Buddha Nature shall emerge. Grand Master counseled every aspirant to cultivate himself/herself to the point of non-duality and that enlightenment and practice shall become complete and perfect.
Upon attaining enlightenment, one`s demeanor has to be rendered compatible with it, so as to manifest the attributes of enlightenment and the Essence of Mind. If one is able to discern the quintessence of Tathagata Buddha in this lifetime, then his/her spirit shall be fulfilled. Only through discernment of the Buddha Nature, one can come to realize the most priceless significance of life, as well as the most invaluable and meaningful truth.

After conclusion of Grand Master`s dharma lecture, Grand Master compassionately proceeded to bestow the invaluable Refuge Empowerment on new initiates, to bless the Great Compassion Dharani water and to enshrine the Buddha statues and effigies. Grand Master also bless-empowered all the disciples who kneeled down along both sides of a human aisle awaiting His auspicious wishing upon them. The magnitude of Grand Master`s compassion is way beyond the etiquette of the mere words ``thank you`` that we are beholden to. 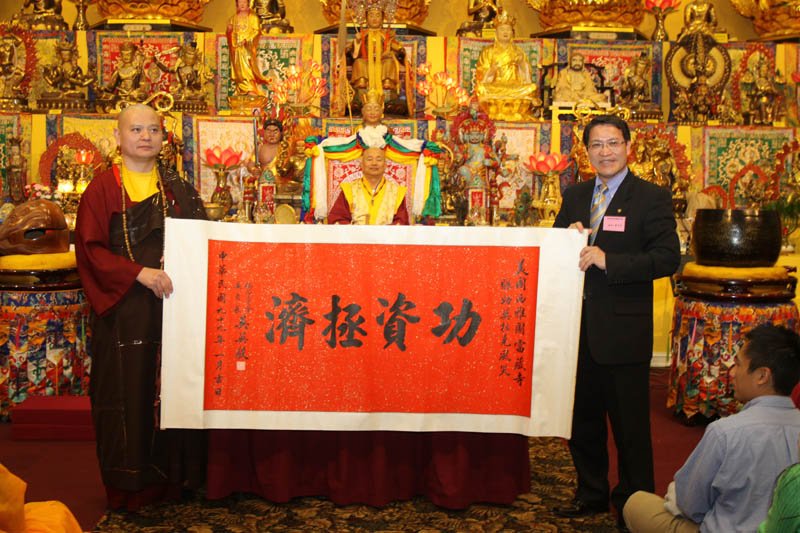 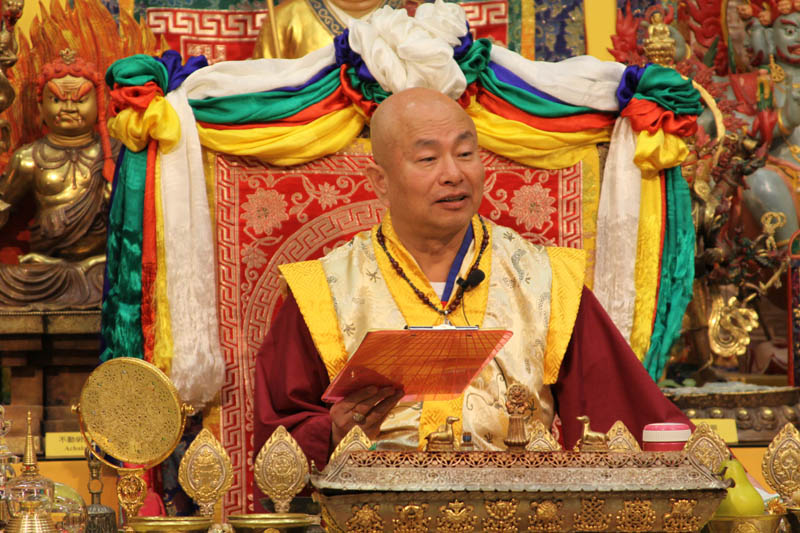 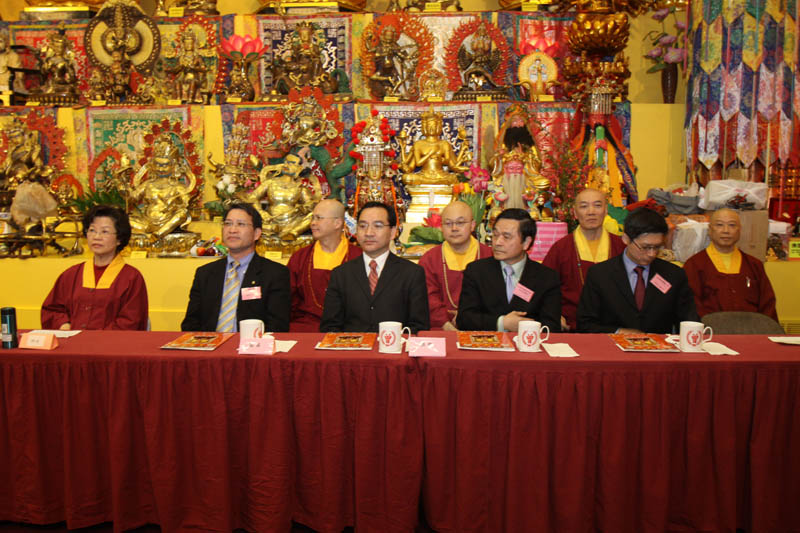 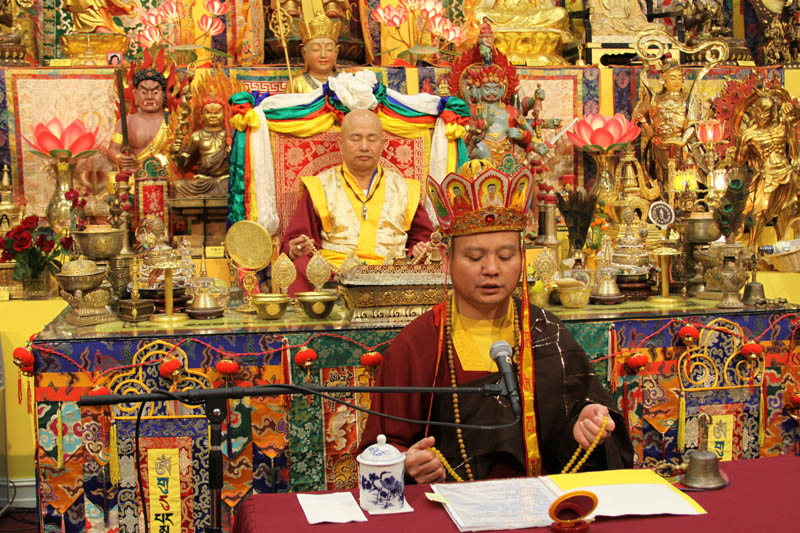 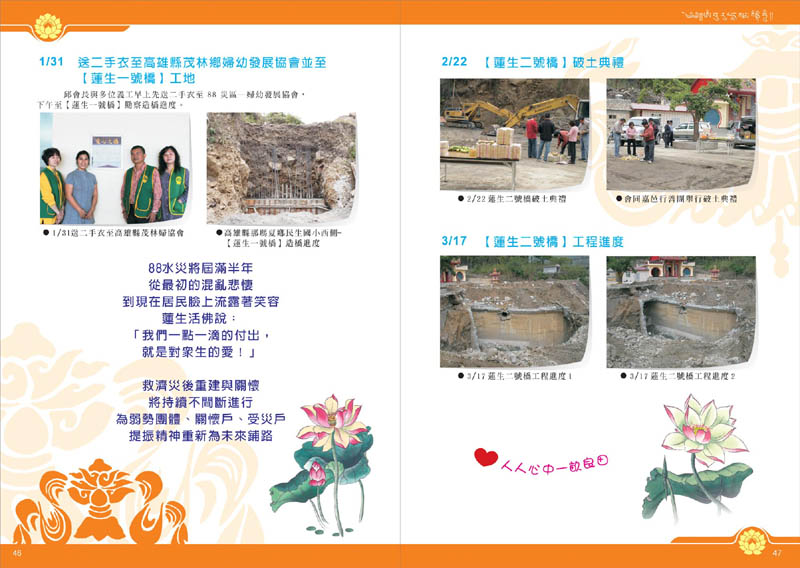 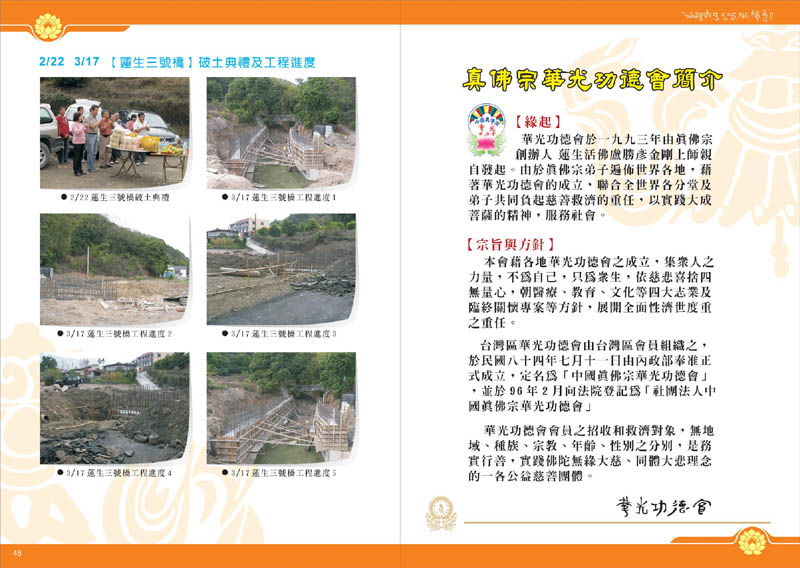