Over 5 million disciples of the Four Groups have expressed their most heartfelt gratitude via True Buddha School media, e.g. True Buddha newspaper and magazine, towards Grand Master in commemoration of His 24th anniversary of taking an ordination oath in monkhood『聖尊蓮生活佛出家24周年紀念日』.

There was a flurry congratulating notes from numerous disciples commemorating this milestone as seen in the latest True Buddha news publications.

The kitchen staff on duty that day prepared various delicious delicacies in addition to all sorts of gourmet dishes brought in by co-devotees from outside, such as sushi, spring rolls, fried noodles, rice cakes, pastry, etc., which can be Chinese, Japanese or American style of food. The foods and gourmet dishes were very appetizing and mouthwatering.

The Grand Cafeteria was adorn with traditional Chinese lanterns, ornaments and a wall placard displaying ``Congratulate Grand Master`s Anniversary of Ordination in Monkhood with Best Wishes for Auspiciousness and Happiness.`` A harmonious and auspicious ambience permeated the whole cafeteria amid the aromas which emitted from the palatable gourmet dishes; all guests were expressing joyfulness and fortuity. Everyone chitchatted very happily over most subjects conceivable; the finale of the banquet was to invite Grand Master and Grand Madam to cut the big round cake firsthand, as a way to bestow blessings on all participants. Thereupon, devout disciples respectfully offered fresh flowers to Grand Master and Grand Madam as a gesture of congratulation.

At the conclusion of the banquet, every disciple waited patiently at the main temple hall for Grand Master to lead the participating group to pay homage and circumambulate the Buddhas and practice Taichi exercise.

Thereafter, a duet performance of violin and cello was carried out by the son and daughter of Liu`s family from the neighborhood. Grand Master led everyone as a group in doing a tendon-stretching exercise rejuvenating everybody`s heart. 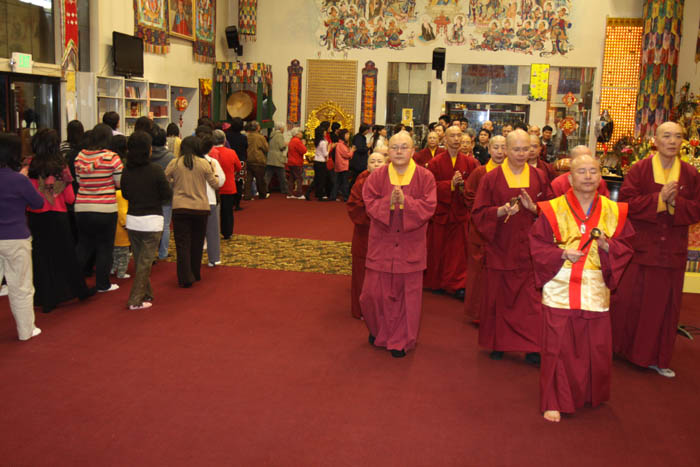 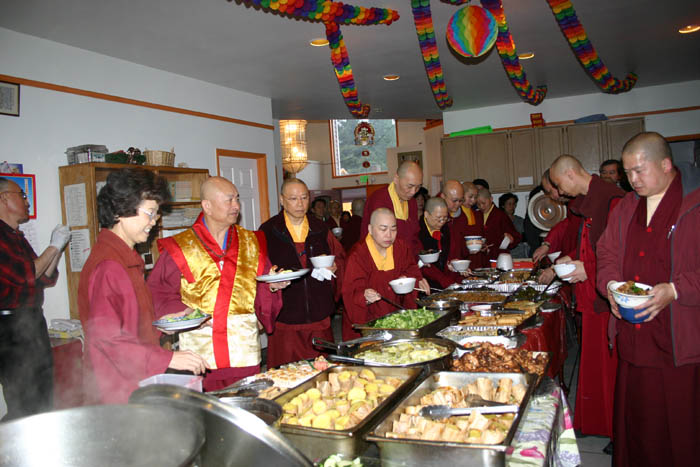