In the interests of fulfilling the wishes of the multitude, the King of Dharma of True Buddha School has dedicated His time and energy for weeks on end to conduct homa ceremonies despite all the hardship.
In the morning of April 4th of 2010, the main ceremonial hall of Rainbow Temple was already bustling with people. Missionaries of all levels, dharma brothers/sisters and devotees from all over the world have come to assemble hither to uphold the venue with intense enthusiasm.

At 3:00 p.m., upon Grand Master`s ignition of fire in the homa hearth, the whole venue of assembly swiftly merged into Dharma Realm of the utmost sanctity. The Principal Deity`s mantra ``Om。 Juri。 Kalarupa。 Hum。Kam。Svaha`` resonated throughout the whole premises of Rainbow Temple and the expanse of Heaven.

The disciples of the Four Groups assimilated themselves in the up-roaring blaze of the homa hearth as the King of Dharma, Grand Master Lian-Sheng interfused Himself with Yamantaka Tutelary Deity, thereby purged everyone`s body and mind of karmic defilements.

After the homa ceremony ended, the King of Dharma Lian-Sheng went on to deliver Himself of a dharma lecture. Grand Master thanked Yamantaka Tutelary Deity for His presence at the homa mandala shrine and wished to bring forth an assurance in His name and in the great dharma power of Yamantaka that all the wishes of the multitude of sentient beings be fulfilled.

Thereupon, Grand Master continued on with His lecture on the book, ``Bliss in Great Emptiness`` 《喜金剛講義》. This lecture covered the topic on ``Cultivation Sadhana (procedure) Dedicated to Principal Deity``: ``Intoning Praise upon Emergence from Contemplation.`` The King of Dharma, Grand Master Lian-Sheng has taught aspirants how to praise (his/her own) Acharya Master, Principal Deity, Dharma Tutelary and every person.

The multitude of yogis and nuns circumambulate the Honorable One.
The Honorable One has attained supreme consciousness.
Be it in motion or at a standstill, He is all wonderfully majestic.
Evoking great compassion to redeem all sentient beings.
Imaginary-mind-themed Vajra deity has cultivated consciousness fruitfully.
Vajra Heruka is thus earmarked.

The King of Dharma, Grand Master Lian-Sheng then expounded the above passage as follows:
1. The multitude of yogis and nuns circumambulate the Honorable One:
Yoginis from all 8 directions, Four-Armed Yoginis and Goddesses from 20 Heavens circumambulate Hevajra Deity.
2. The Honorable One has attained supreme consciousness:
Hevajra has attained the supreme consciousness, which is equivalent to
anuttara-samyak-sambodhi.
3. Be it in motion or at a standstill, He is all wonderfully majestic:
The Honorable One reaches out physically to redeem worldlings or enter deep contemplation; these wonderfully majestic demeanors all befit Hevajra.
4. Evoking great compassion to redeem all sentient beings:
Utilizing all expedient ways and means, along with compassion, to redeem all sentient beings in a likewise manner as a Boddhisattva.
5. Imaginary-mind-themed Vajra Deity has cultivated consciousness fruitfully:
Hevajra is essentially an emanation of Vajrasattva; the so-called Imaginary-mind- themed Vajra is a honorable Vajra Deity who was thus created out of cultivating the mind and through interfusion.
6. Vajra Heruka is thus earmarked:
The earmark of the Honorable One is Vajra Heruka itself.

The King of Dharma indicated that the emphasis in the above stanza is on praising Hevajra Deity.
Upon conclusion of the dharma lecture, Grand Master bestowed the highly treasured ``Yamantaka Tutelary Yoga`` empowerment on all participants. 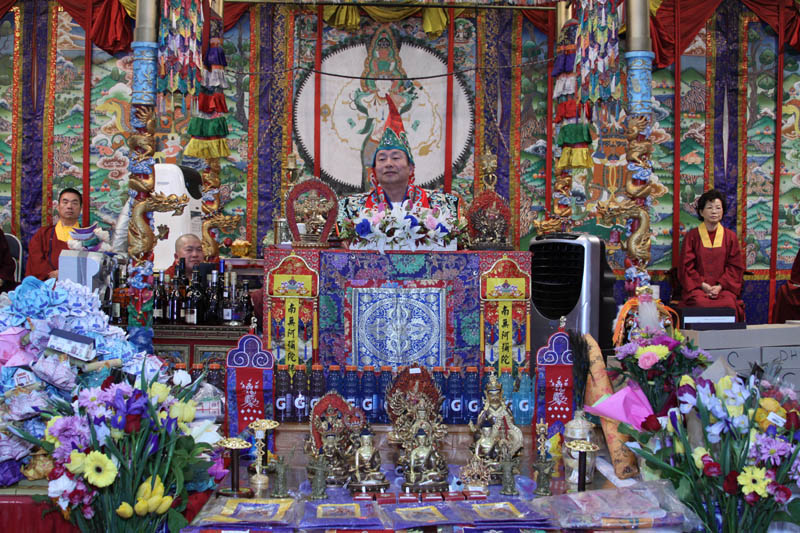 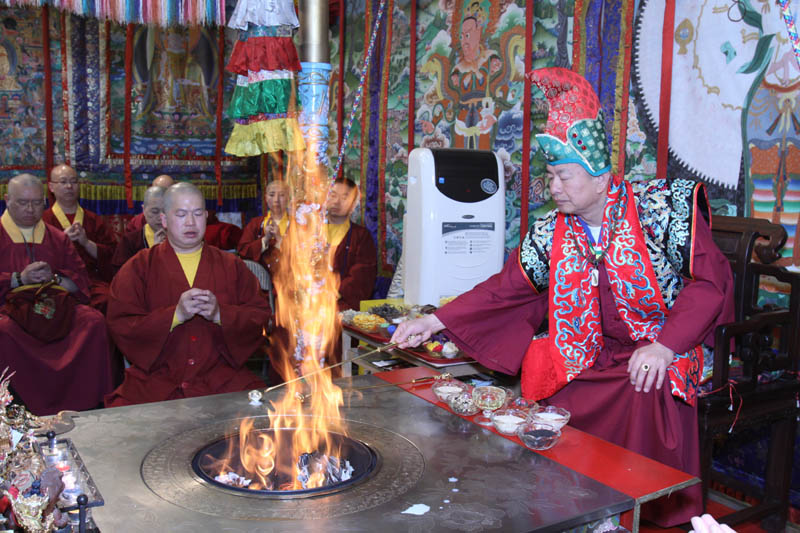