Interacting between a question and an answer, the multitude of worldlings are thus benefitted 『 一問一答

The weather was cozy and clear; the sun radiated warmth onto everything below. The oriental cherry blossoms in the surrounding hedges of Ling Shen Ching Tze Temple have spawned and bloomed fully, which coupled with graceful and beautiful scenery have brought forth joy in everybody. Afar have come disciples from all over the world who were eager to behold the countenance of Buddha and to listen to His dharma oration.

Upon conclusion of the group cultivation session, a dharma lecture was first delivered by Dharma Instructor Lian-Yeh in which she pointed out the importance of observing code of precepts, and that the aspirant ought to diligently cultivate the Repentance Dharma and avoid relapse into committing bad karmic deeds again. Thereupon, Lian-Zhu Acharya Master lectured on the significance of being mindful of ``impermanence`` in life; to constantly remind oneself of the importance of diligent self-cultivation. All the worldly wealth and assets, all the rights and wrongs would become zilch upon occurrence of ``impermanence`` and all of them shall become utterly useless in the end.

The King of Dharma of True Buddha School, Grand Master Lian-Sheng resumed His ongoing recitation on the book ``The Altar Sutra as Spoken by the Sixth Patriarch,`` specifically on the Third Chapter dealing with ``Questions and Answers``:

One day Wai Tsi Si entertained the Patriarch and asked him to preach to a big gathering. At the end of the feast, Wai Tsi Si asked him to mount the pulpit (to which the Patriarch consented). After bowing twice reverently, in company with other officials, scholars, and commoners, Wai Tsi Si said, ``I have heard what Your Holiness preached. It is really so profound that it is beyond our mind and speech, and I have certain doubts which I hope you will clear up for me.`` ``If you have any doubts,`` replied the Patriarch, ``please ask, and I will explain.``

Grand Master expounded the above passage with respect to the fact that the world is full of queries. Sentient beings` lack of understanding consequently leads to uncertainty. On account of the confusion regarding a two-sided alternative as posed by the worldlings or the need to profoundly understand Buddha Nature has thus given rise to uncertainty.

A genuinely enlightened person is free of all doubts. So long as the aspirant realizes Buddha Nature and follows the teachings of Buddha to the letter, it won`t be a daunting task to get on in the world.

Thereafter, the compassionate Grand Master bestowed the precious Refuge Empowerment upon the new initiates, blessed the Great Compassion Dharani water and enshrined the Buddha statues and effigies. Grand Master also bless-empowered every disciple who kneeled down along each side of the human aisle. All participants felt beholden to Grand Master. Everything was auspiciously satisfactory and appeased. 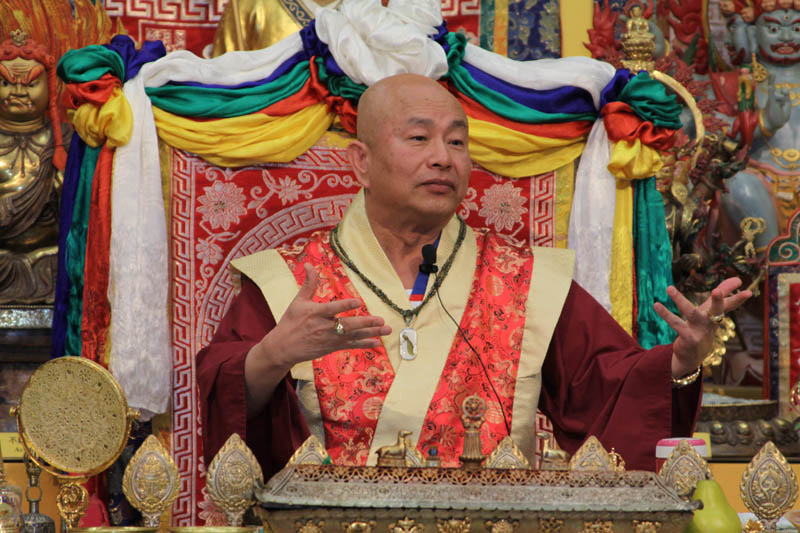