Seattle has been progressively and stealthily engulfed in a genre of autumn abstraction; countless fallen leaves have littered the ground in golden yellow.

The principle deity practice of Ksitigarbha Boddhisattva was the underlying theme of the weekend group cultivation at Ling Shen Ching Tze Temple on October 1st of year 2011. Afar had come disciples from all over the world; their steadfast observance of honoring the teacher, commitment to the Dharma and conscientious practice was still devoutly intense.

Shortly prior to the commencement of the group cultivation session, Grand Master Lu and Grand Madam (Acharya Lian-Xiang) stately arrived at the Temple and greeted the attending disciples and bestowed blessings on the cultivation session ensuring that everything is satisfactorily complete and auspicious.

After the completion of the group cultivation, amongst special guests was a Council Member of King County of Washington State - Ms. Jane Hague, who said in her address that, ``She is very fortunate to be able to partake of and share the group cultivation tonight. Everyone has received the blessing radiances. She is a council member to the King County Council and wishes to continue to serve the public. Thanks for everyone`s help.``

Thereupon, Grand Master continues to expound the Altar Sutra as Spoken by the Sixth Patriarch, specifically the chapter on The Gradual School and Sudden School.

Grand Master Lu, in His dharma oration, He counseled all disciples against playing on words in the process of discerning (the quintessence of reality) through meditation and against plagiarizing passages from Buddhist canons or someone else`s Buddhist gathas written previously. Even though what you wrote may be congruous with the quintessential Buddha nature, but it does not belong to you per se. You have to know thyself and how to extrapolate (from thy insight).

The Buddha nature and Thusness are very difficult to discern, not to mention 「seeing」. 「Knowing」 is not bi-lateral and is not relative; likewise,「seeing」is not bi-lateral. This kind of 「seeing」and「knowing」is deemed authentic, and is thus called the「Ultimate」.

Grand Master Lu said: Being in the temporal world, one must cultivate oneself steadfastly in buddhadharma with persistence and resoluteness. One should progress in his/her spiritual cultivation by gradation.

Don`t expect to attain the pinnacle of achievement with one bound; do not revel yourself in fantasy and delusion; also do not luxuriate yourself in daze and tardiness so as to enter the dhyana state and thereby attaining the genuine state of cognition.

Grand Master has committingly been cultivating for 40 years whereby the comprehension of non-existence and non-annihilation, non-increasing and non-decreasing, non-immaculateness and non-defilement, non-beginning and non-ending is attained.

Grand Master also urged every disciple to discern through meditation as to what is the ultimate state of Void and what is the ultimate state of Being, why there is reincarnations conditioned on the principle of cause and effect. Grand Master said, there is only one absolute answer to all these questions. He encouraged everyone to effortfully discern (the answer) through meditation.

Thereupon, Grand Master bestowed refuge-empowerment, blessed Great Compassion Dharani water and Buddha statues and effigies, and other Buddhist implements. Upon departure, Grand Master at His magnanimous grace, also bless-empowered all kneeling devotees by palming their heads and bade farewell to all participants with an auspiciously benevolent blessing. 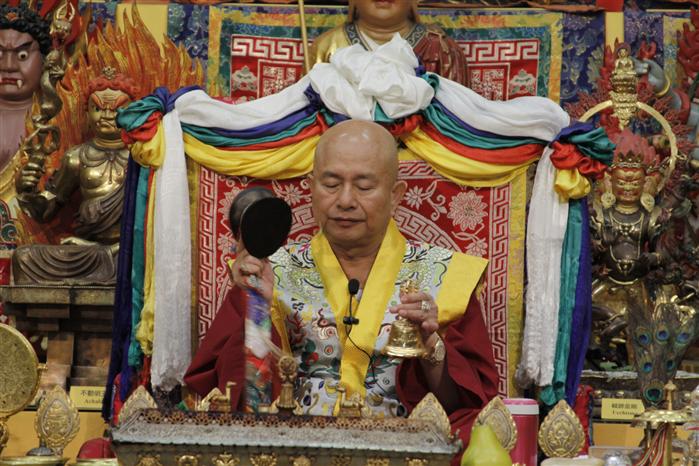