On September 5, 2009, the Amitabha Bardo Deliverance and Calamity Eradication Ceremonial Assembly had formally taken place at Lynnwood Convention Center in the name of Ling Shen Ching Tze Temple, which also included transmission of Maha Mayuri or Peacock Luminous King Tantra and empowerment thereof by Grand Master. The presiding Master over this annual ceremonial assembly was appointed to Vajra Acharya Master Shi Lian-Ning with respectful invitation of Grand Master to personally transmit the Uncommon Maha Mayuri or Peacock Luminous King Tantric Dharma. Multitude of devotees and fellow disciples had come far away from abroad totaling about three thousand, who were to receive the Tantric Dharma and to lend support to the ceremony. Ling Shen Ching Tze Temple staff had adopted the simulcast and real-time audio/video system to broadcast the event live to all True Buddha devotees, fellow disciples and laity throughout the world.

The ceremony started off with a congratulating letter from Washington State Governor, Christine Gregoire, announced in both English and Chinese by Dr. Foching Lu, who is currently the head of the Sheng-Yen Lu Charity Fund Foundation. Following that, Dr. Foching Lu presented a speech in the name of the Sheng-Yen Lu Charity Fund Foundation. She began her address by telling the audience that the charity fund foundation is motivated by a heartfelt Buddhist compassion, the objective of which is to encompass the needs for health, care, and education; to be driven by unselfishness and selflessness as a spirit to serve and to carry out alms-giving in the ten directions.

The Sheng-Yen Lu Charity Fund Foundation had contributed $20,000 U.S. dollars to the cause in the relief of the recent Morakot Typhoon disaster. Moreover, donation boxes were installed on the floor at the ceremony. All the donation proceeds collected that day were funneled to Taiwan Lotus Light Charity Foundation to further the home-rebuilding effort on behalf of the victims rendered homeless by the typhoon.

Dr. Foching Lu also mentioned that, in perspective of future, the Sheng-Yen Lu Charity Fund Foundation will progressively merge with charity functions of the True Buddha School so as to muster all the strength needed to further the charity efforts.

She also spoke on behalf of the Sheng-Yen Lu Charity Fund Foundation in expressing their deepest gratitude over the latest activities in charity sale fund-drive conducted by Daden Culture Company and Dasing Artifact Company; the proceeds collected from the charity sale also included the base cost (of the sale items), all of which was funneled to the charity foundation. The True Buddha temple of Chicago, U.S.A., had set itself up as a role model by initiating a donation of $50,000 to the foundation, by means of rivalry enticement, in hopes that other True Buddha temples and chapters will follow suit and thus promote the concerted charity efforts. The chairman of Taipei Culture and economic Office in Seattle, Ambassador Dong-Jou Liao, came in person to partake of the ceremony. In his address, he especially thanked Ling Shen Ching Tze Temple and Sheng-Yen Lu Charity Fund Foundation, working in conjunction with Taiwan Commerce Association, promoting the 88-Moratko Typhoon Disaster-relief fund-raising activity last week, for raising about $106,000 U.S. dollars dedicating to the disaster stricken areas of Taiwan. This amount of donation was assessed as the highest bid among six States in the Northwest region of the United States.

The Grand Master encouraged that every ordained disciple ought to respect the teacher, commit to the Dharma, practice diligently and redeem sentient beings with altruism. Following that, Grand Master went on to bestow the Transmission of the Lay Bodhisattva Precepts. He instructed the devotees of concern that the Boddhisattva Precepts are a great suite of precepts by which one must abide seriously and never let them lapse. One must bring forth the Boddhi Mind and to benefit others unselfishly and thereby becomes an authentic Boddhisattva. During the ceremony, in the wake of Grand Master, multitude of Buddhas and Boddhisattvas had come witnessing a newly wedded couple being sworn to marriage, which was then solemnized satisfactorily.

With the reverberating sound of mantra and the mystique of the Dharma tapering off towards the end of the ceremony, Vajra Acharya Master Shi Lian-Ning told the Tantra Dharma aspirers in earnest that one must follow steadfastly the mudras, mantras and every Sadhana proper so instructed by Root Guru, Grand Master as the sole basis of conditionality for one’s refuge taken. The Tantra Dharma aspirer should not beseech with an immodest attitude and ought to bring forth a immeasurably compassionate and clear quintessence of one’s heart. One must visualize a satisfactory Dharma abode, satisfactory Buddha virtues, satisfactory kin and satisfactory Sadhana as pertained to the Tantric Dharma techniques at hand, as well as perpetuate the here-and-now moment at which transmission of the Tantra had occurred.

Afterwards, this was what the multitude of devotees and laity had been waiting for: exposition on the transmission of Peacock Luminous King Tantra Dharma or Maha Mayuri Tantra Dharma. As pointed out in Grand Master’s exposition that the Buddha-Mother of Maha Mayuri Deity is a tantamount emanation of Vairocana Buddha and Tathagata Buddha, which is the Bliss Body of Amitabha Buddha and is also the Transformation Body of Sakyamuni Buddha. In other words, if one would self-identify and attune with the Buddha Mother of Maha Mayuri Deity, then he or she could also self-identify and attune with multitude of Buddhas. Relying on the ’joint mighty power’ of great many Buddhas, one can maneuver the predestinated Karma. Grand Master also expounded in a progressively expedient and humorous way on the specifics of the Tantra Dharma techniques of Maha Mayuri as to its mantra, mudra, offerings, visualization and oral transmission.

Furthermore, at the grace of Grand Master, various applications of the Tantric Dharma techniques were also taught, e.g., how to subside earthquake, how to gain wealth, how to pursue love successfully, how to cure an illness, how to subjugate evil spirits, etc., as well as how to cultivate in order to prevent natural and man-made disasters. This special Tantra Dharma is deemed very hard to come by in over hundreds of years.

The administrative unit sponsoring this ceremonial assembly: Ling Shen Ching Tze Temple, hereby directed heartfelt thanks to Root Guru, His Holiness, Lian Sheng for his compassionate and personal transmission of the unparallel and invaluable Tantra Dharma with empowerment. Special thanks also went to all participating guests for their attendance and congratulating addresses. Thanks to all the True Buddha Vajra Acharya Masters, Dharma Educators, Dharma Instructors, Dharma Lecturers, Assistant Dharma Instructors, fellow devotees and laity from all over the world to have come promptly to uphold this ceremony yearly with successful and satisfactory result, for their pious devotion to Grand Master and passion to lend support to the ceremony. With an earnest wish, may all disciples and devotees receive the True Buddha Dharma spiritual current in their heart and let it be passed on to the succeeding generations. 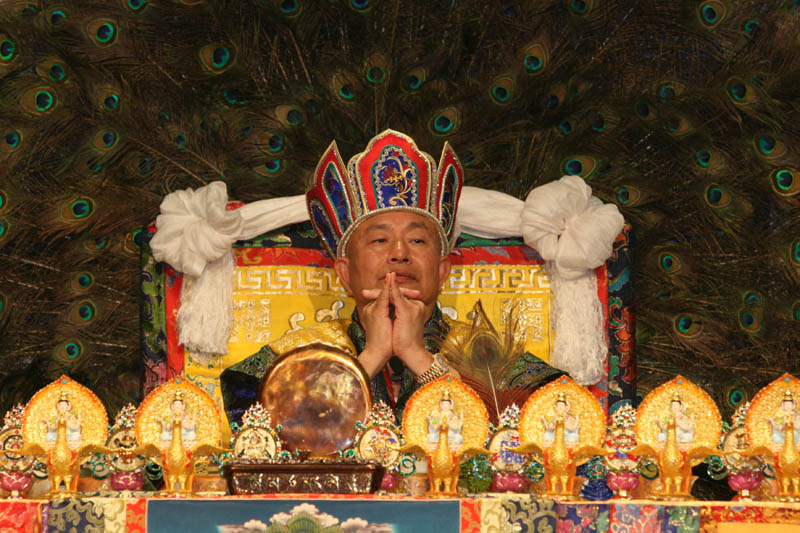