Debut transmission of the dharma of Yeshe Tsogyal, based on the Dharma King’s terma

On February 1, 2020, the eighth day of the first lunar month, Dharma King Lian-sheng presided over the homa ceremony of Avalokitesvara. This was the first time in a decade that Rainbow Temple had held a homa ceremony in Spring.

Grandmaster arrived very early at 10:30 am and proceeded to autograph his new book, “Pith teaching to the path of liberation”.

On this day, about 2,000 disciples worldwide congregated at Rainbow Temple, of which about 700 signed up to be main supplicants. The latter presented hata to the Dharma King -- it was especially meaningful to get blessings from White Padmakumara, Avalokitesvara and Yeshe Tsogyal at the start of the lunar year. The number of main supplicants was staggering, far exceeding the usual number for any ceremony held at Rainbow Temple. The passion of the disciples was so palpable that the bitter-cold of the winter was inconsequential at all.

The ceremony proved to be full of miracles and spiritual responses. Previously, during a ceremony to request for the Yeshe Tsogyal dharma from the Dharma King, hailstones had rained down. This day, during empowerment, there were hailstones again. These two occurrences were hardly coincidental because they defied meteorological stations' forecast of rain. In fact, the ceremony proceeded smoothly in fine weather; there was no rain at all. One could attribute such miracle to the sincerity of the Dharma King and the disciples. People had gathered together with the Root Guru despite the looming threat of coronavirus; it was a moving sight to behold as everyone arrived in support of the ceremony.

Many VIPs arrived for this homa ceremony. In addition, many political leaders from Taiwan sent in plaques inscribed with congratulatory messages.

The most perfect blessings
At 2pm, the Dharma King, Shimu and masters arrived at the homa shrine of Rainbow Temple.

The Dharma King, who was donned in red dragon robe and crown, performed the homa of Avalokitesvara. During the homa, the blaze of the fire was like the brilliance of Avalokitesvara. The dancing flames could be likened to Yeshe Tsogyal's vajra dance. The red and yellow fire could be analogized as the fire that burns away diseases, overseen by the Tara-who-saves-all-from-contagious-diseases! The Dharma King offered countless exquisite offerings to these three main Deities as well as all Buddhas, Bodhisattvas, Vajra Protectors and dakinis. He also performed the mudras of calamity-eradication, enrichment, magnetization and subjugation. The endless stream of dharma purified everyone’s mind and body.

During the ceremony, the following deities descended – the Three Sages of the Pure Land (Avalokitesvara, Amitabha, and Mahāsthāmaprāpta), Yeshe Tsogyal, Padmasambhava, Sharpyinma, Vajrayogini, Vajravarahi, the Guardian Buddha-Mothers of the Four Directions, the Dakinis of the Eight Directions, the Devas of the 20 Heavens, the five Longevity Devas of the Snow Mountains, the 12 Devas from the heavens of Mahasriya, Saraswati, the Tara-who-saves-all-from-contagious-diseases, Green Tara, the 21 Taras and countless deities. They bestowed the most perfect blessings to the attendees.

During the dedication of merits, the Dharma King beseeched Avalokitesvara, Yeshe Tsogyal and the Tara-who-saves-all-from-contagious-diseases, as well as the Three Sages of the Pureland, Padmasambhava, 21 Taras and all dakinis and sages to deliver all beings to the pure lands, bless participants with dew droplets, and eradicate diseases. He also wished everyone good health, longevity, wisdom, blessings, sufficient store of merits and fortune, steadfastness in lineage-belief, auspiciousness, fulfilment of magnetization and good cultivation practice.

After the homa, the Dharma King performed the renunciation ritual for four disciples. He encouraged them to devote wholeheartedly to the holy monastic life, follow Dharma teachings, and save all sentient beings.

Before the Dharma discourse, the Dharma King praised every disciple who had come to the temple from afar, despite the danger of the coronavirus.

Next Sunday, at 3pm, the Dharma King will hold the Seal-Removal Bodhisattva Homa Ceremony at Rainbow Temple. This Bodhisattva could wipe out all the five poisons, attachment ['self-grasping' in some translations] and ignorance that obscure the cultivator’s Buddha-nature. Everyone is welcome to participate.

The background of Yeshe Tsogyal
In the era of Shakyamuni Buddha, Yeshe Tsogyal was known as the "Goddess of the Ganges" or "Sadāprarudita". Her background was that of Saraswati and White Tara. When she was reincarnated as Yeshe Tsogyal, she became Padmasambhava's first and foremost Buddha-Mother in Tibet, and she was considered "the Mother of Buddha-Mothers".

Padmasambhava, Yeshe Tsogyal and Amitabha are therefore inseparable. Grandmaster wore red attire and crown for this day's ceremony because the common color of the three deities is red (for instance, Red Avalokitesvara).

The lineage of Great Perfection (Dzogchen) comprises Nine Vehicles of Dharma. The first three are Mahayana's Shravaka-yana (Shravaka vehicle), Pratyekabuddha-yana (Pratyekabuddha vehicle), and Bodhisattva-yana (Bodhisattva vehicle). The middle three vehicles are Kriya-tantra, Charya-tantra, and Yoga-tantra. Last but not least, there are the vehicles of Maha Yoga, Anuyoga, and Atiyoga.

These Nine Vehicles of Dharma of the Great Perfection (Dzogchen) were all imparted to Yeshe Tsogyal, who diligently practiced them until she achieved great attainment.

Today, Yeshe Tsogyal is regarded as not just a Buddha-Mother, but also a great teacher who performs mass-deliverance of sentient beings! Like Padmasambhava, she's never born; she's never died too. She will appear before any disciples upon request.

During this discourse, the Dharma King, who has attained the highest Atiyoga in the Nine Vehicles of Dharma of Great Perfection, publicly revealed the pith teachings of Padmasambhava based on the terma implanted in the Dharma King's mind by Padmasambhava.

The first pith teaching relates to "food". The practitioner "should feed on Qi!" Like the inhaling of Qi in Taoism, the Vajra practitioner inhales Qi into the dantien with full breathing. Then he or she distributes the Qi to the whole body and releases the Qi via the toes.

The second pith teaching is about "clothing" -- the practitioner uses Inner Fire as clothing. In Niguma and Naropa's Six Yogas, Inner Fire is regarded as the most important endeavor that a practitioner must undertake, for it is a treasure that enables the cultivation practices of Non-leakage and Lightdrops, eventually leading to great bliss and light-brilliance.

The practices of Nine-Cycle Breathing, Treasure Vase and Psychic Warmth are the tools used in cultivating Inner Fire. In fact, Inner Fire enables a practitioner to withstand the cold in the snowy areas of Tibet.

The third pith teaching is about "residence". Practitioners should practice in a location with good earth-spirituality. Padmasambhava and Yeshe Yogyal practiced at the Tai-ge Cave in Bhutan, where the congregation of Qi in the cave resulted in a superb spiritual environment. This was because the cave bore all the five important qualities of geomancy: dragon, cave, sand, water and direction.

In geomancy, the “dragon” signifies Qi emanating from the earth; the “cave” is where the Qi is concentrated; the “sand” refers to the surrounding environment; the “water” refers to the water on the outside. Whether or not homage is paid to the cave, and whether or not such an act would be beneficial to the cave, are dependent on “direction”. The Dharma King is an expert in geomancy himself.

The fourth pith teaching relates to "movement". This movement refers to “smooth flow [of Qi] in the bodily channels". Practicing the "Six-Day Body Exercises", “Yoga Fists”, or “Vajravarahi Fists” ensures good circulation [of Qi] to all parts of the body through the body's network of channels and meridiens. No illness would befall on a cultivator.

The fifth pith teaching involves the "body" in common terminology, "body, speech, and mind". Padmasambhava told Yeshe Tsogyal that when one is in the full-lotus sitting posture, one "sits like a bell", so that the body is in a state of non-motion and peace, and one enters Samadhi.

The sixth pith teaching is about "speech". The mouth should always be chanting the Buddha's names and mantras, foregoing mindless talking and chatting.

The seventh pith teaching relates to the "mind", which is based on the purity of the Buddha in entering Samadhi. In Samadhi, great bliss, light-brilliance and nature of emptiness will manifest.

“Visualization” means viewing everything in the world as empty. One should chant the emptiness mantra: "Om. Si-ba-wa. Su-da. Sa-er-wa. Da-er-ma. Si-ba-wa. Su-duo-hang". All possessions such as wealth, love and attraction, name and even body do not belong to oneself. Nothing belongs to anyone.

The second important point is about "spiritual cultivation". There should be a continuation of spiritual experiences in one's practice -- from [experiencing] great bliss, light-brilliance, and nature of emptiness, to eventually, attaining great perfection.

The third important point pertains to "action". One should endeavor to get rid of all false illusions and to obtain the most authentic dharma.

The fourth point is on "fruition", which is the perfect attainment of nirmānakāya, sambhogakāya, and dharmakāya.

Padmasambhava also taught Yeshe Tsogyal "compassion". Based on the Four Immeasurables, one should love one's enemies, and benefit others in whatever one does. One must guard the world with wisdom and kindness. Through diligent spiritual cultivation and actual practice of theory, one will attain fruition of bodhisattvahood and buddhahood.

The above-mentioned are essential in Atiyoga.

When Yeshe Tsogyal achieved attainment, she became a blue light that entered the rainbow, leaving behind her hair and nails in this world. Currently, Yeshe Tsogyal and Padmakumara are helping and saving sentient beings in the Akaniṣṭha heaven!


The Dharma King wishes to go Wuhan to alleviate sufferings
In the new lunar Gengzi Rat year, the Wuhan plague came on very aggressively, like a snarling cat. The Dharma King hoped that everyone would be as agile and observant as mice, in order to avoid all disasters.

In accordance with the teachings of Padmasambhava, the Dharma King made a great compassionate vow: He’s willing to go to Wuhan, China, to bless Wuhan citizens on the crown for their health. He also prayed that Padmasambhava, Yeshe Tsogyal and all dakinis will accompany him to do so. The courage of the Dharma King impressed and moved every disciple who heard it!

After the end of the discourse, the Dharma King bestowed the empowerment of the dharmas of Avalokitesvara, Yeshe Tsogyal and the Tara-who-saves-all-from-contagious-diseases on everyone. At this time, the sky above us rained down hailstones. Such an auspicious sign was a perfect ending for the perfect ceremony.

We hope that all will undertake the path of spiritual cultivation, until they attain the fruition of Buddhahood. 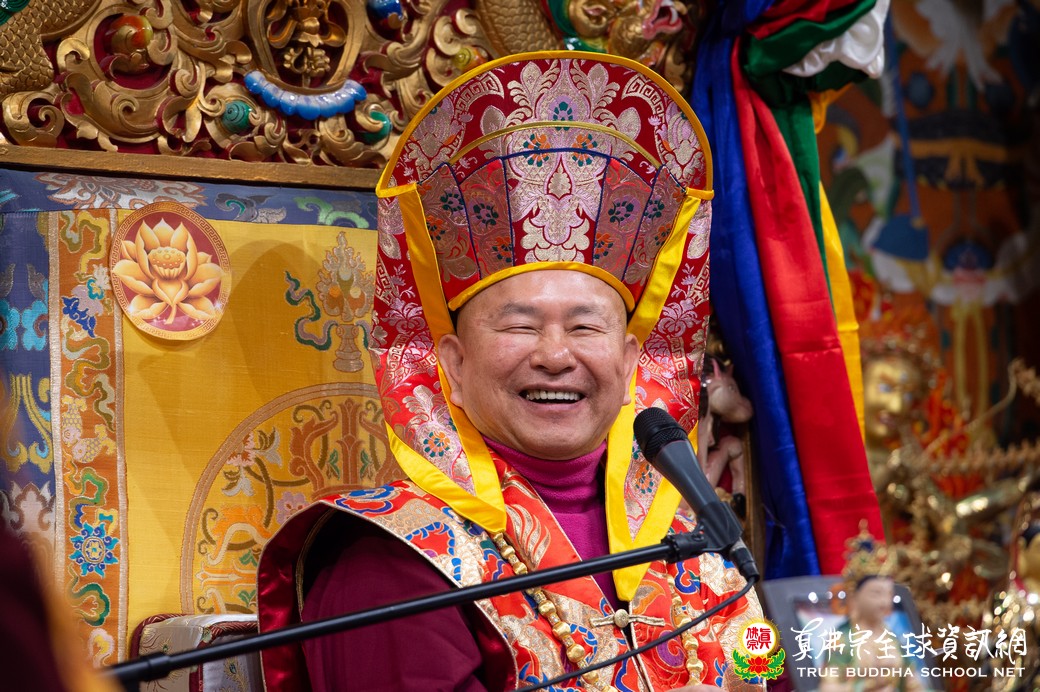 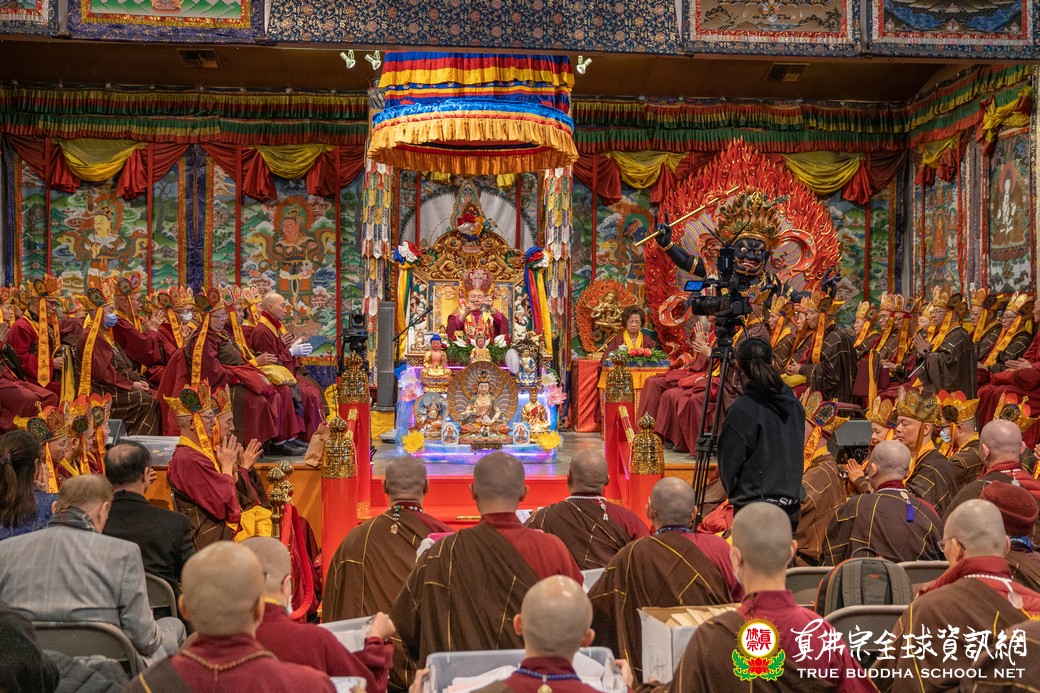 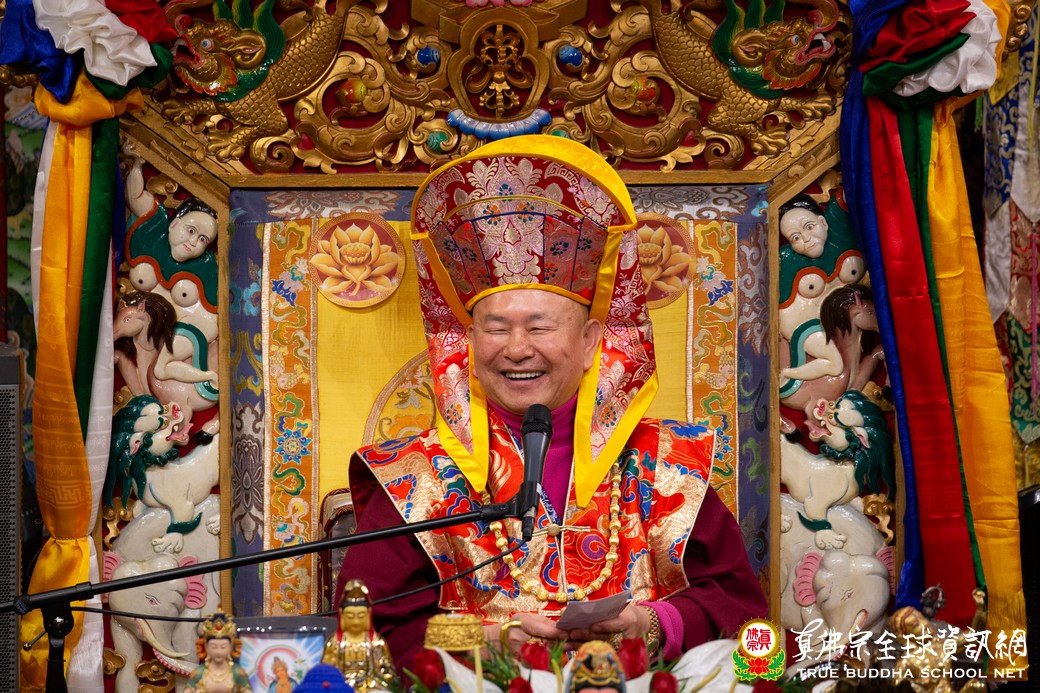 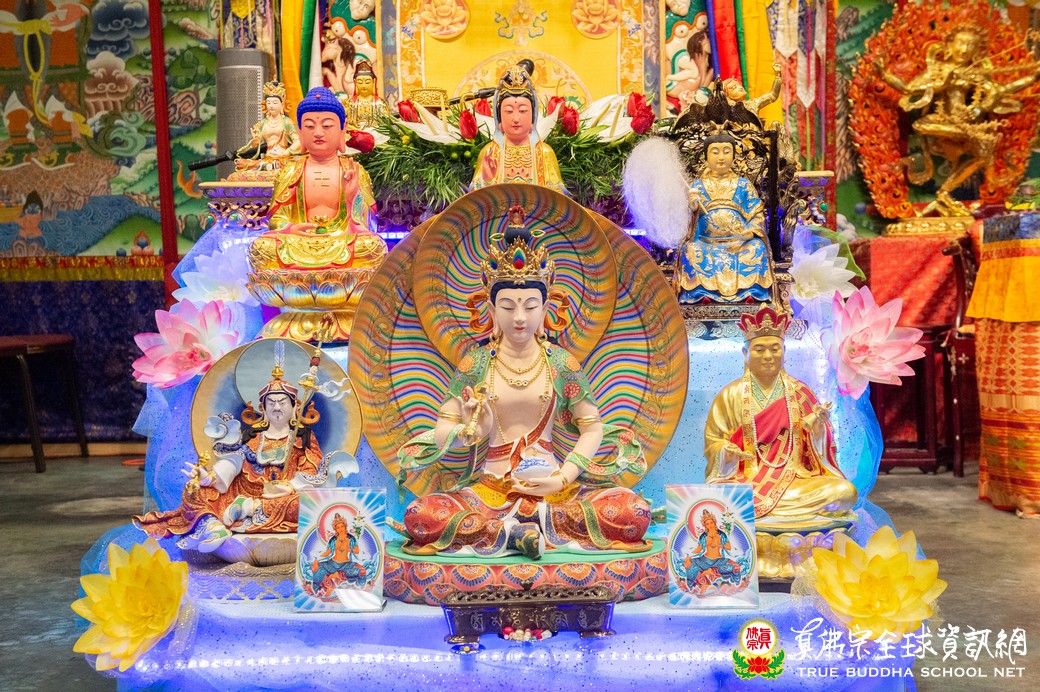 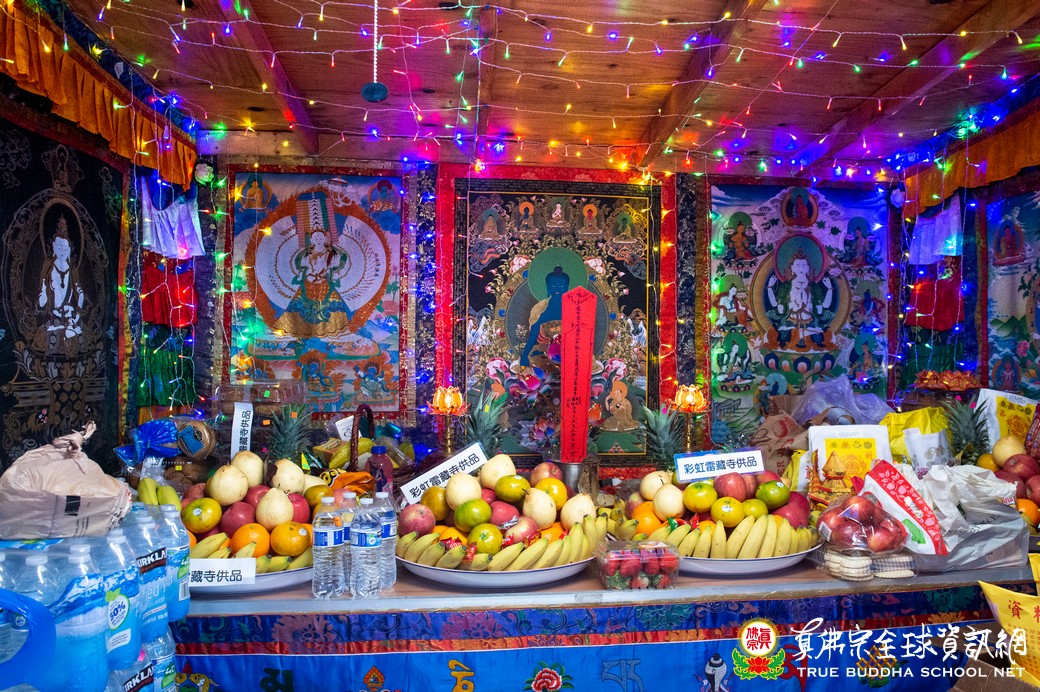 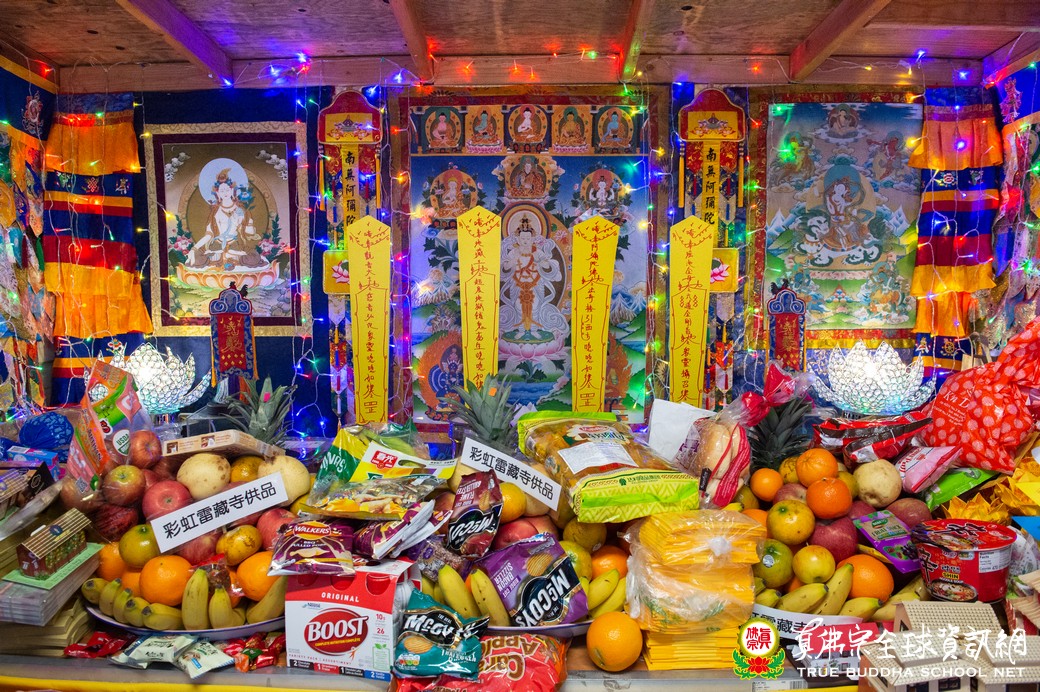 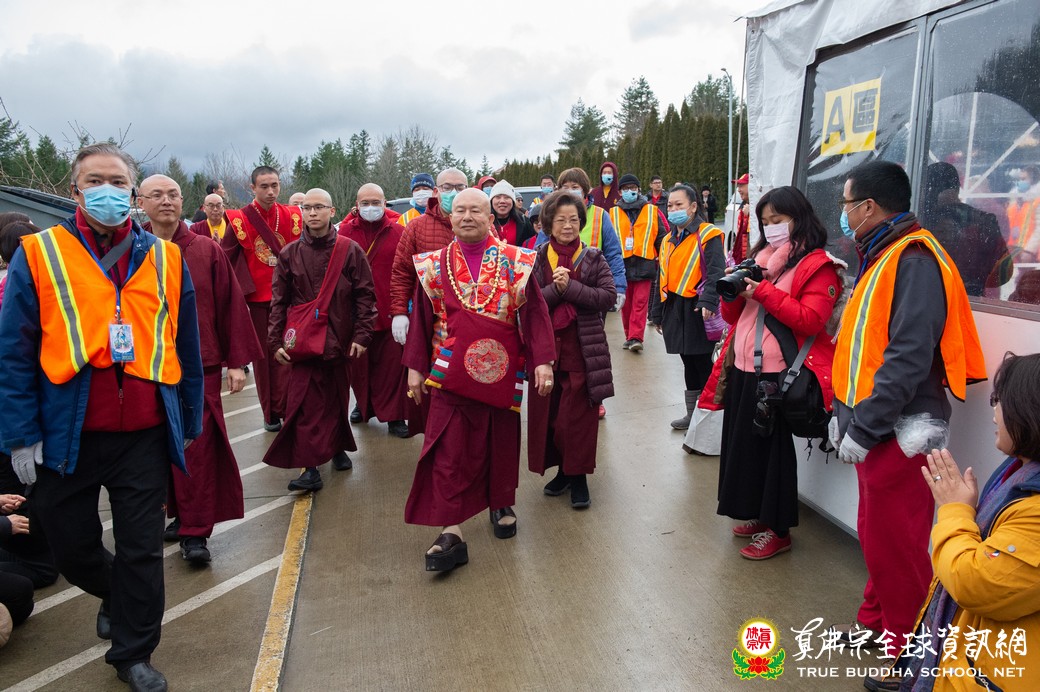 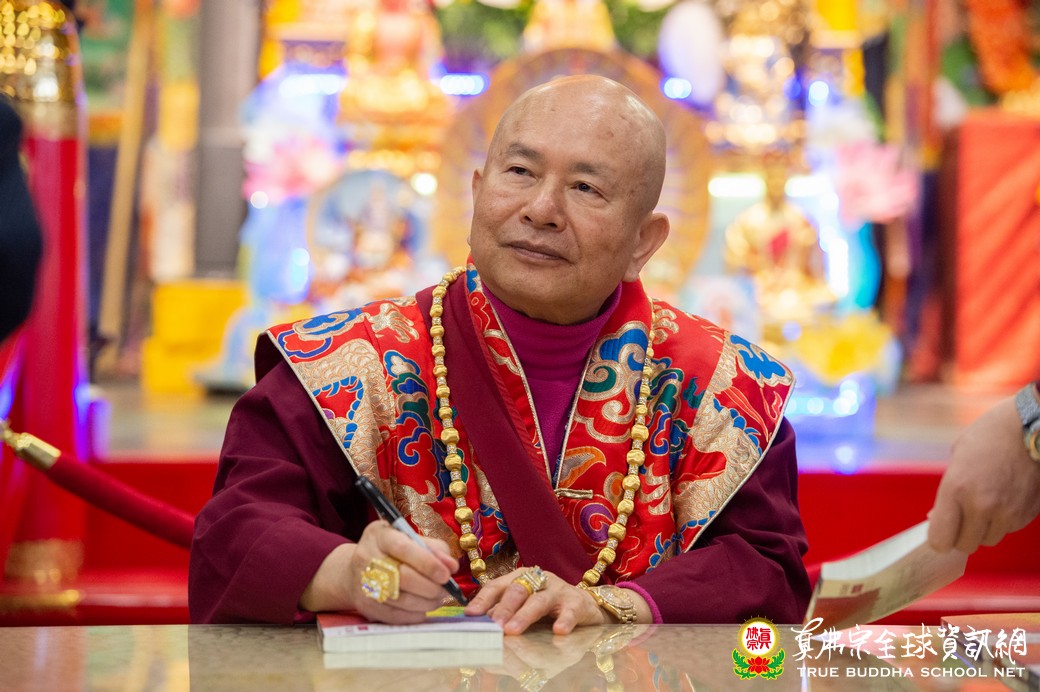 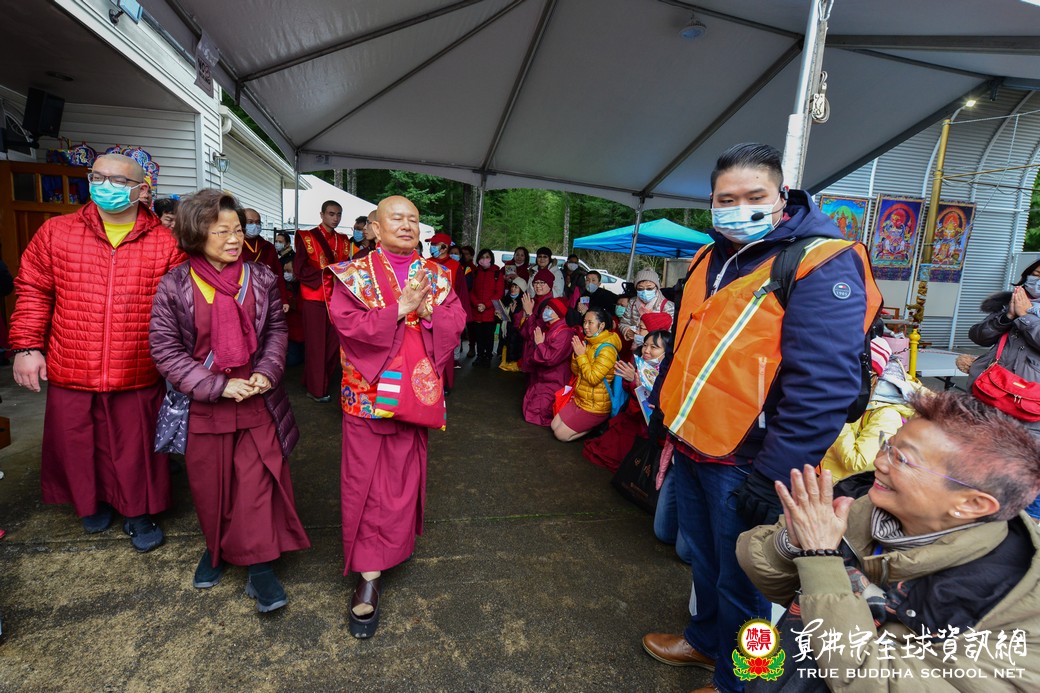 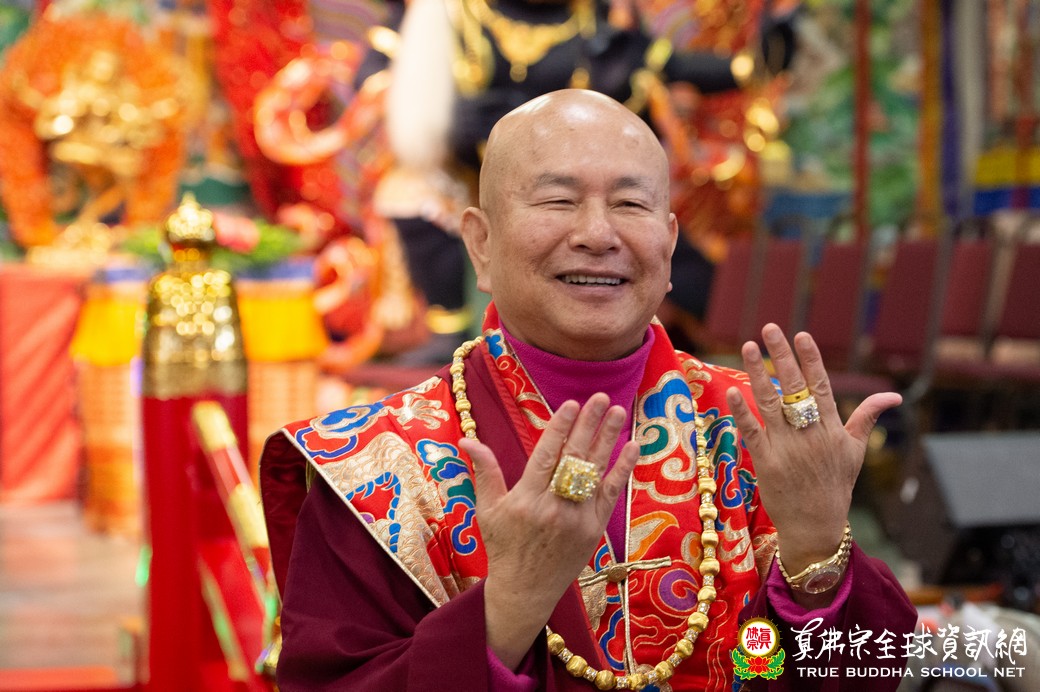 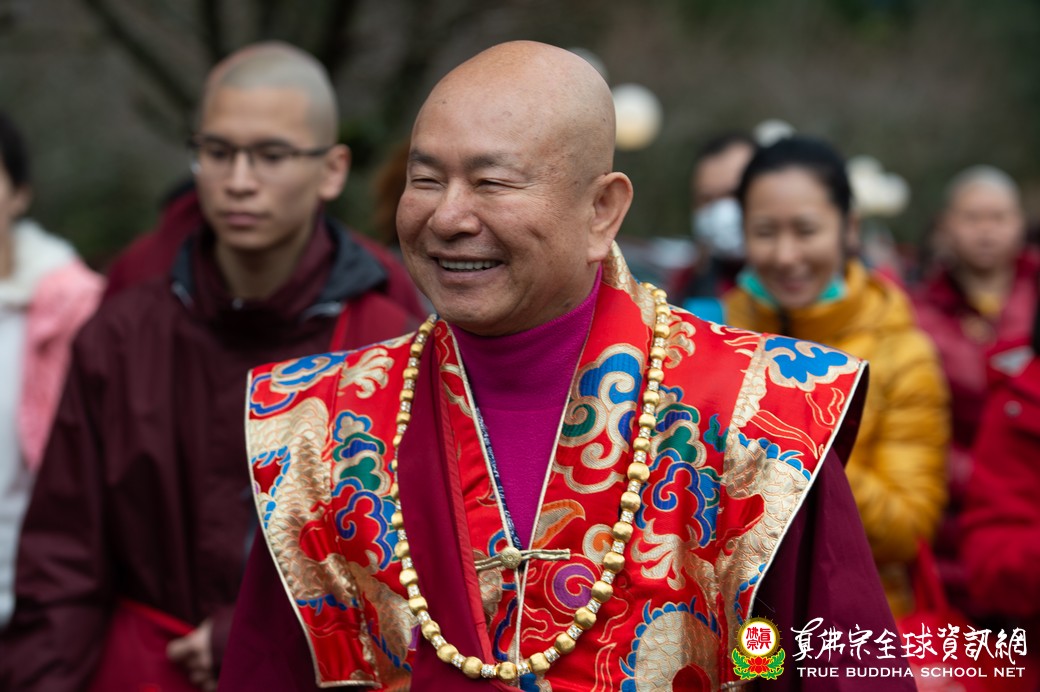 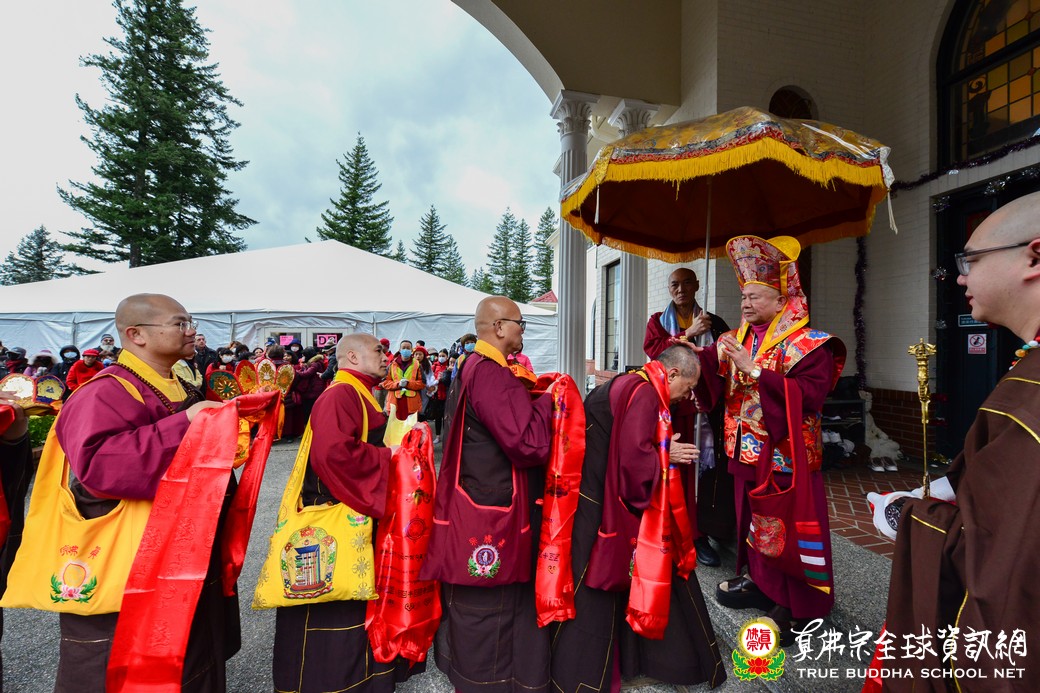 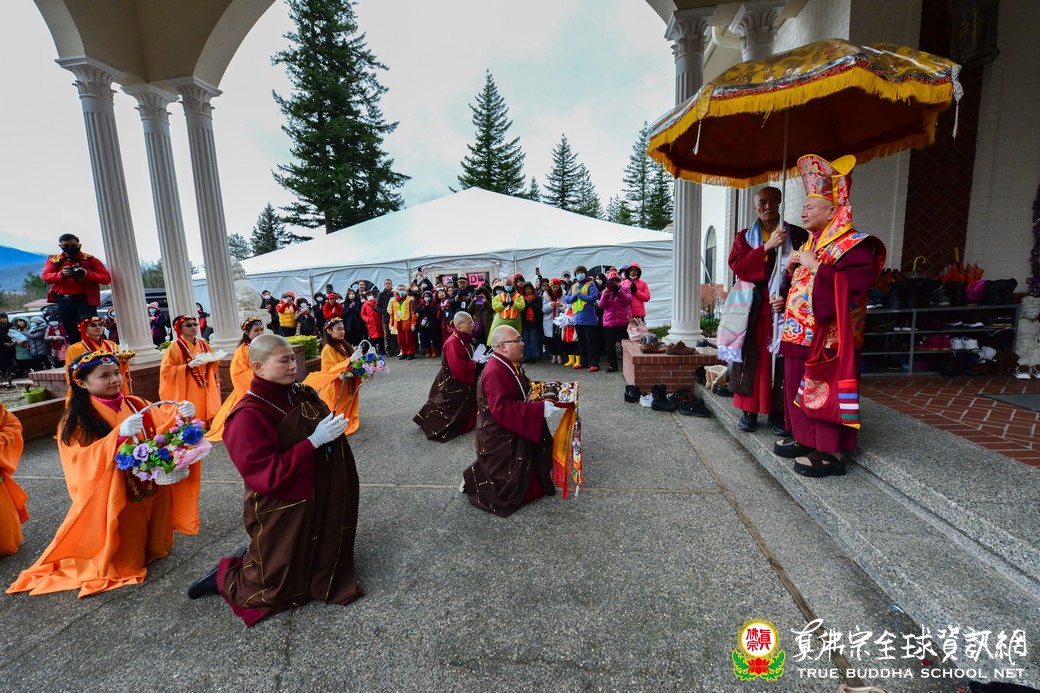 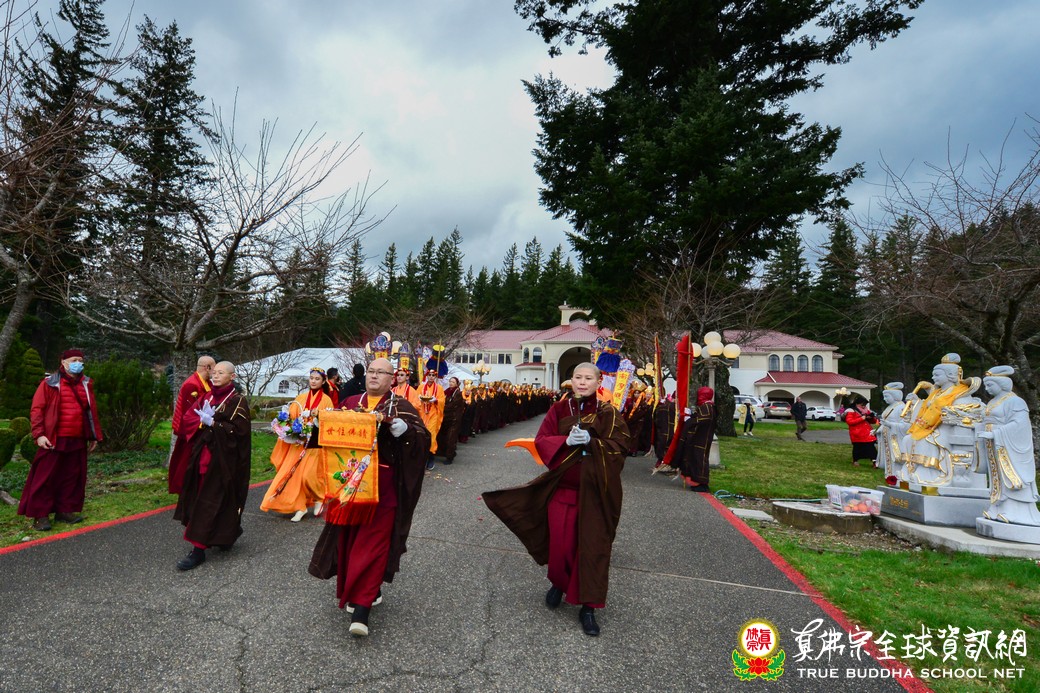 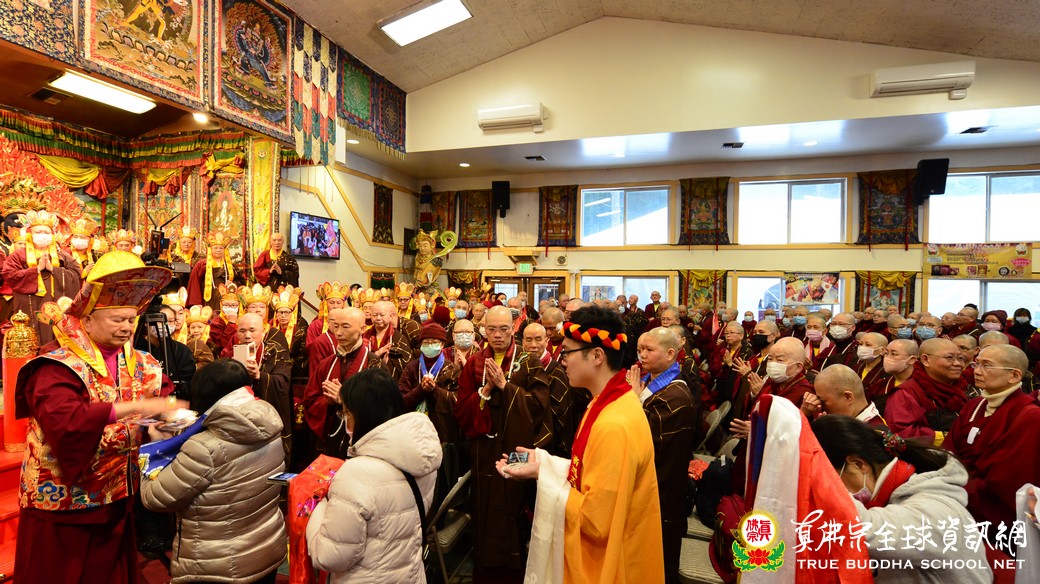 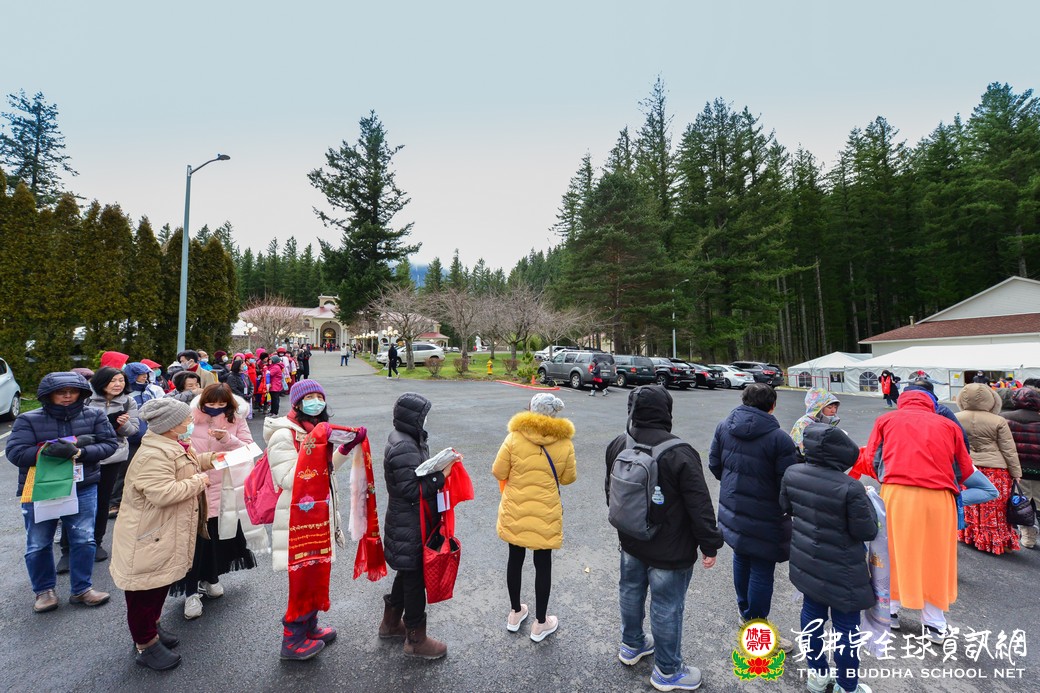 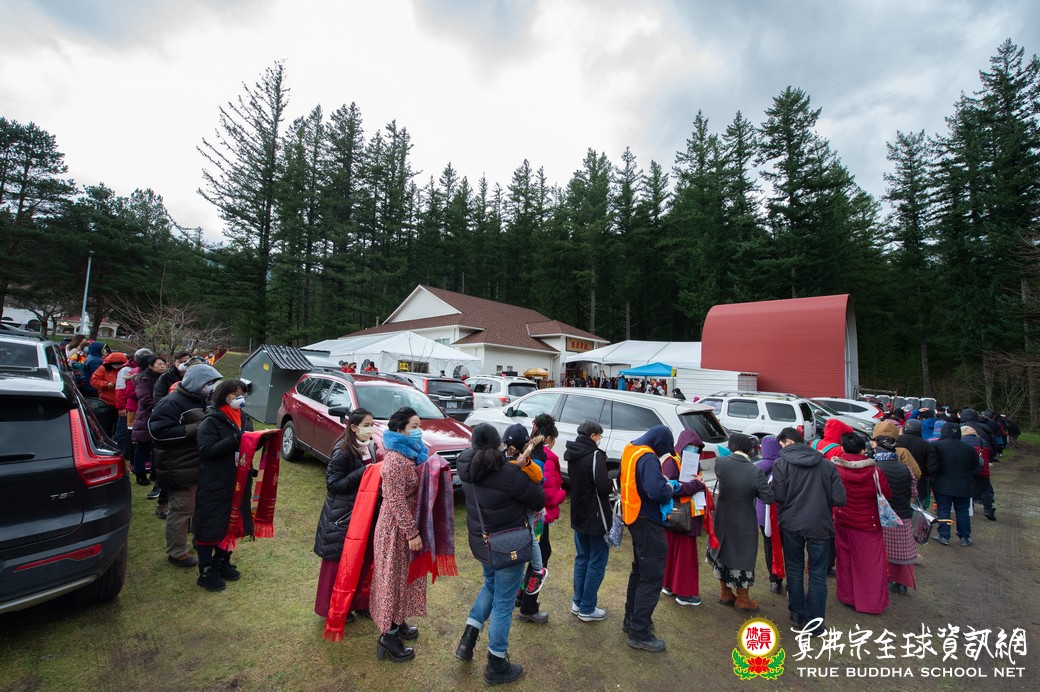 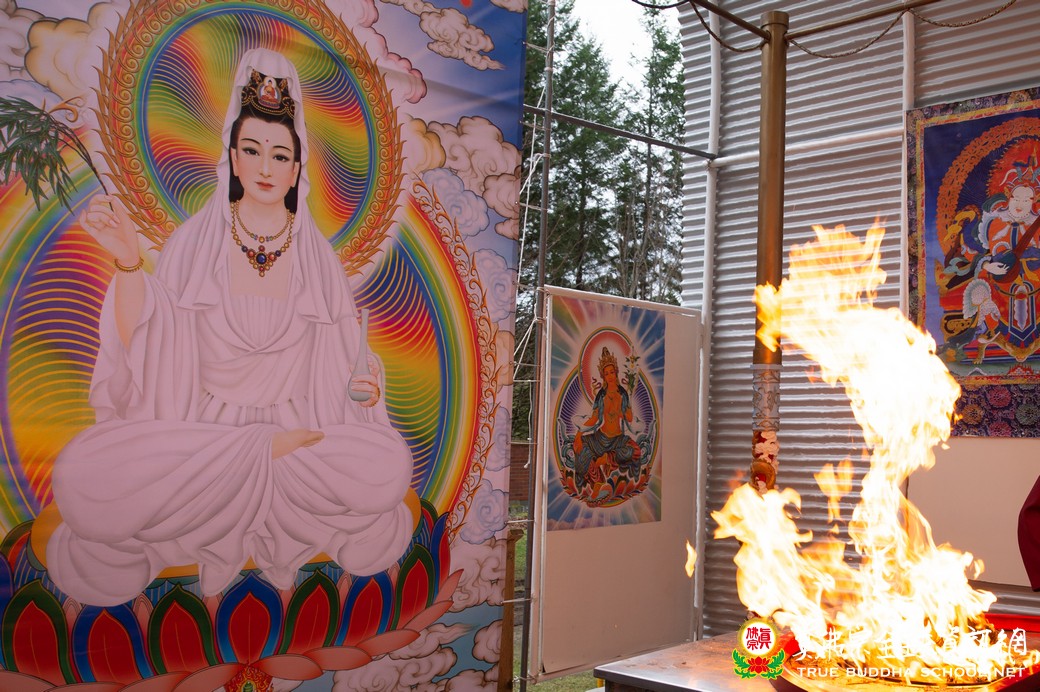 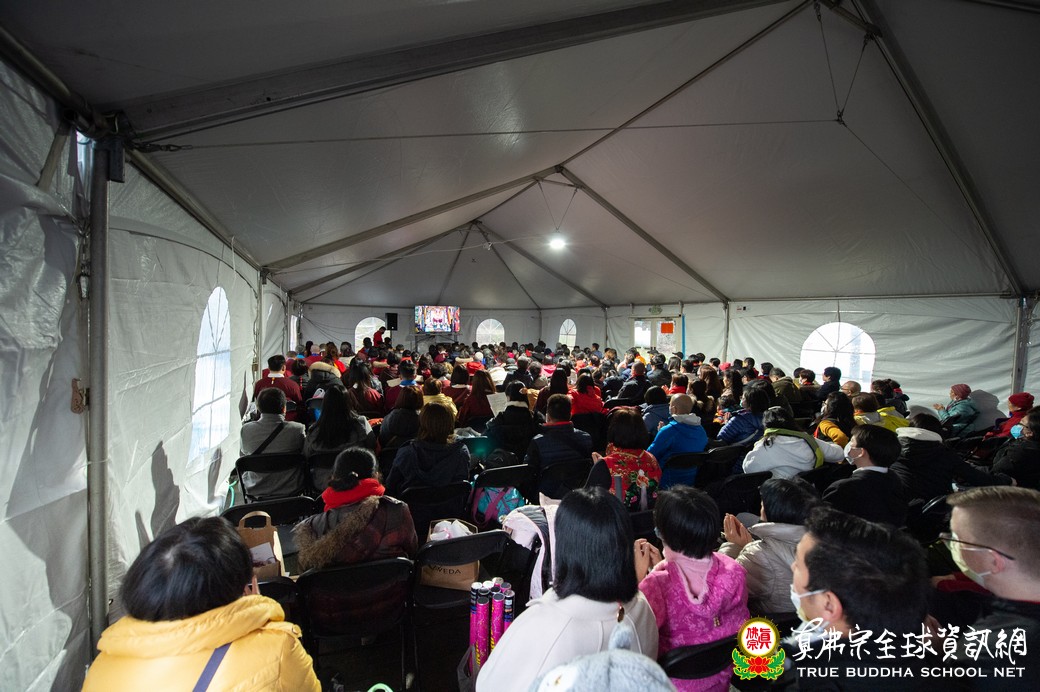 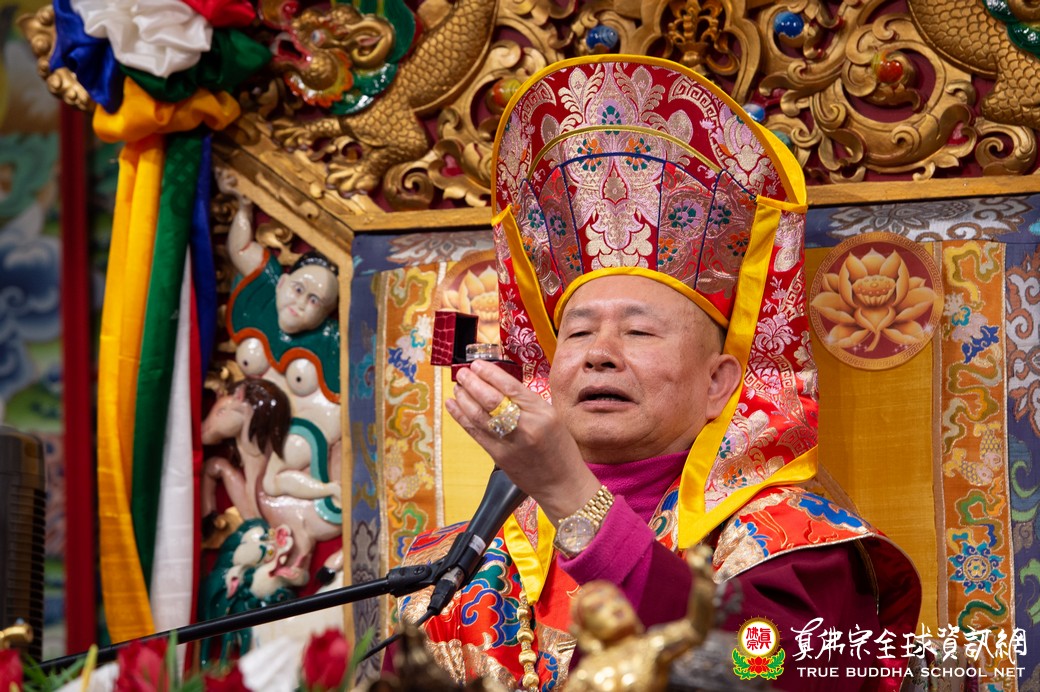 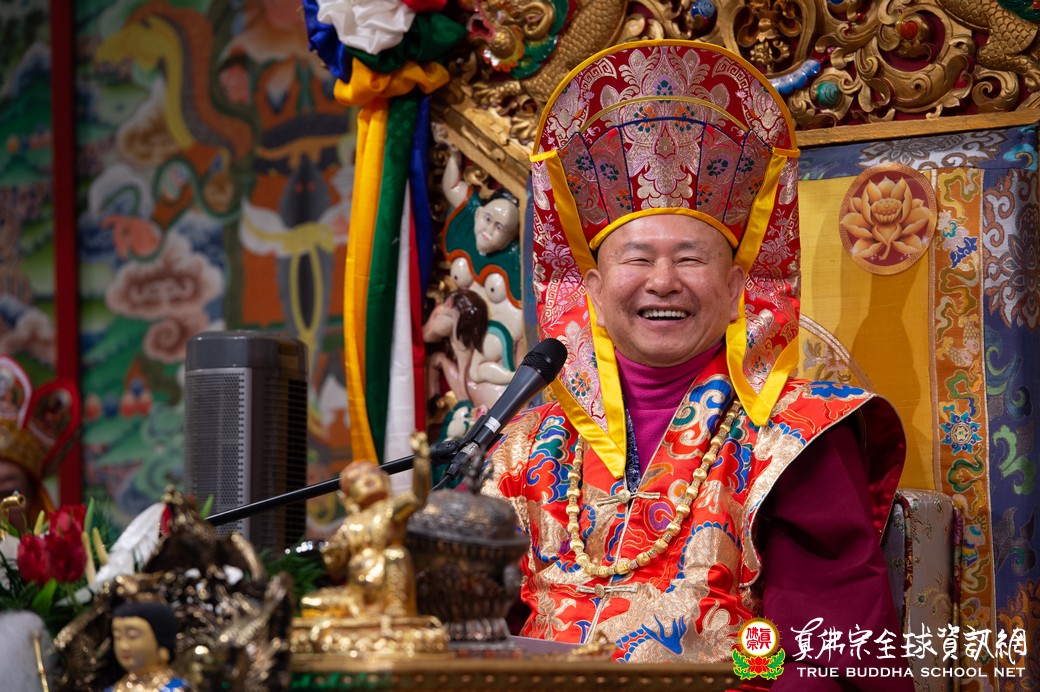 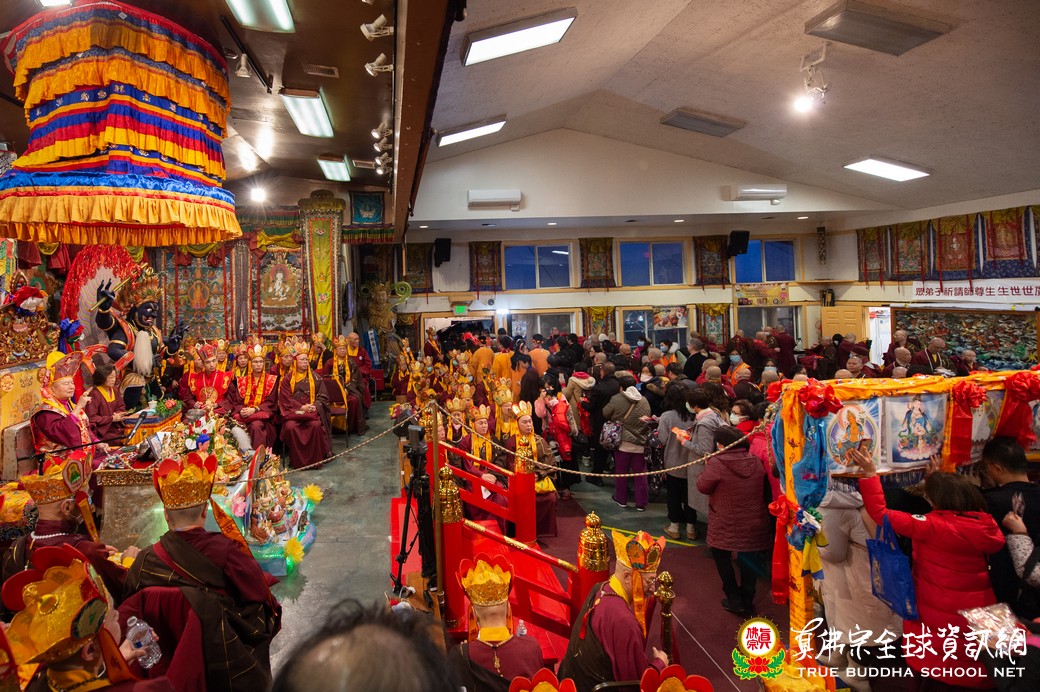 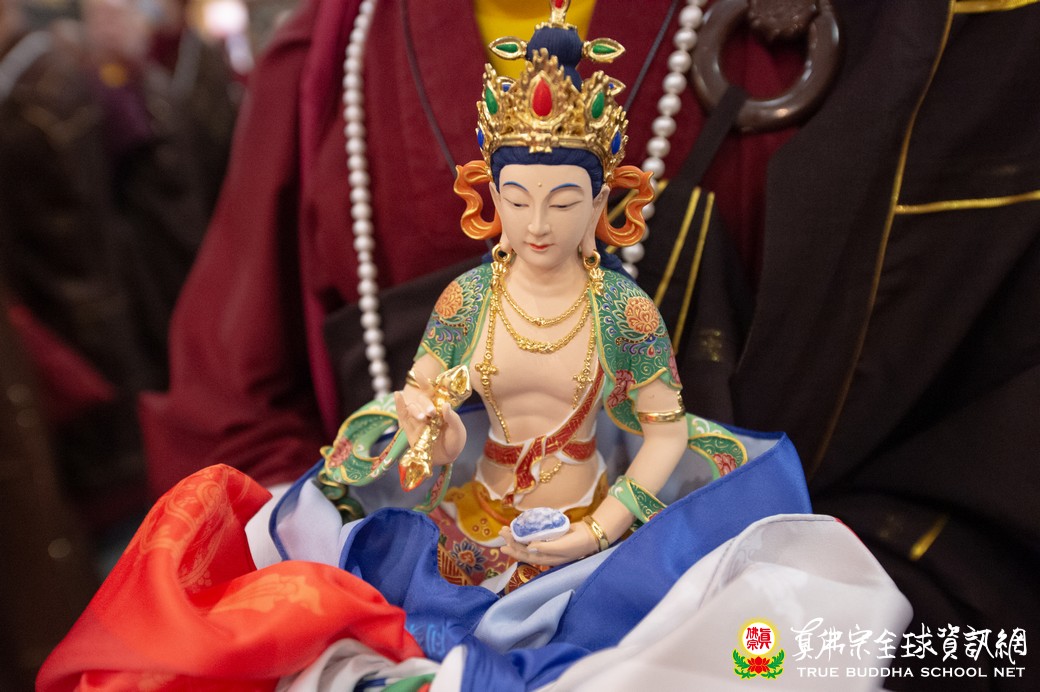 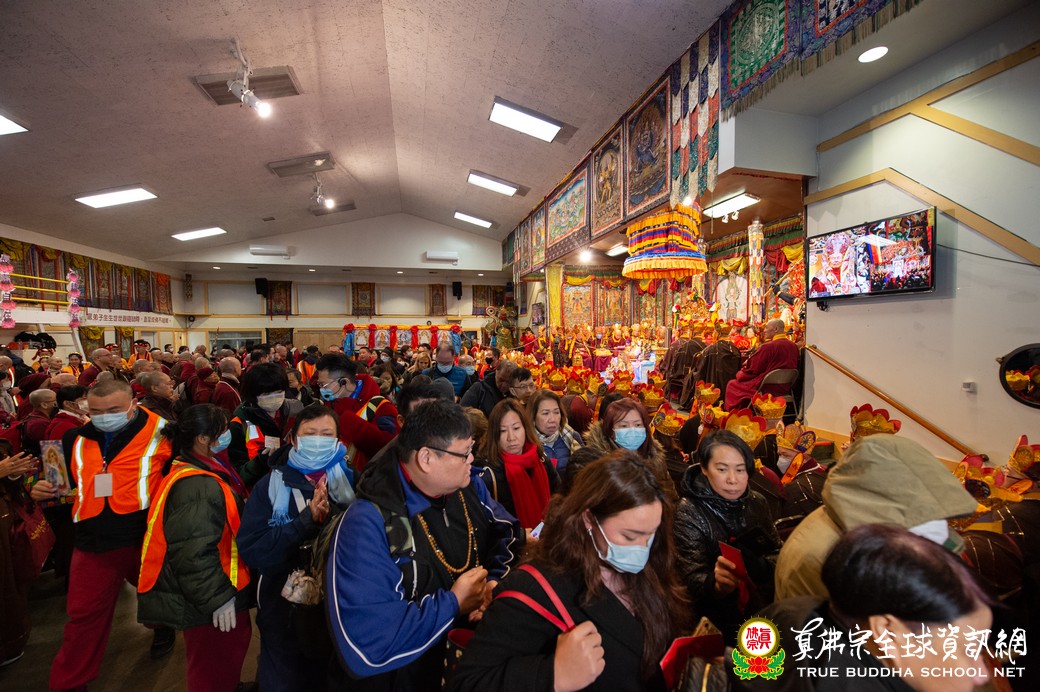 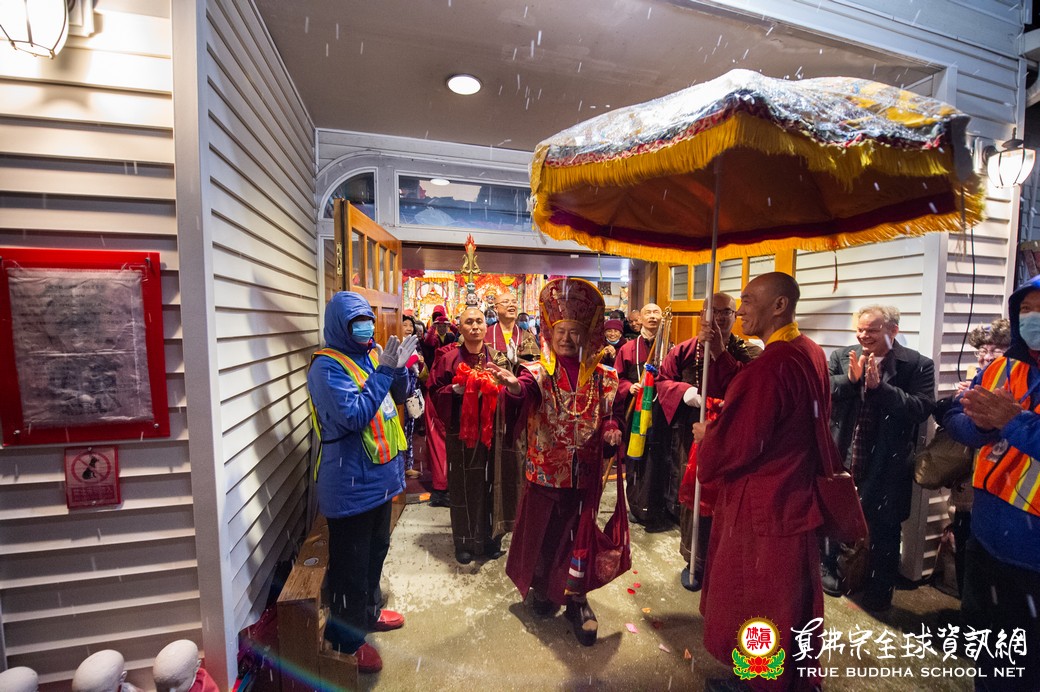 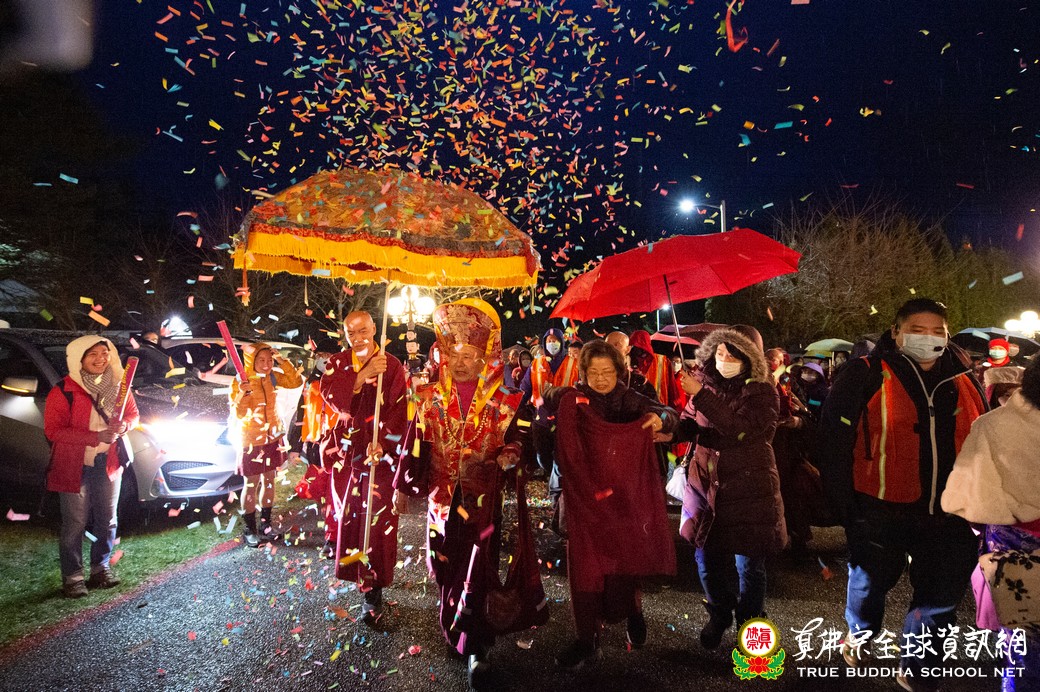 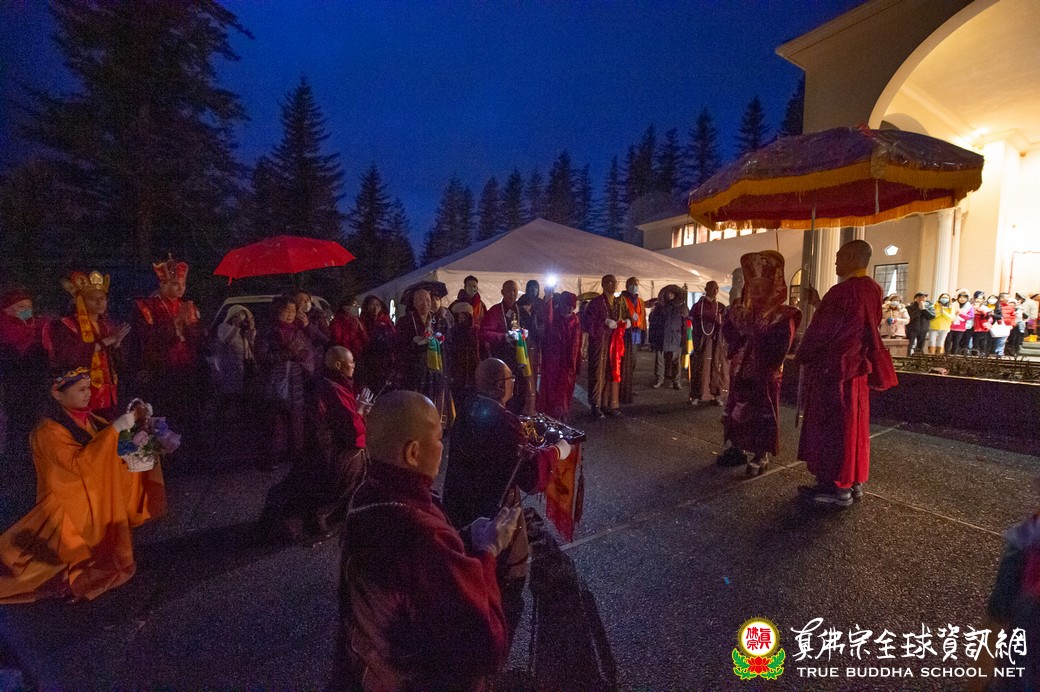