#TBS Report from Seattle Ling Shen Ching Tze Temple
Although the cold winter rain in Seattle was still lingering, Seattle Ling Shen Ching Tze Temple (LSCTT) brought everyone infinite warmth with its charming colorful lantern lights and ribbon balls decorating the temple inside and out for the celebration of the approaching Lunar New Year. The melodious Padmakumara Mantra commenced, filling the quiet night with a solemn hymn. HH Living Buddha Lian-sheng Sheng-yen Lu walked peacefully towards the shrine, leading participants to pay homage to the deities.

Through a joke, Grandmaster discoursed that what is truly useful in studying Buddhism is to attain Buddhahood, not just obtaining a master or doctor degree in Buddhism. Believing everything in books is worse than having no books at all. Attainment resulting from listening to a Dharma teaching and putting the teaching into practice is what counts.
To merely listen to countless teachings but not practice is useless. Therefore, among hearing, contemplation, and cultivation, cultivation is of utmost importance!

Grandmaster then answered disciple questions collected from the Interaction Is Power Event.

If one is self-reliant, that is, if one has sufficient ability of self-deliverance, one can go when one is ready to go. Some are delivered at the end of their lives, some are delivered from the netherworld... etc. When you are in the underworld, can you still recite a buddha name? When King Yama asks who you took refuge in, will you remember to reply that you took refuge in Grandmaster Lu? When King Yama asks if you can chant the Guru Mantra, you answer yes, Om. Guru. Lian-sheng. Siddhi. Hum! Grandmaster will then appear immediately in the underworld and deliver you to the pure land. Recently, in fact, many dakinis brought those spirits to Grandmaster.

Grandmaster further explained: The Earth God Mantra is also very powerful.
The Earth God is the god who guards your house, village, and town. A village has earth gods of the four directions, that is, a village is protected by four earth gods.

Q: At the beginning of practicing Treasure Vase Qi, I was mistakenly taught, resulting in qi entering my uterus. How can I expel the qi?
A: When practicing Treasure Vase Qi, one first visualizes oneself as being empty. One’s body is empty. Pay no attention to where the uterus is. There are no internal organs, nor blood vessels. There is nothing whatsoever. One’s body is merely a shell, that is, a shape containing three channels; a central channel, a left channel, and a right channel. The left and right channels connect to the central channel at the navel chakra, When one inhales and holds the breath, qi will enter the central channel from the left and right channels.

After the Q&A session, Grandmaster continued to discourse Lamdre. The beginning stage of seeing the Tao is the Stage of Rejoicing, namely seeing the Tao. In Sutrayana, there are only ten stages of bodhisattva. When one reaches the 11th stage, one is considered to have attained Buddhahood. In Lamdre, beside the ten stages of bodhisattva, there are also 11th, 12th, and 12 1/2 stages. "25 divisions" means "25 bodhi divisions", which is a detailed description of the bodhi levels. The Five Paths are the Path of Accumulation, the Path of Preparation, the Path of Seeing, The Path of Cultivation, and finally, the Path of No More Learning.

The initial stage to the 6th stage is referred to as the development stage. The 7th to 10th stages are the four stages of practicing self-blessing. This is the teaching whereby one transforms into one’s personal deity. A “mandala wheel” is a mandala that has a round interior and a square exterior. The mandala wheel, namely the prajna light, is the teaching of the 11th and 12th stages. The teaching of the 12 1/2 stage is the Vajra Wave. What is the Vajra Wave? When Grandmaster was discoursing The Great Exposition of Tantras, Tsongkhapa appeared to bless Grandmaster. The light around Tsongkhapa was densely packed. That light was vajra wave light.

Grandmaster used his own cultivation experience as an example. When buddhas and bodhisattvas descended to bless Grandmaster, this was the development stage. When Grandmaster transformed into his personal deity, it was self-blessing. When Grandmaster transformed into a wheel, sitting in the prajna light, this was the mandala wheel . Then when the vajra wave appeared, all the Dharma boats ascended into space, heading towards the Maha Twin Lotus Ponds. That was the vajra wave.

There is also a special meaning in the respective realm. What is the objective of the pure land where saints and ordinary beings dwell together? The objective is to have saints influence ordinary people-if you lie down with dogs, you will get up with fleas. Therefore, if one still has karma, Amitabha Buddha delivers one to the co-dwelling land of the Western Paradise. One sees and learns from the saints, and one’s karma is eradicated. One then enters the pure land of expedient liberation. Later, one enters the higher level of pure land of real reward. At this stage, one is majestic and radiates light. When one enters the land of perpetual quiescent light, one has attained Buddhahood. One has become Amitabha. These all are the objectives.

After the discourse, everyone paid homage to the deities on the shrine. This was followed by Grandmaster blessing the participants. The group practice was auspicious and complete! 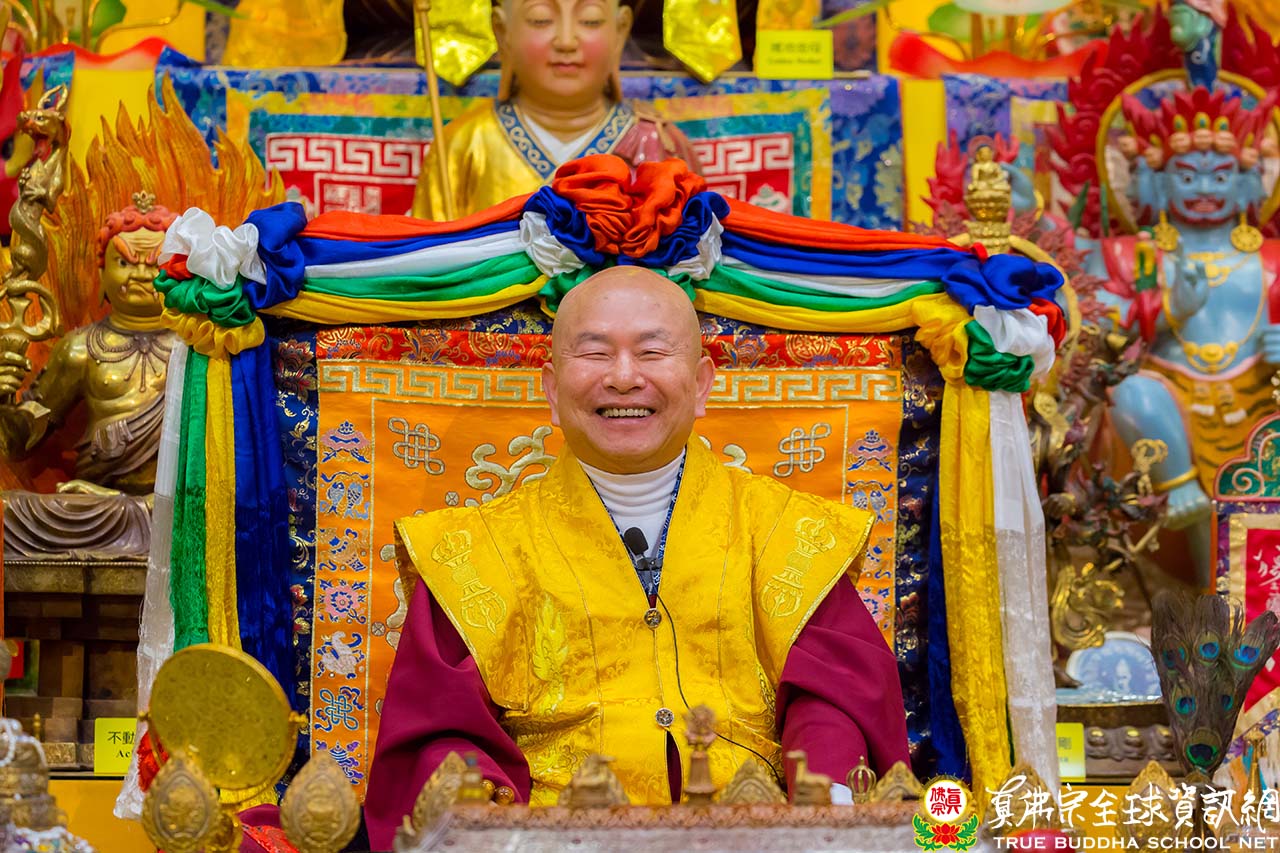 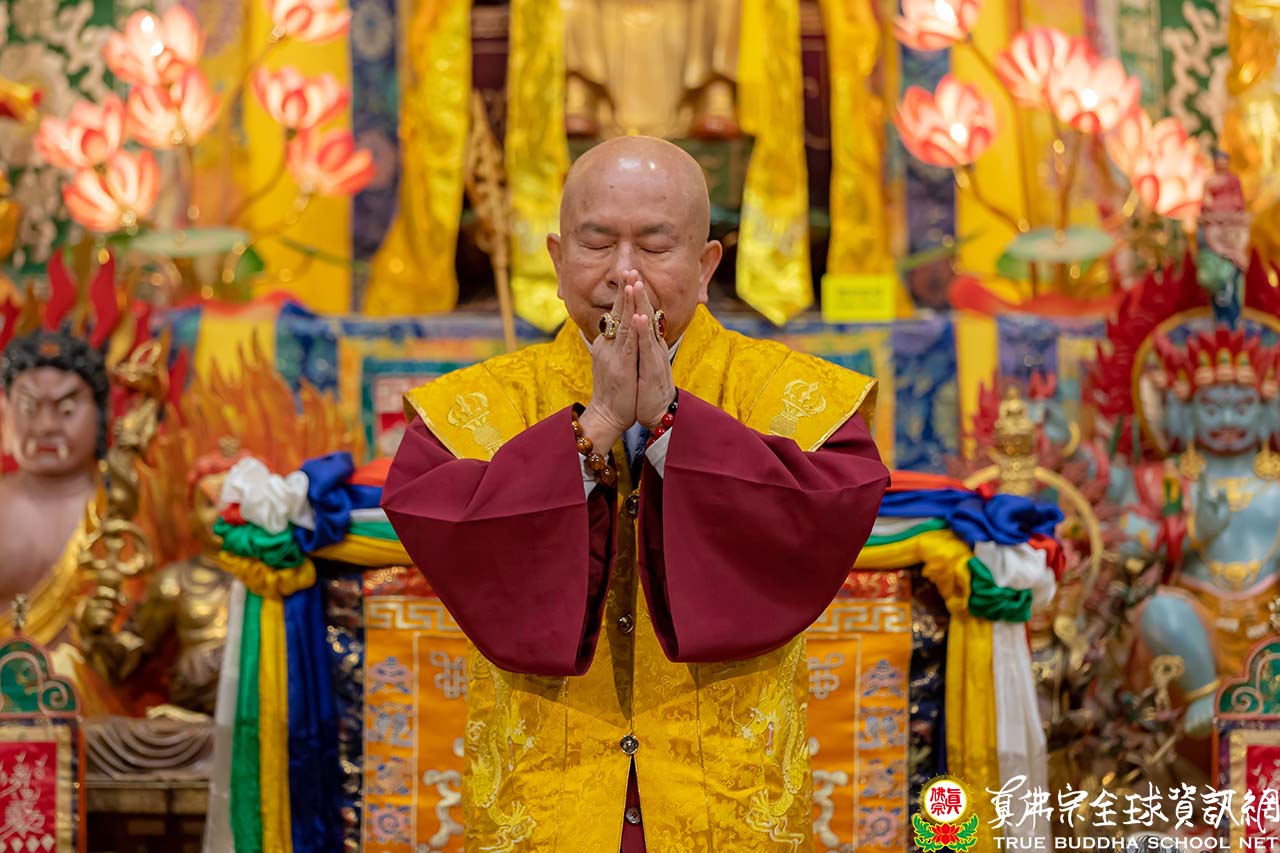 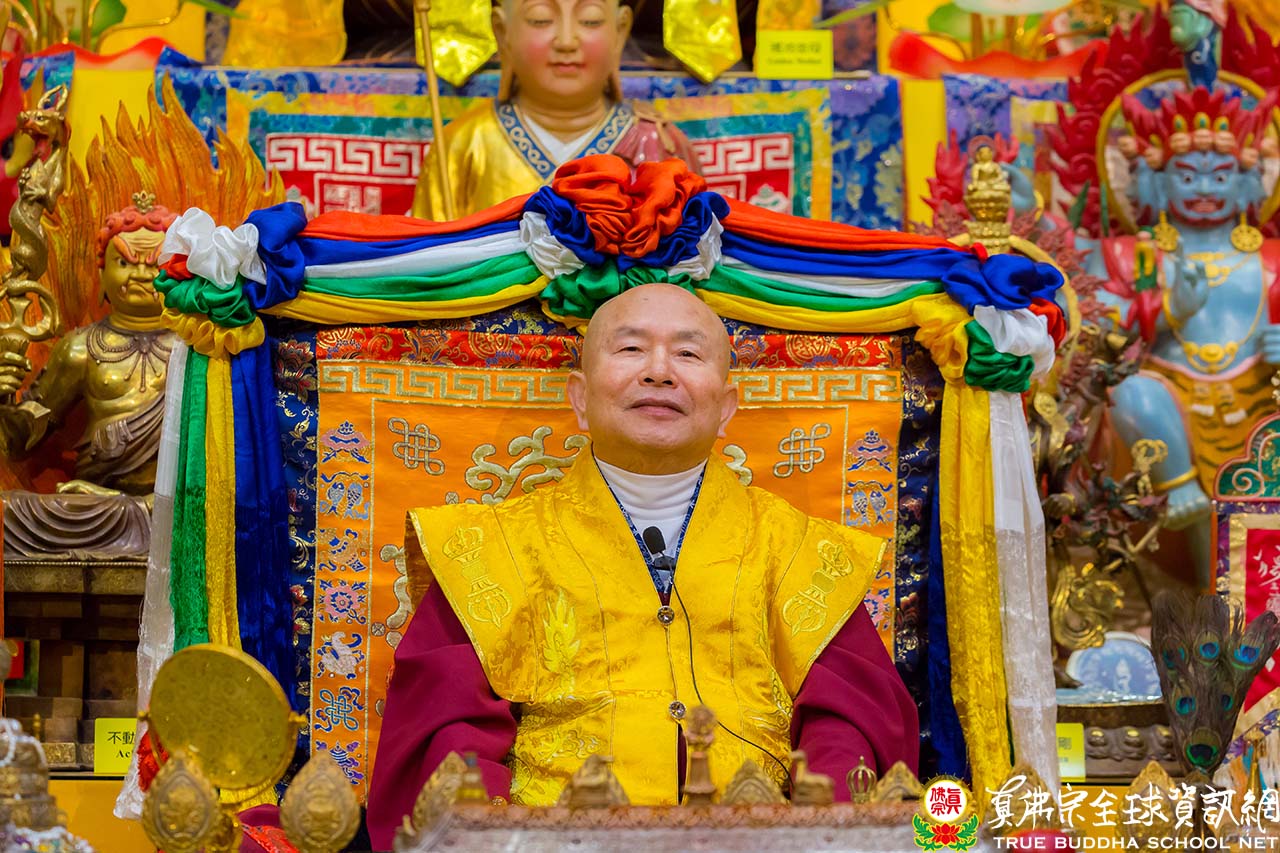 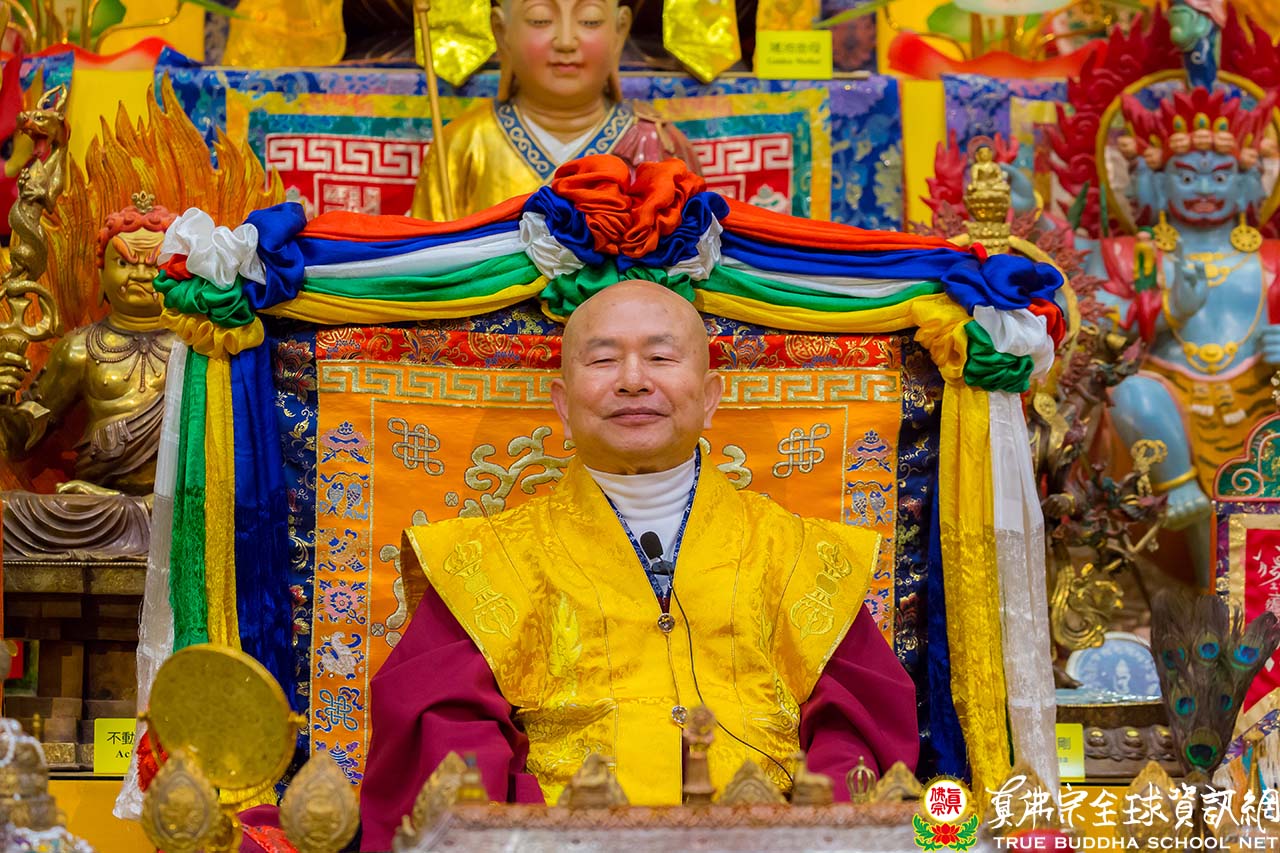 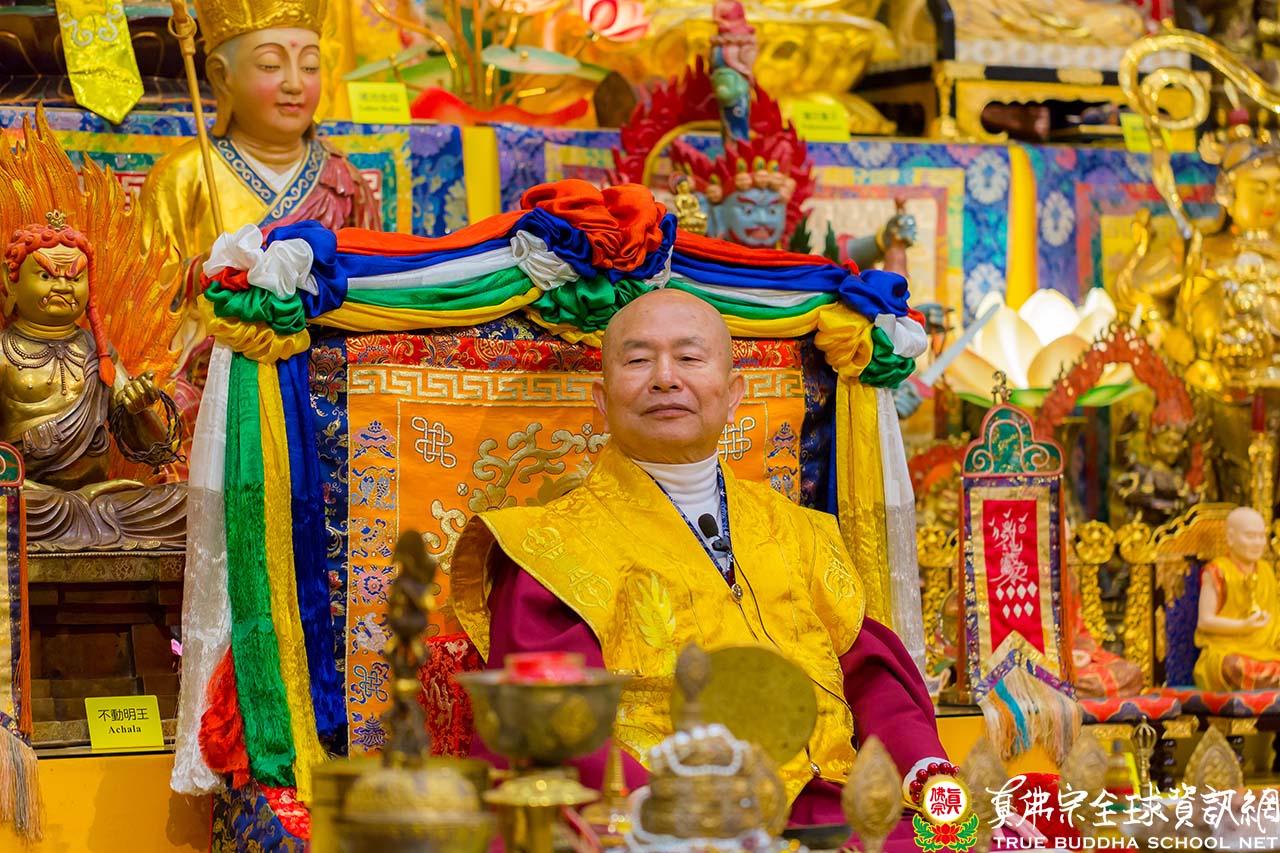 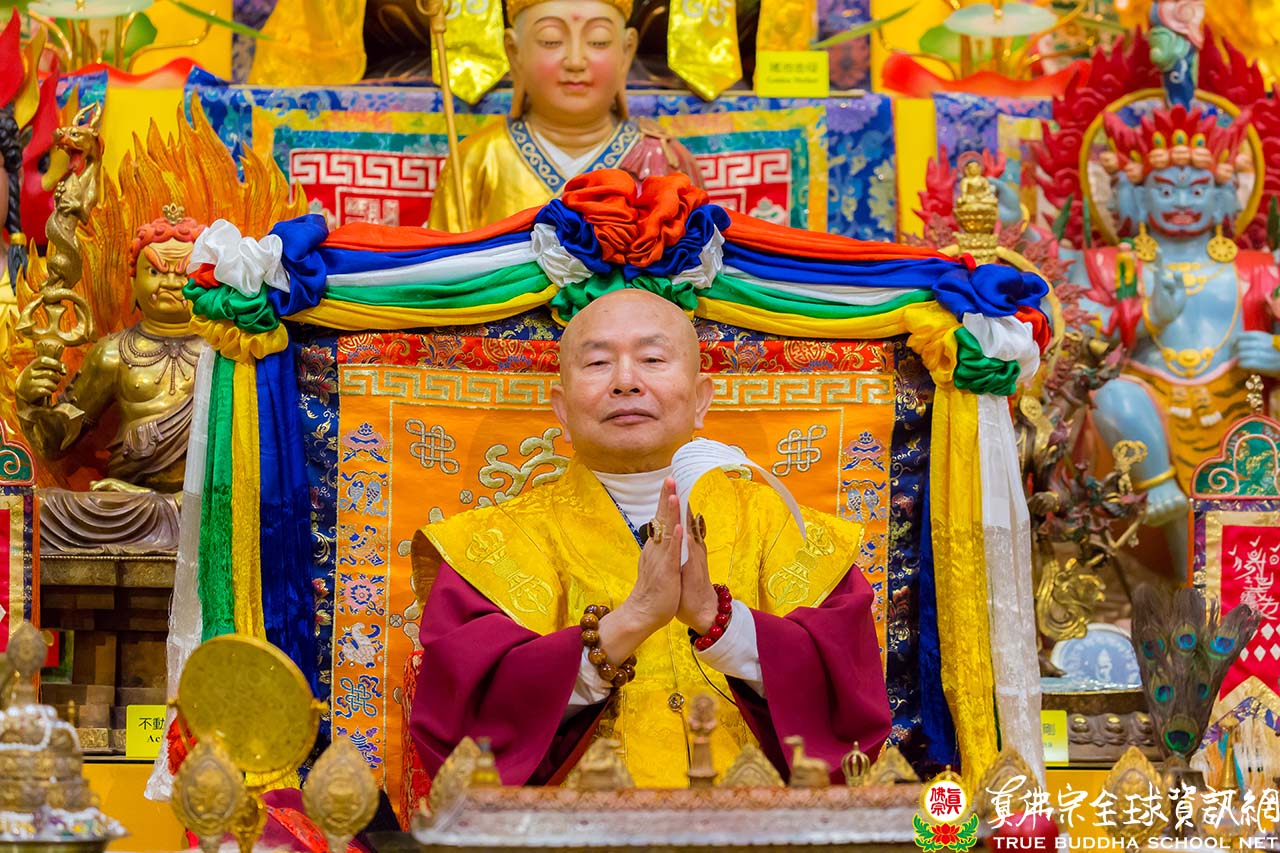 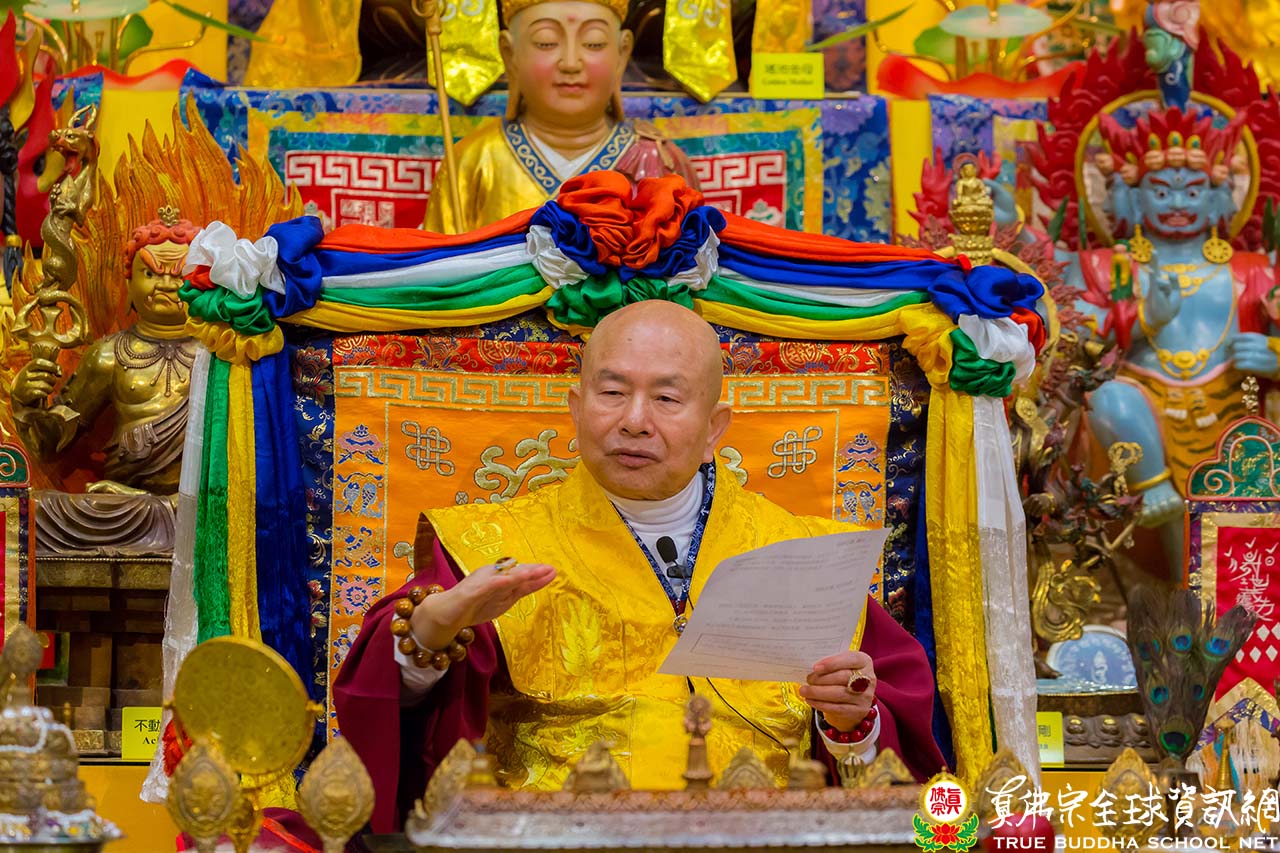 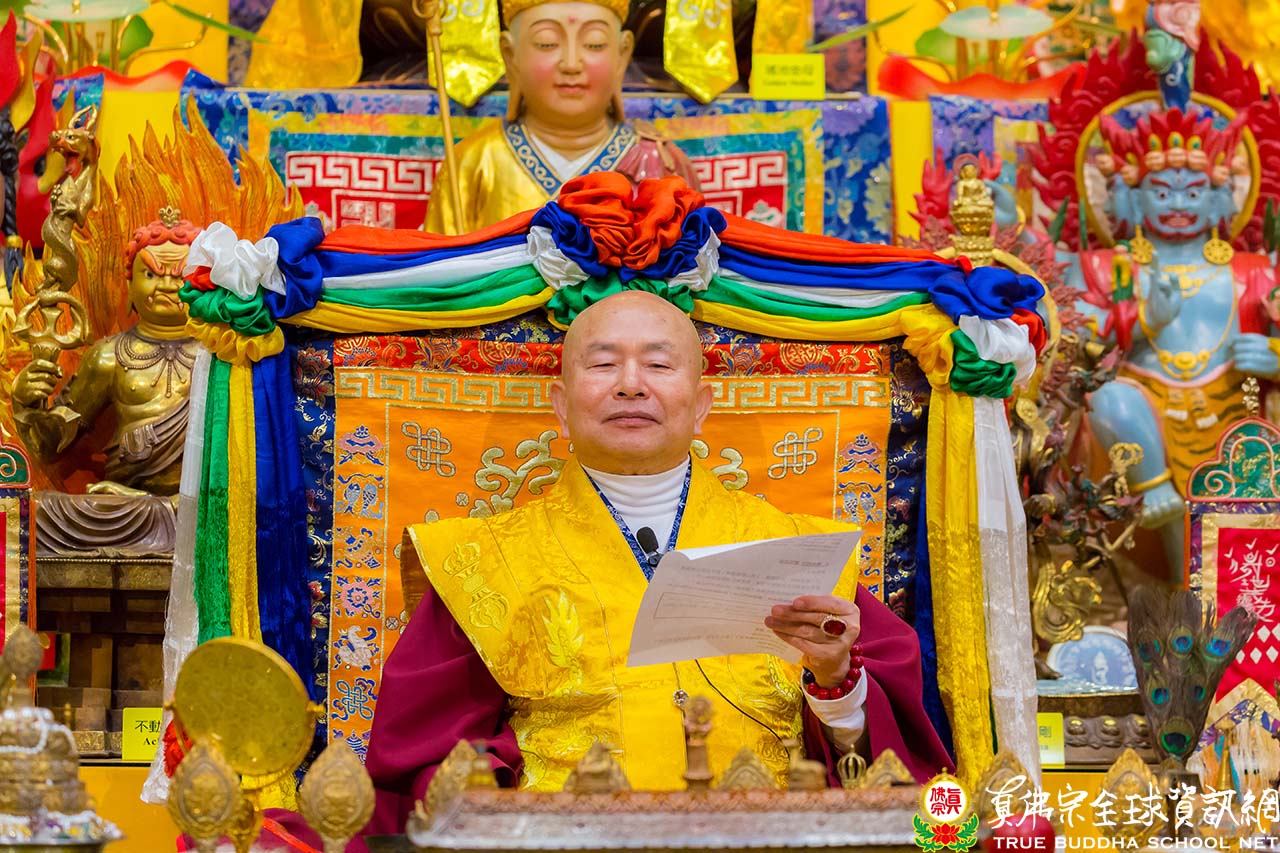 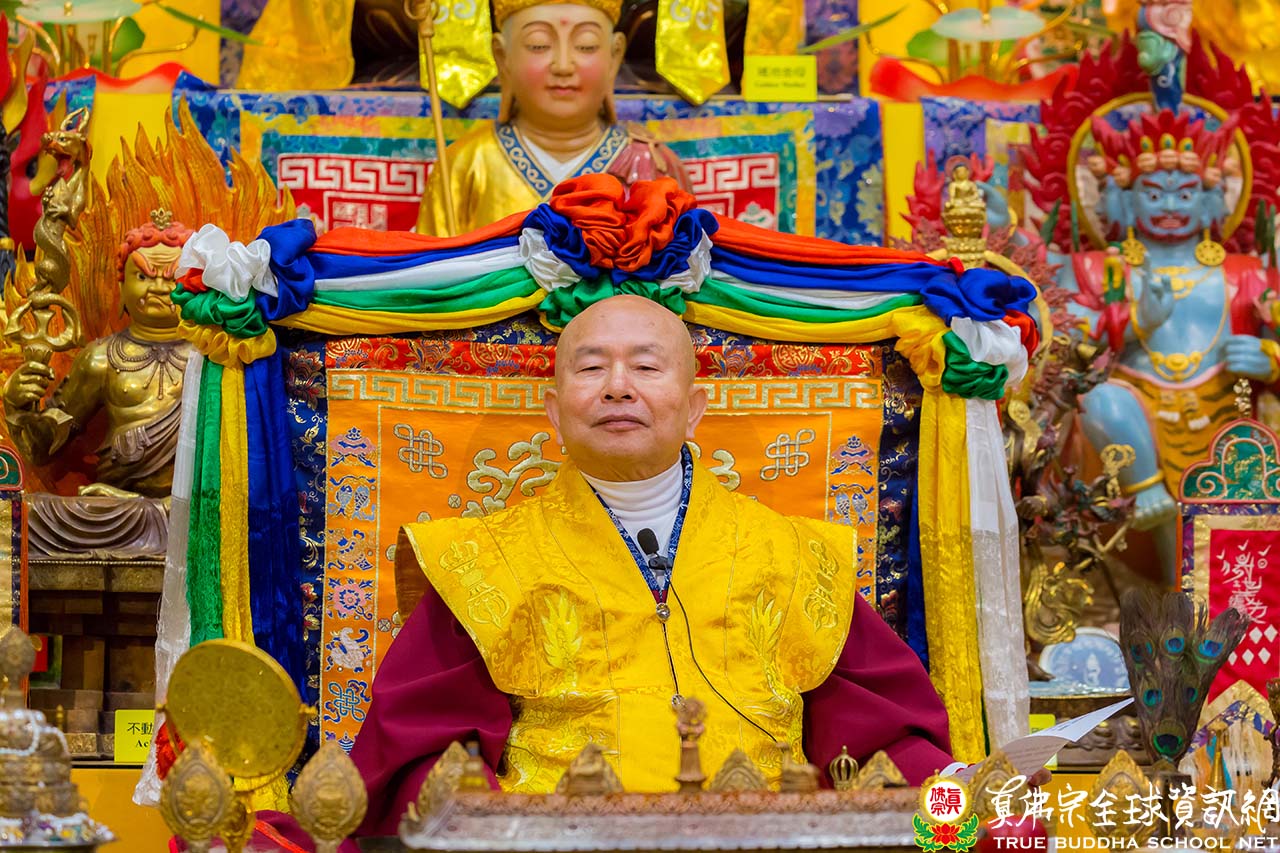 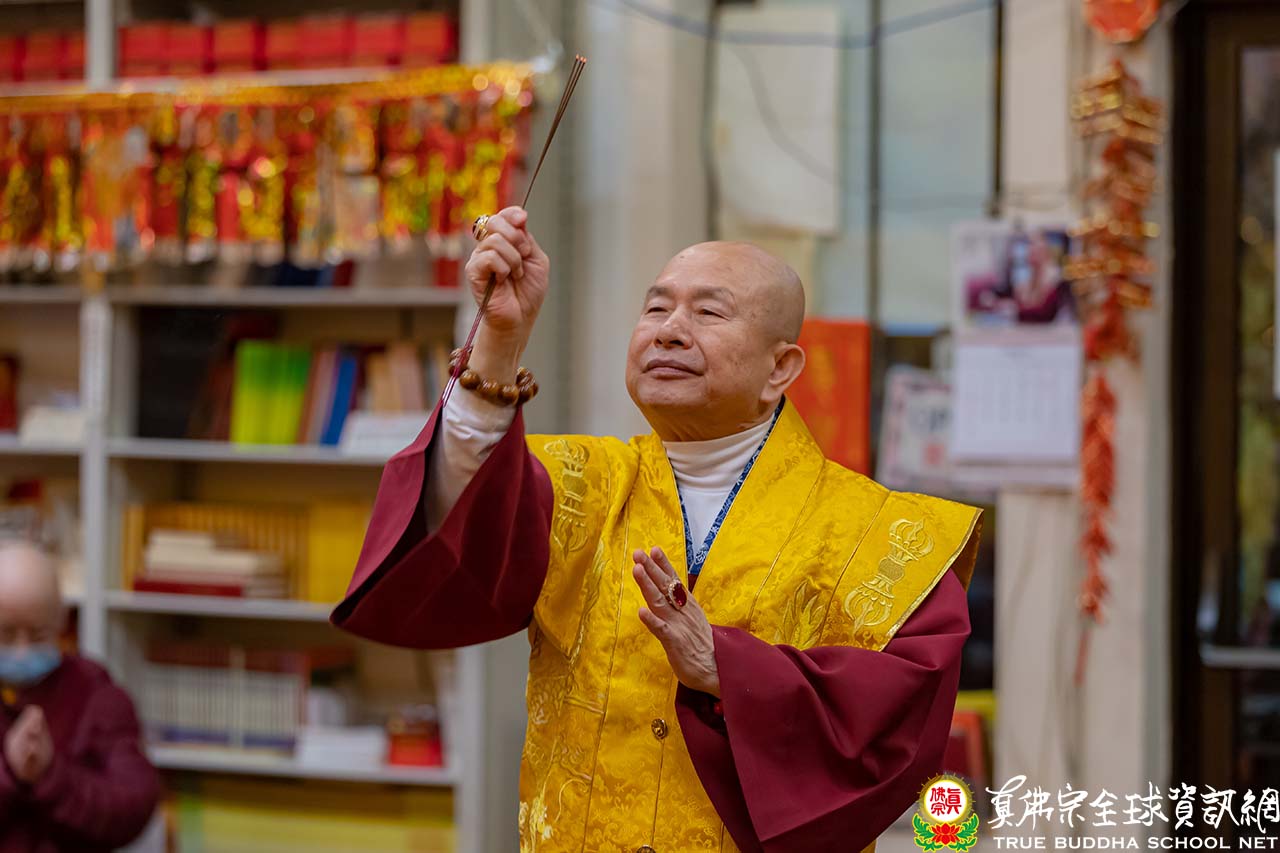 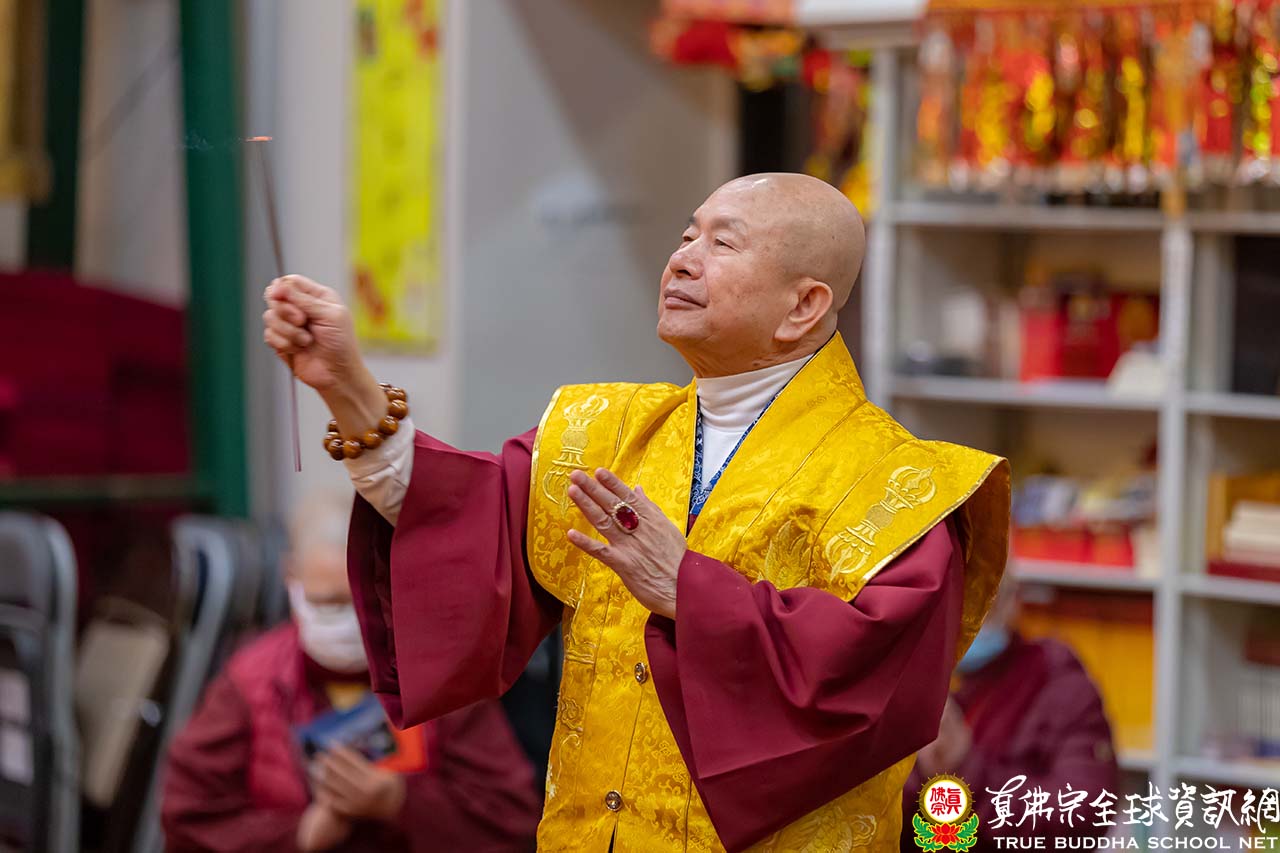 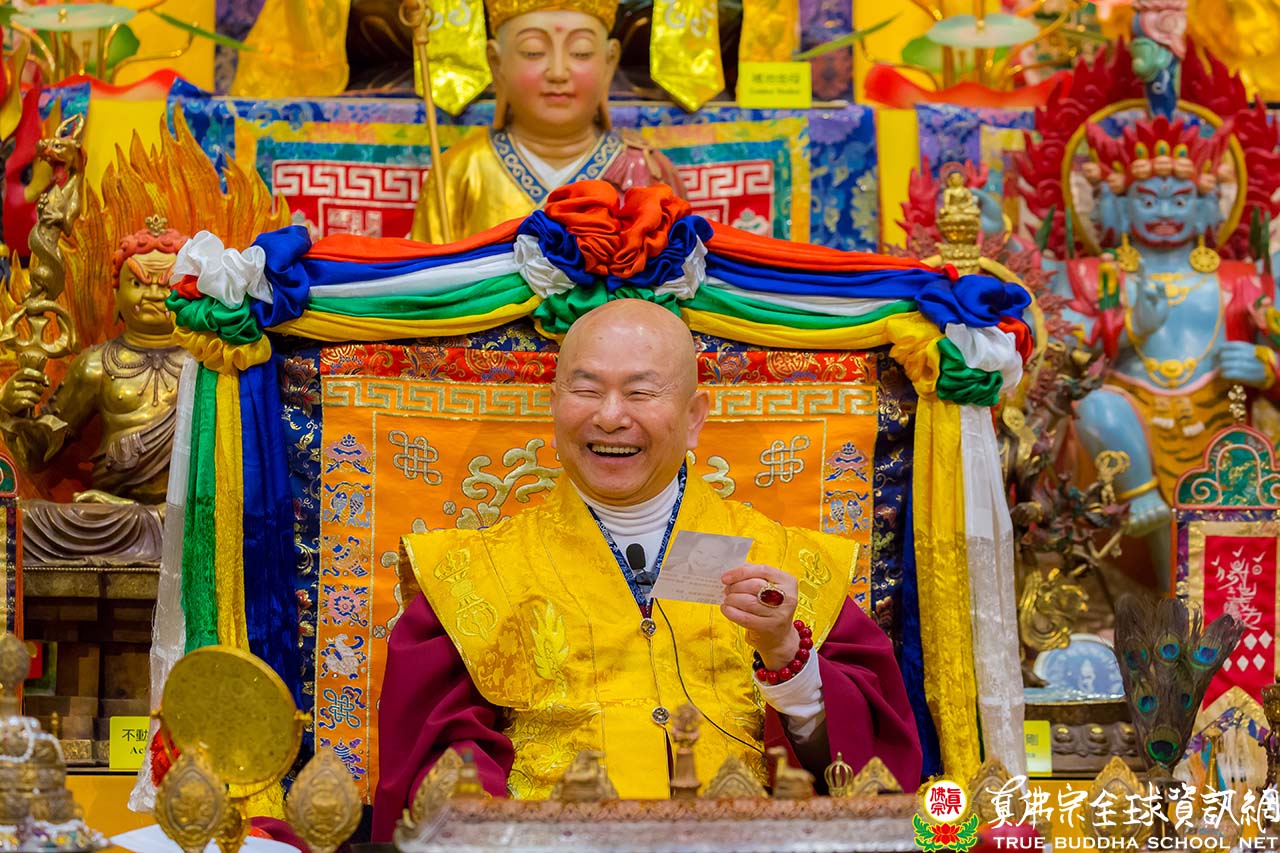 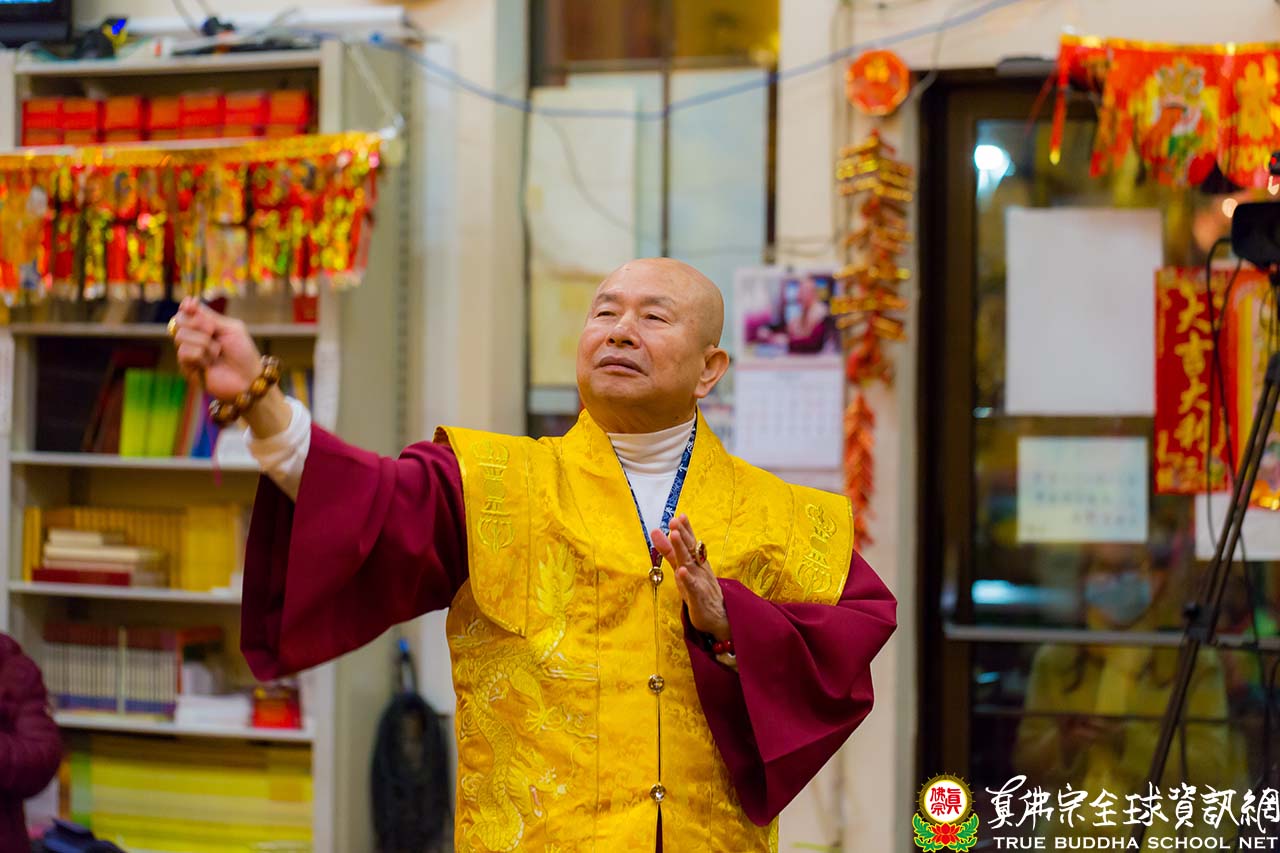 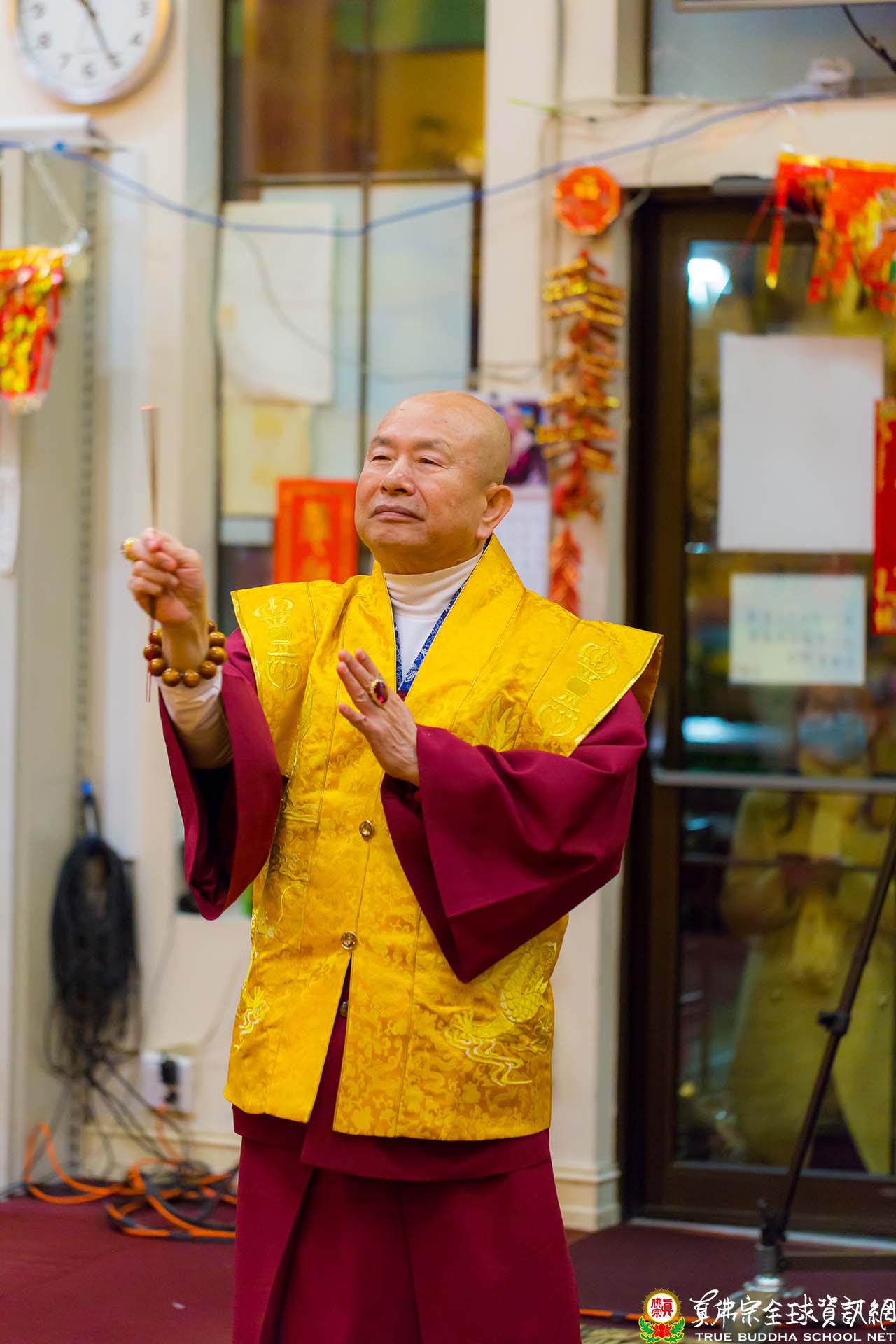