At 8:00 PM on Sept. 12, 2020, Seattle Ling Shen Ching Tze Temple (LSCTT) respectfully invited HH Root Lineage Guru Dharma King Lian-sheng to preside over the annual Fall Amitabha Bardo Deliverance Ceremony. In the past, to accommodate thousands of attendees and devotees, the annual fall ceremony was always held off-site in a large conference hall. The ceremony also transmitted a principal deity, performed marriage blessing ceremonies, and bestowed ordination precepts and lay bodhisattva vows. This year, however, because of the COVID-19 pandemic and to comply with preventive measures mandated by the State of Washington, the fall ceremony was merely held at Seattle LSCTT without any principal deity for transmission. There was neither a marriage ceremony nor any other kind of bestowals as previously mentioned. Disciples and devotees worldwide were only able to participate in the ceremony via a live webcast.

Following the solemn and dignified fall ceremony, in the spirit of upholding Grandmaster’s teachings of seeing another’s drowning as oneself drowning and putting oneself in other’s shoes, Seattle LSCTT was deeply moved by the pain and suffering of sentient beings, and during the grand ceremony, specially made a donation of US$20,000 to the Sheng-yen Lu Foundation. LSCTT hopes this show of support will inspire more donors to dig deep to assist the needy.

Dharma King Lian-sheng discoursed that disasters such as the COVID-19 pandemic, wildfires in the United States, the hurricane in the Caribbean Sea, and the series of floods in China, all highlight the impermanence of this world. The Buddha’s teachings of all phenomena being impermanent and no existence being eternal are the truth. Only upon reaching the pure land by cultivating diligently will we abide in true eternity.

During the deliverance, Amitabha Buddha used three methods to deliver sentient beings to the pure land. The first method was deliverance by light. Amitabha Buddha radiated brilliant light into the dark, deep, and gloomy hell regions. Upon seeing this light, the netherworld beings moved in that direction. Amitabha Buddha then delivered them with the light.

Amitabha’s second method was deliverance with Dharma boats. In this deliverance, each time Grandmaster released his hand, a Dharma boat glided down from his hand. One Dharma boat transformed into 10 boats, 10 boats became 100 boats, and 100 boats became 1,000 boats. Amitabha used the Ten Powers of the Tathagata while Jade Pond Golden Mother used her tremendous spiritual powers to jointly rally the netherworld beings aboard the Dharma boats to be ferried to the Western Pure Land of Ultimate Bliss.

Amitabha’s third method of deliverance was by a lotus. The Pure Land Trinity appeared and released lotus flowers from their hands to deliver tens of thousands of netherworld beings to the pure land.

Of the three methods, the highest deliverance is by lotus; the middle, by Dharma boat; and the lowest, by light. Upon rebirth in the pure land, are there any worries about attaining Buddhahood? Once in Amitabha’s Pure Land, one will never recede on the path. By practicing diligently, one will attain Buddhahood and abide in the Realm of Eternally Quiescent Light. One will become a buddha or a bodhisattva. This is the true attainment of eternity.

The Buddha taught that to reach accomplishment, a practitioner must be free of jealousy, resentment and hatred. If one’s heart is as broad and vast as the heavens, one can reach the heavenly realms, whether the Formless Realm, the Form Realm, or the Desire Realm. Those who are narrow, mean, and stingy cannot even be born in the celestial realms, much less the Western Pure Land. One who is evil, narrow-minded, mean, vicious, and contentious will have attainment as an Asura and will sooner or later create bad karma and descend to the three evil paths.

Milarepa was one of the four famous poets in Tibet. He was well known for his spiritually inspiring songs. He was a distinguished Buddhist who eventually forgave his relatives for stealing his inheritance and also forgave everyone else as well. In his biography, there are many poetic songs. The biography describes his cultivation path, from impermanence to suffering, emptiness realization, complete detachment, witness of buddha’s mind with his mind, and the merging of his mind with that of the Tathagata.

Another famous poet was Sakya Pandita, an eminent practitioner of the Sakya School of Tibetan Buddhism. His poetry collection, titled Sakya Lekshe, teaches cultivation of body and the essence of cultivation.

The fourth famous poet in Tibetan history is the 6th Dalai Lama, Tsangyang Gyatso. His remarkable collection of songs and poems is easy to understand. In his poetry, he expresses his desire for both love and Buddhahood. When visualizing his guru, his lover appeared in the visualization. When secretly meeting up with his lover, he was worried this would obstruct his attainment of Buddhahood. He composed many poems about romantic love and attainment of Buddhahood. Later, he ended in tragedy.

The question is -- can one engage in a romantic relationship and practice spiritual cultivation at the same time? In Vajrayana, this is doable. While in love, one is still capable of visualization, reciting mantras, reciting sutras, reciting the Buddha’s name, attaining the Dharma body, and seeing the buddhas and bodhisattvas radiating light to bless one. Are you up for the challenge? This is an extreme test. There is spirit and there is flesh. Flesh must be transformed into spirit through cultivation. If one fails in the consort practice, one descends to vajra hell.

Although everyone is different and unique, their Buddha-nature is the same. To realize the Buddha-nature, one must love all sentient beings, and this includes enemies as well. This is also the teaching of Jesus. The Buddha taught us to practice immeasurable equanimity. That is why, while on the bodhisattva path, the Buddha sacrificed his body to feed a tiger and cut off his flesh to feed an eagle. To be a bodhisattva, one must be tolerant and forgiving of fellow disciples. If someone has made a mistake, we should encourage them to repent and turn over a new leaf. We must never abandon any sentient being.

Grandmaster is generous and big-hearted. However, when the time comes to be strict, he is strict. His disciples must still observe the precepts. One must examine oneself. Disciples who have violated precepts must repent, and those who sincerely repent will be pardoned. Those disciples who violate precepts over and over again, betray and shame their school and guru, or commit any of the five unpardonable sins, will be expelled from the True Buddha School.

Following his brilliant and unsurpassed Dharma discourse, Grandmaster bestowed the blessing empowerment of Amitabha Buddha to the attendees and devotees. Everyone managed to comply fully with the COVID-19 preventive measures and also experienced Dharma joy together, bringing this year’s Fall Ceremony to a perfect and auspicious conclusion. 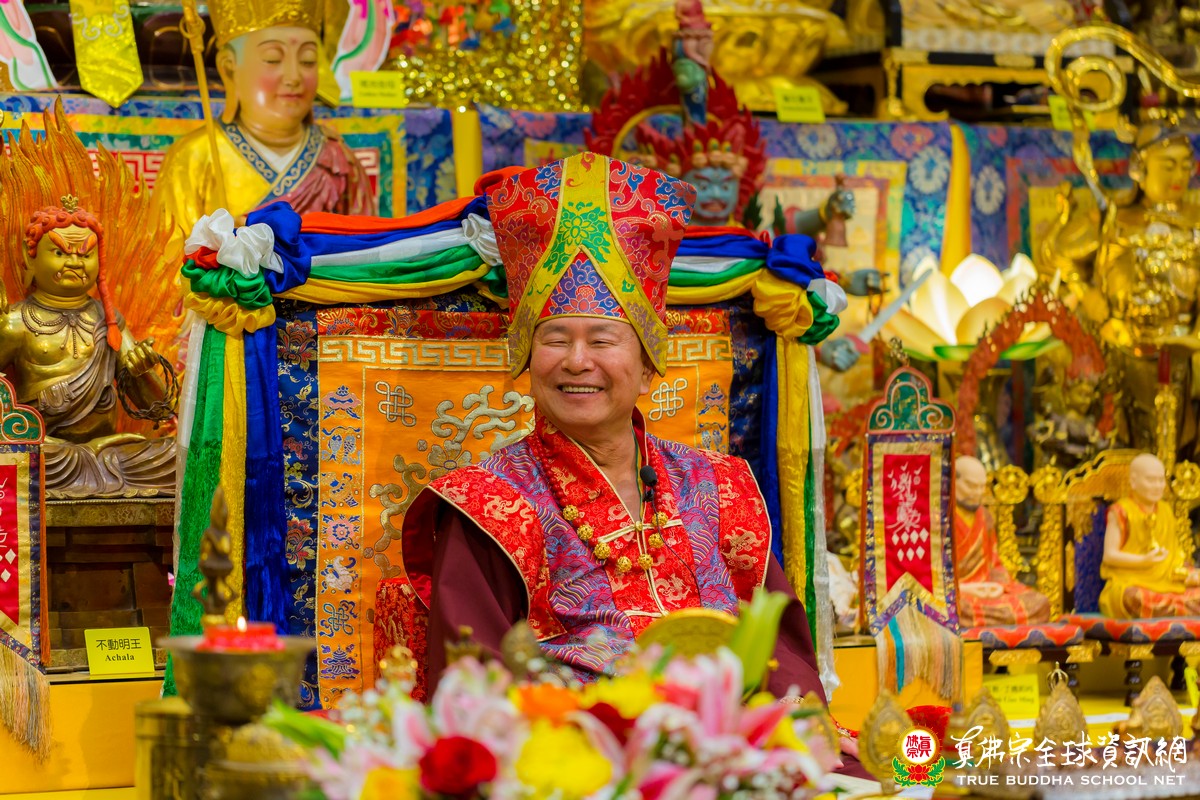 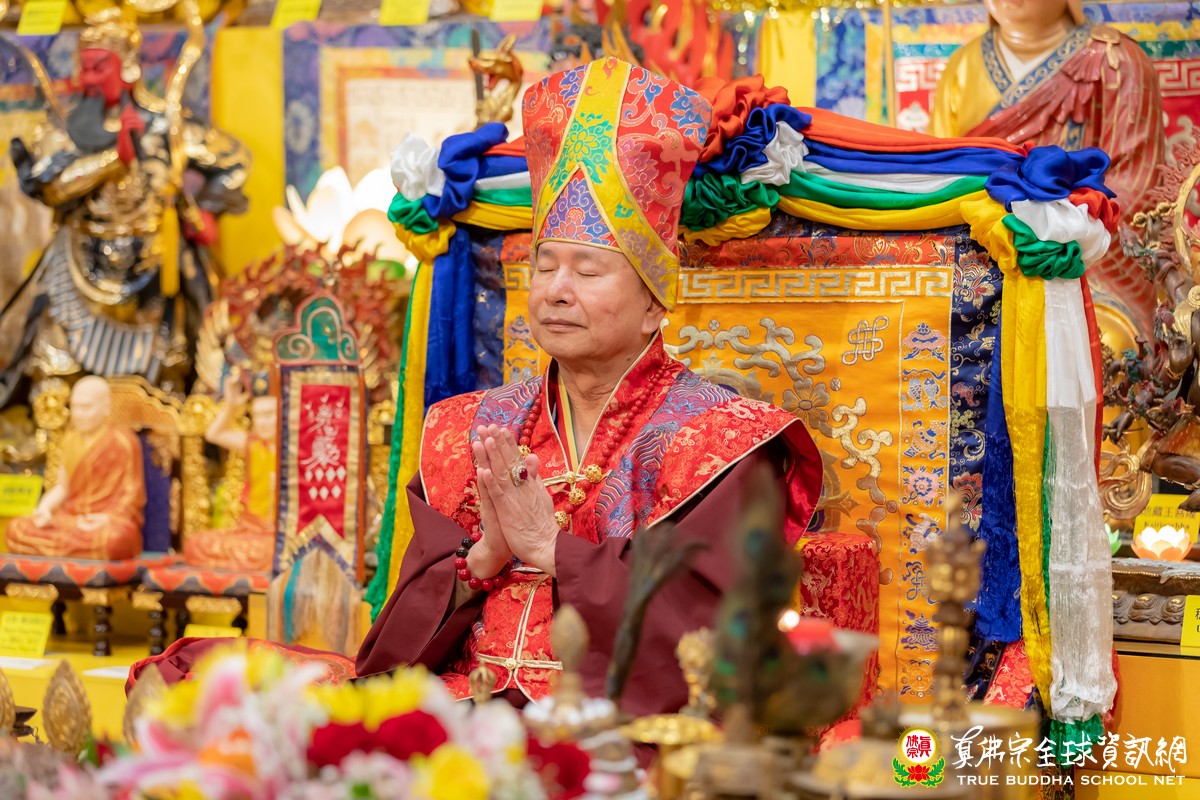 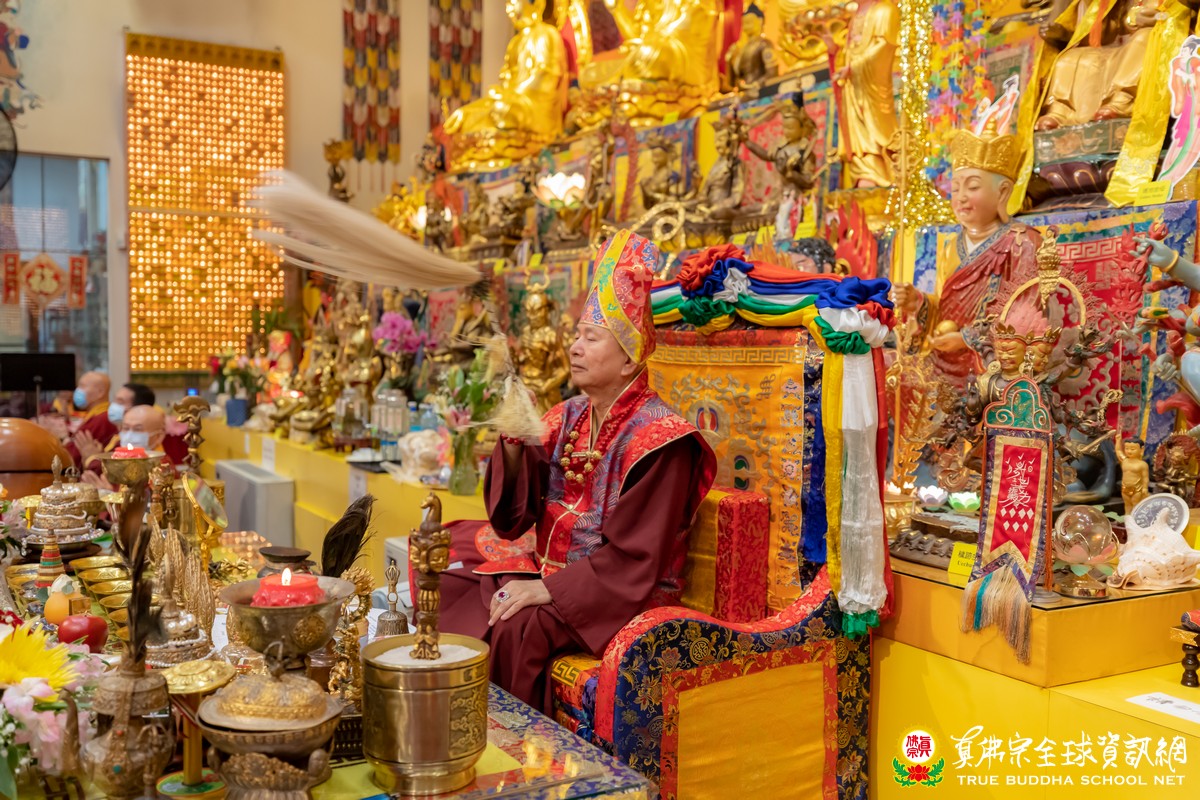 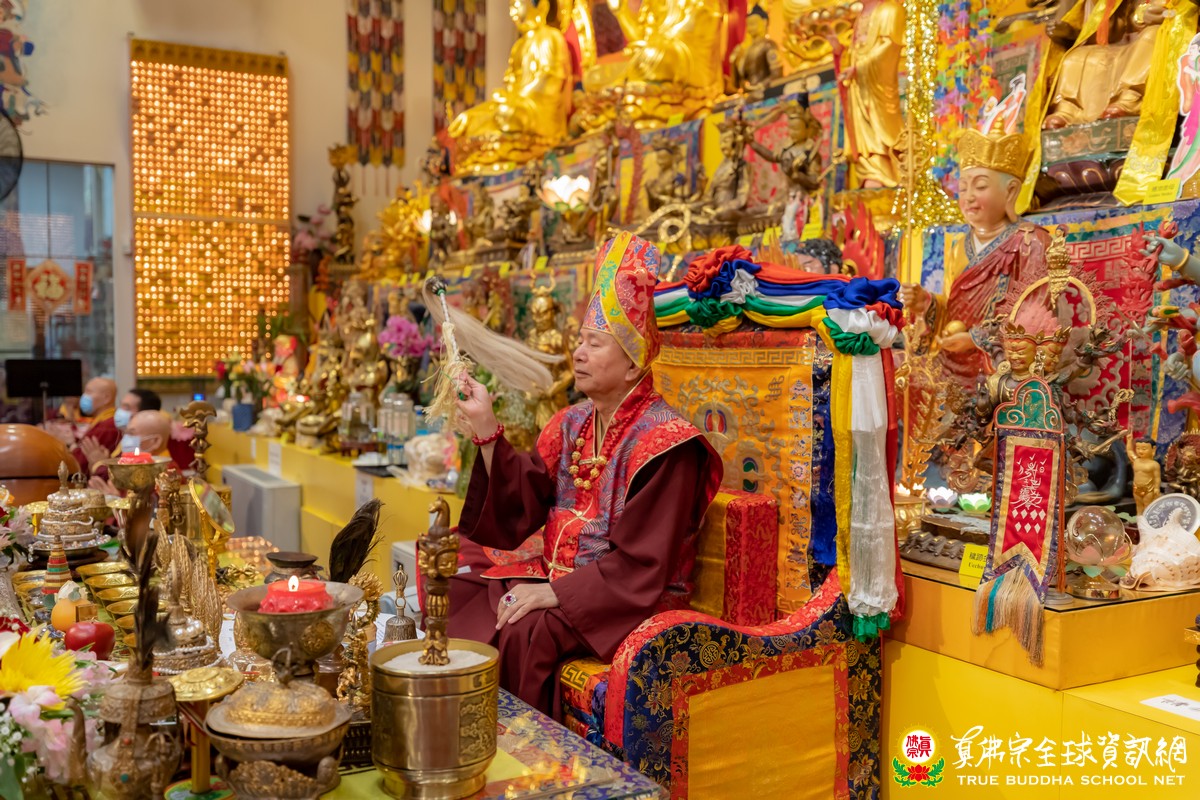 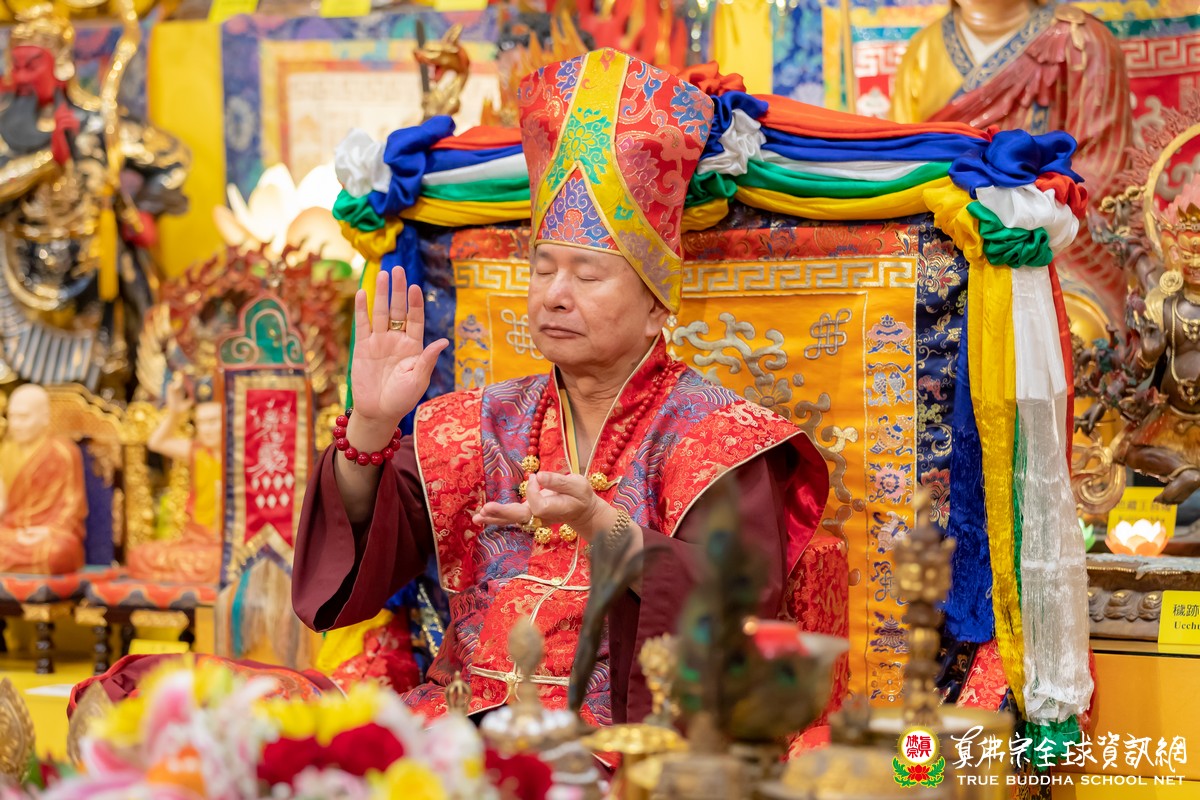 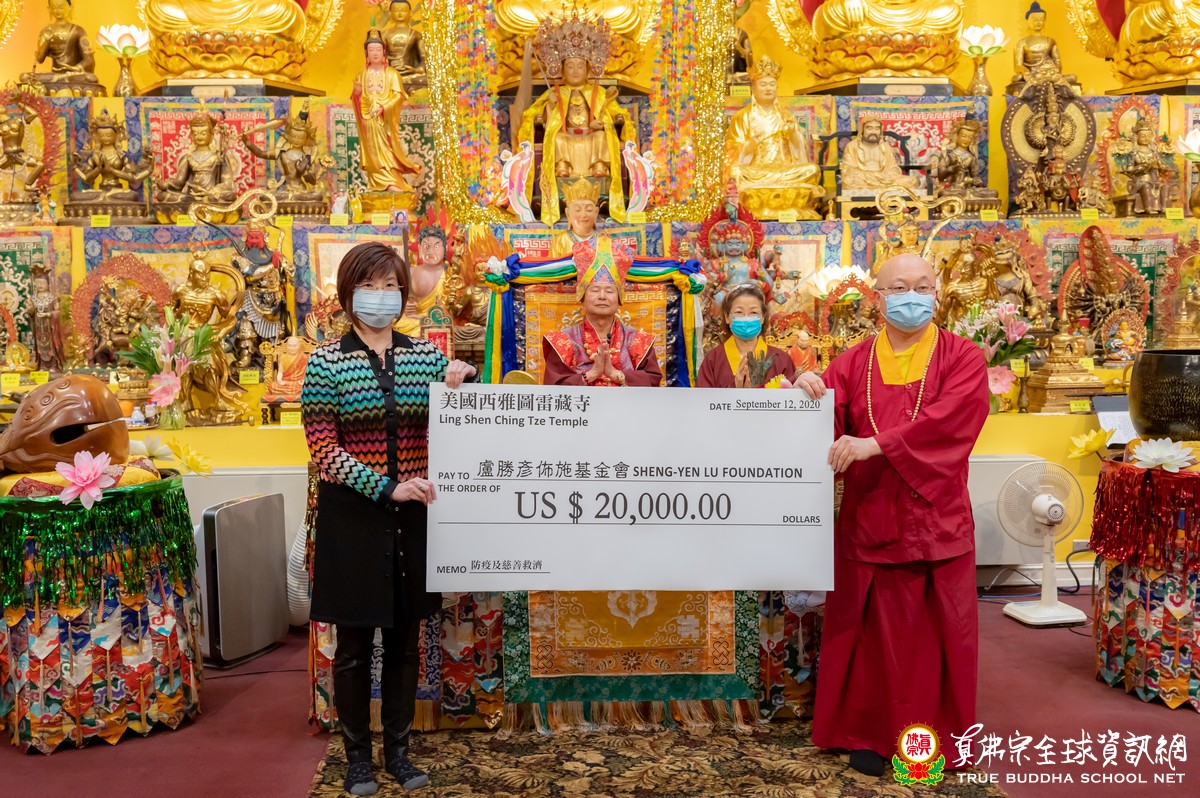 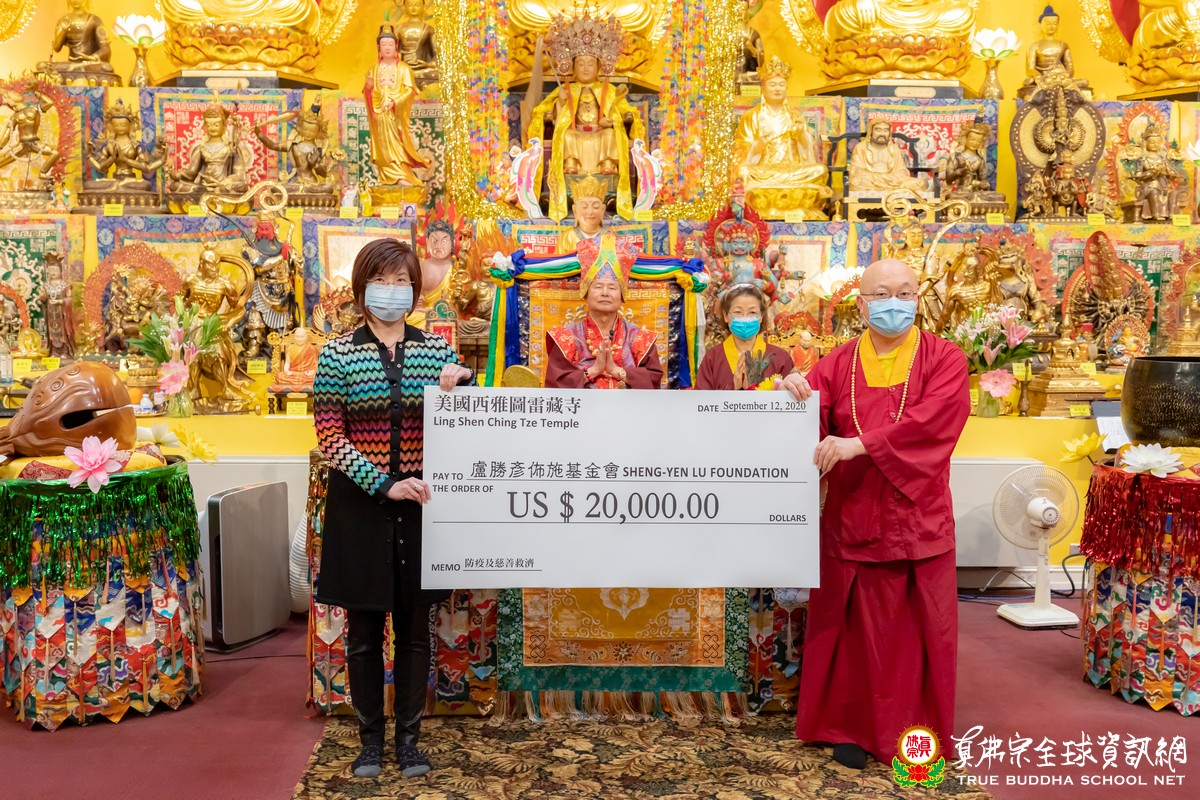 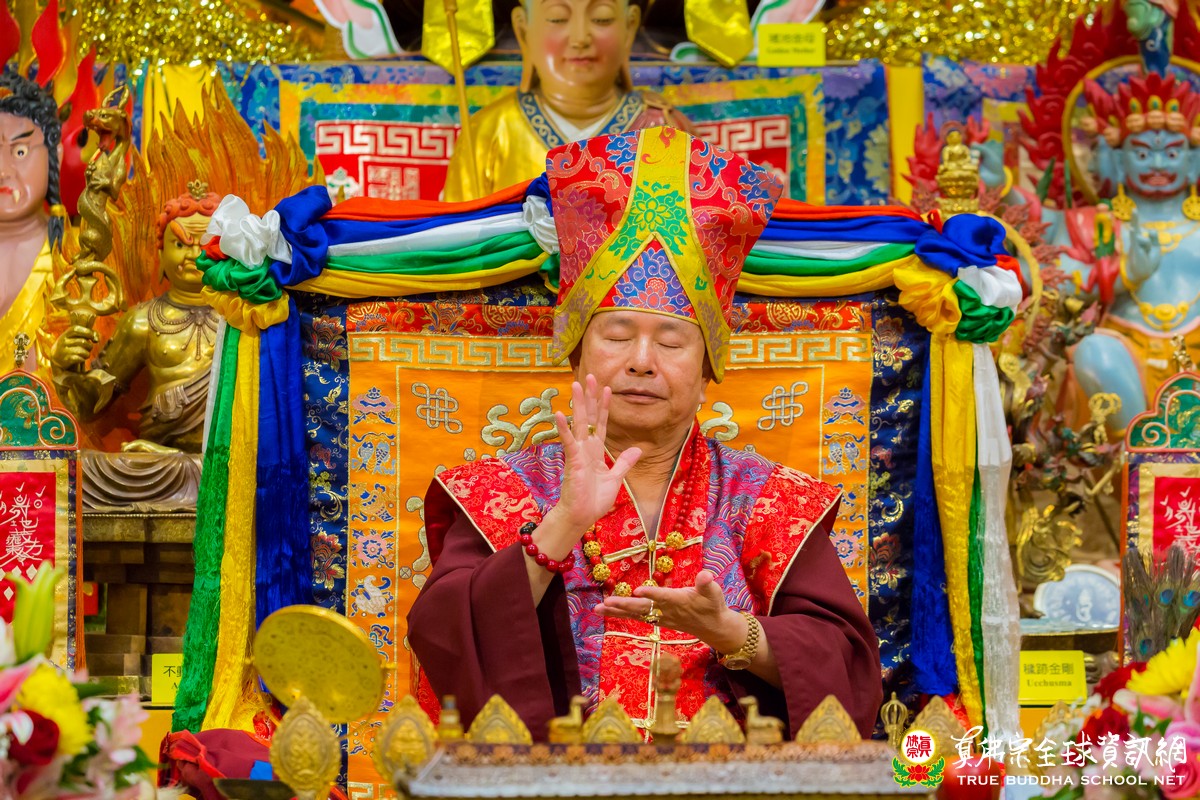 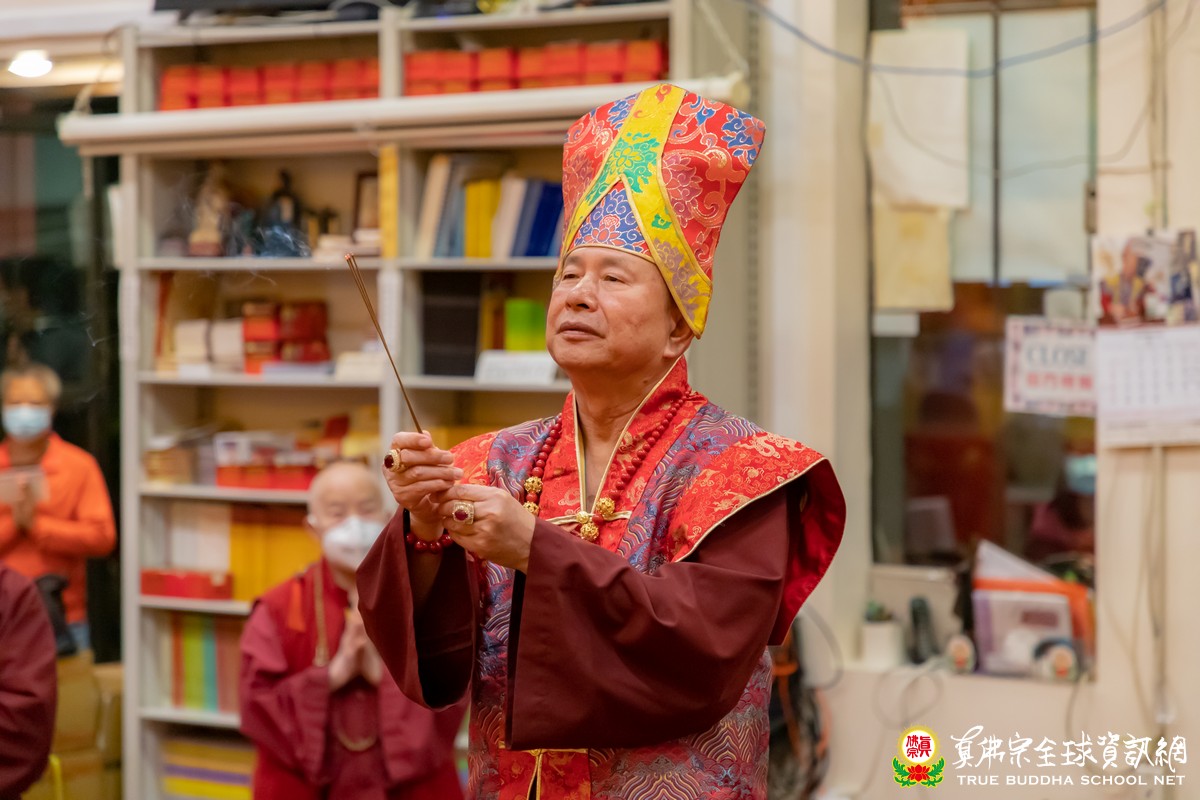 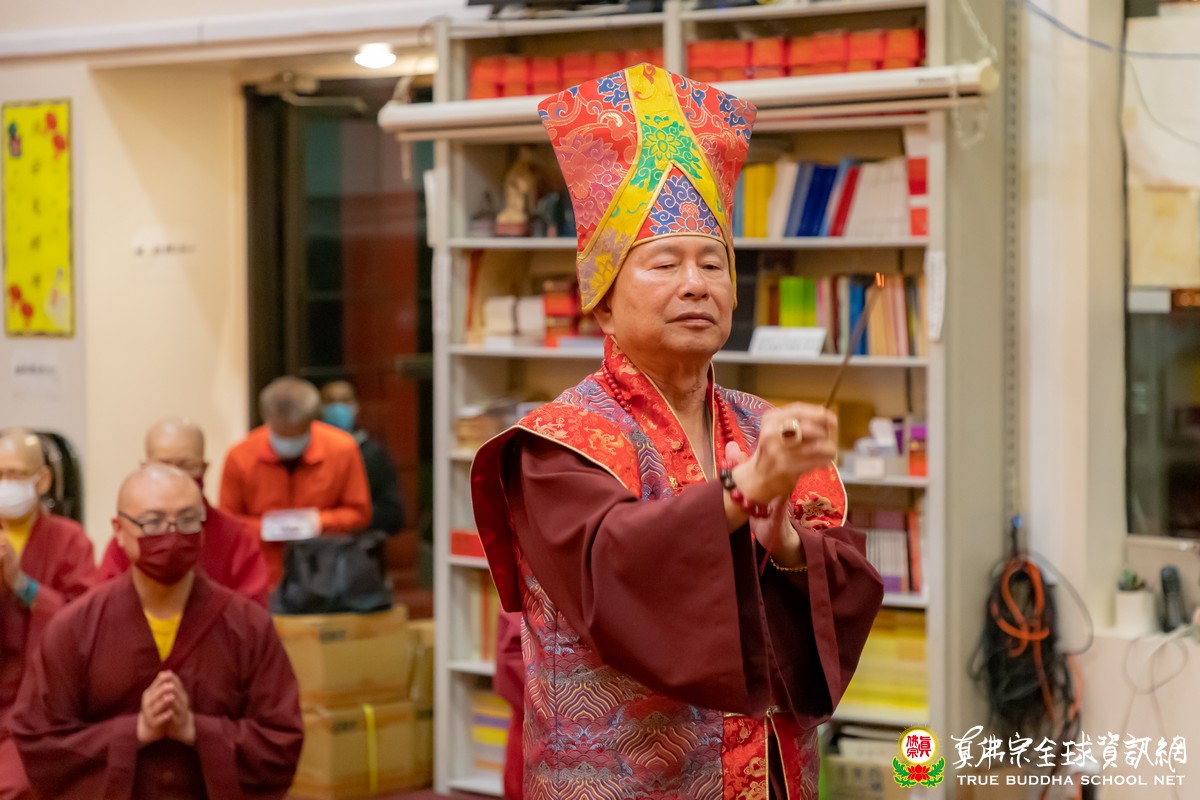 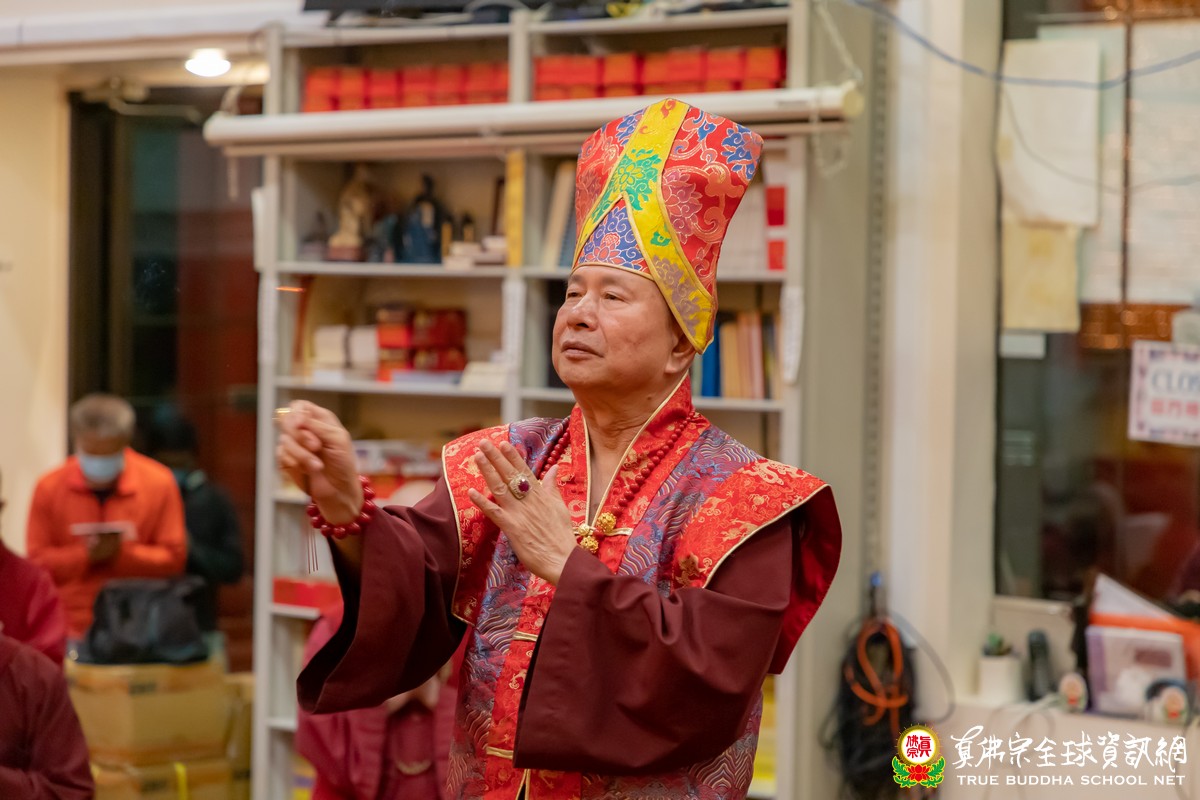 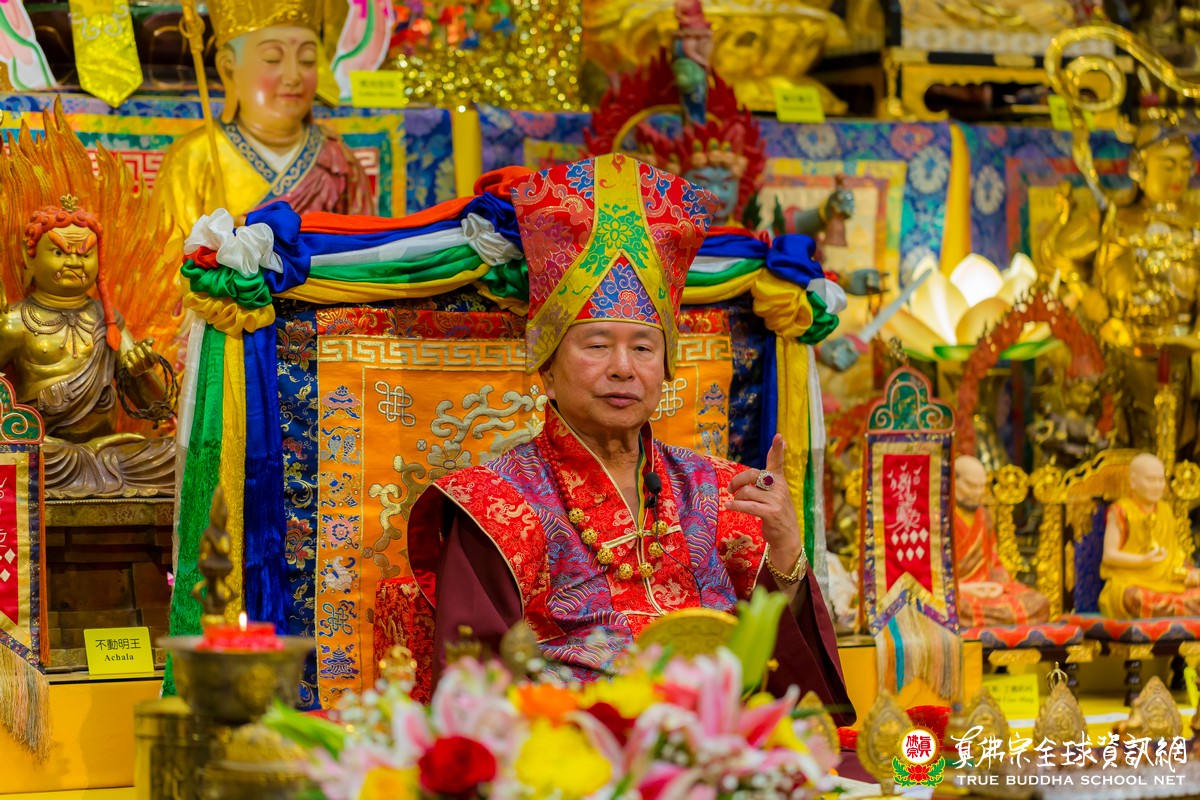 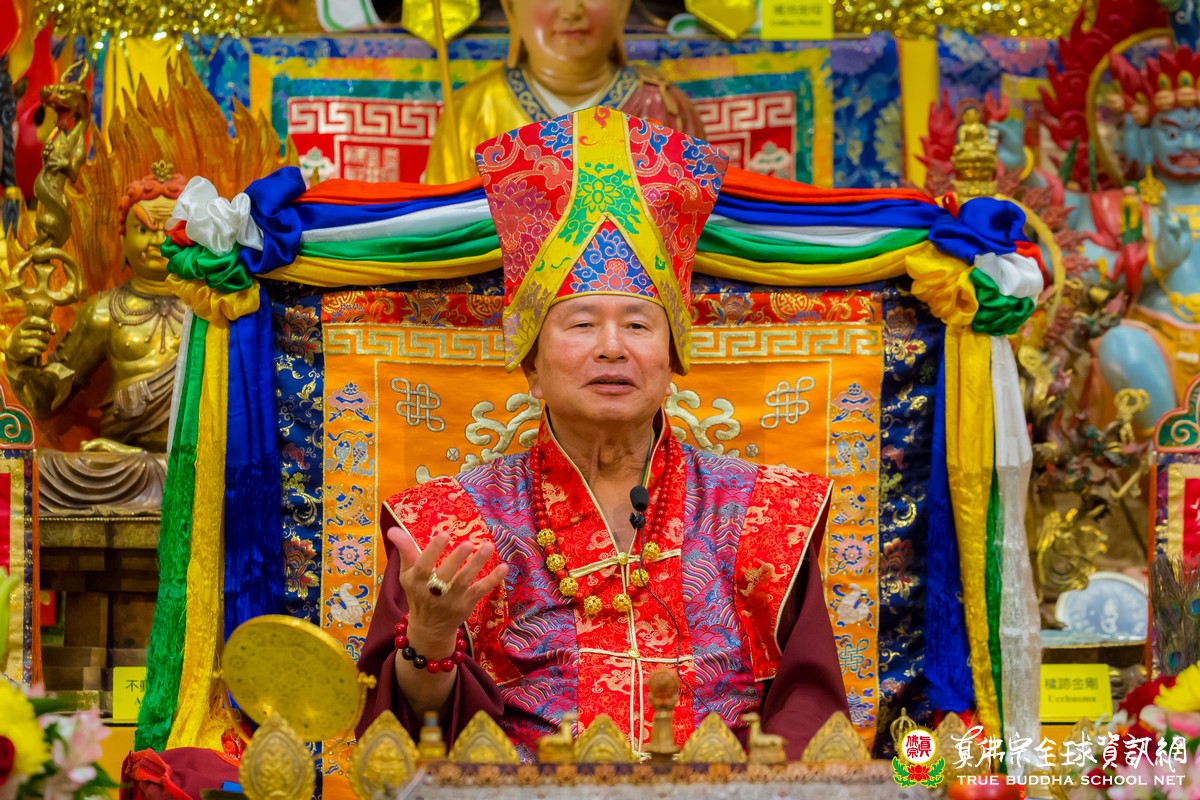 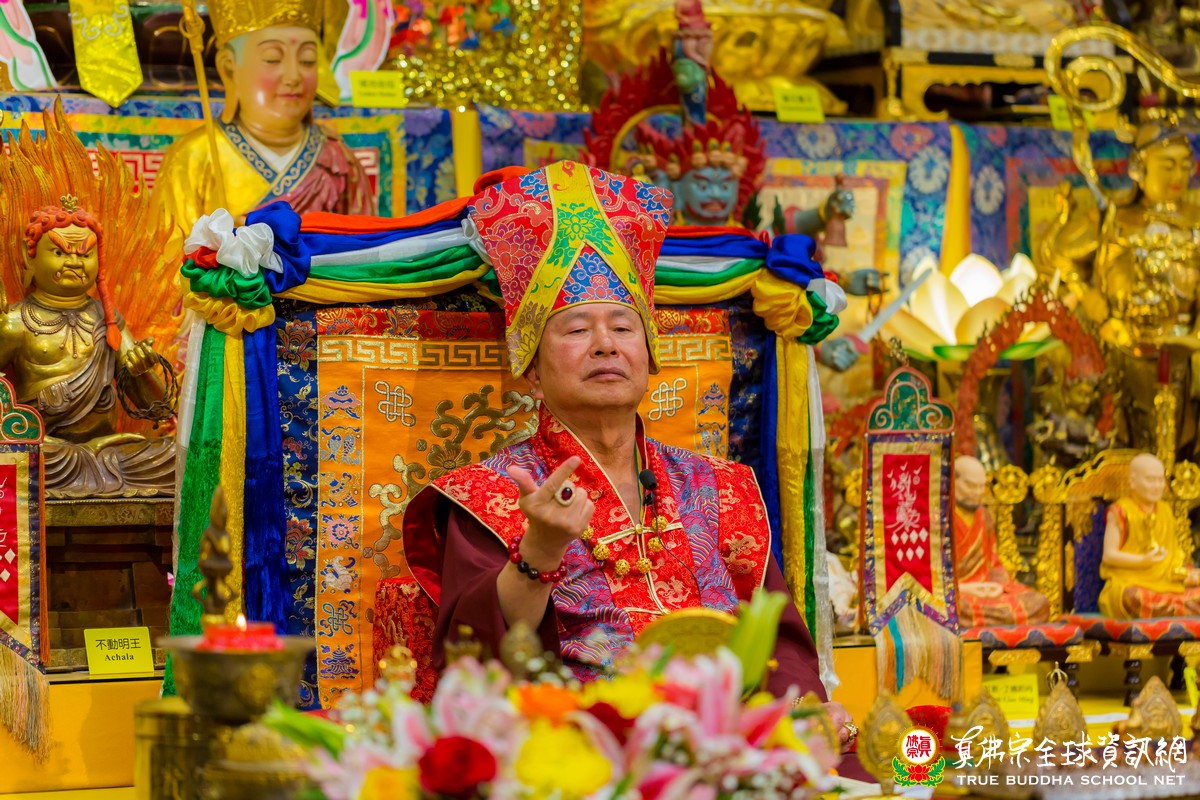 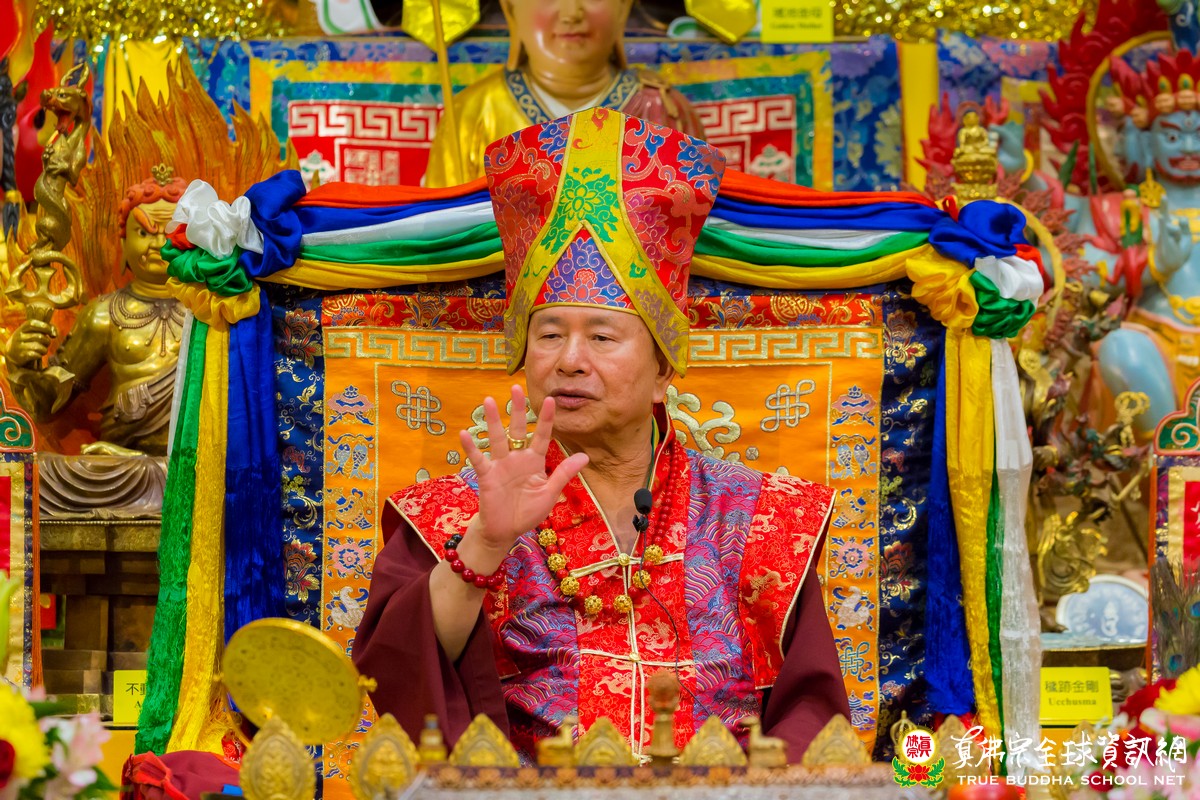 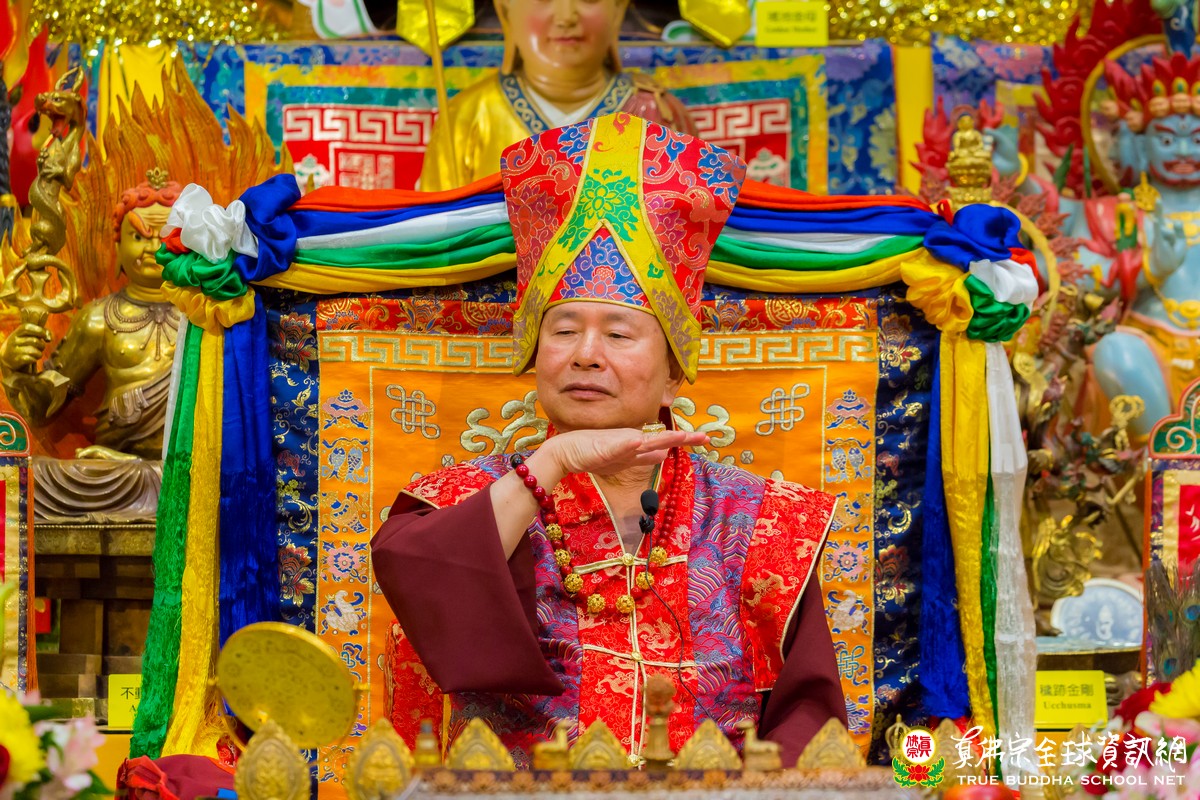 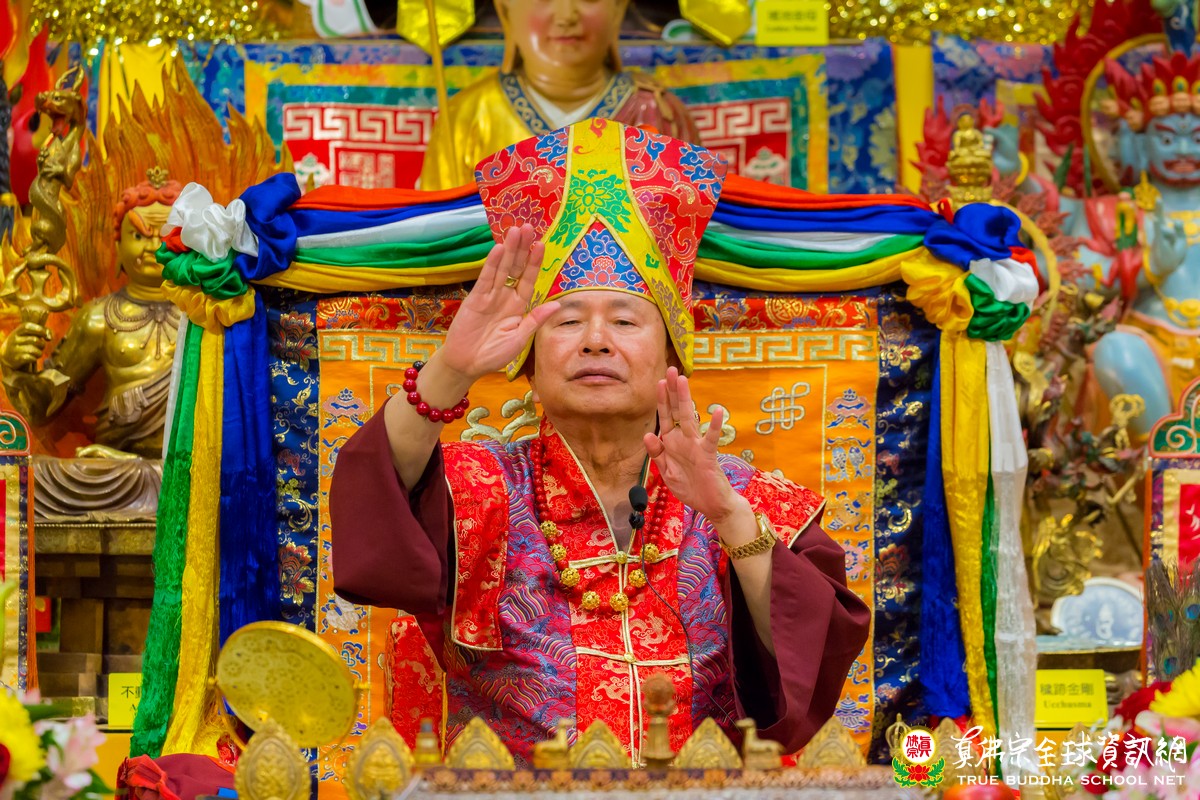 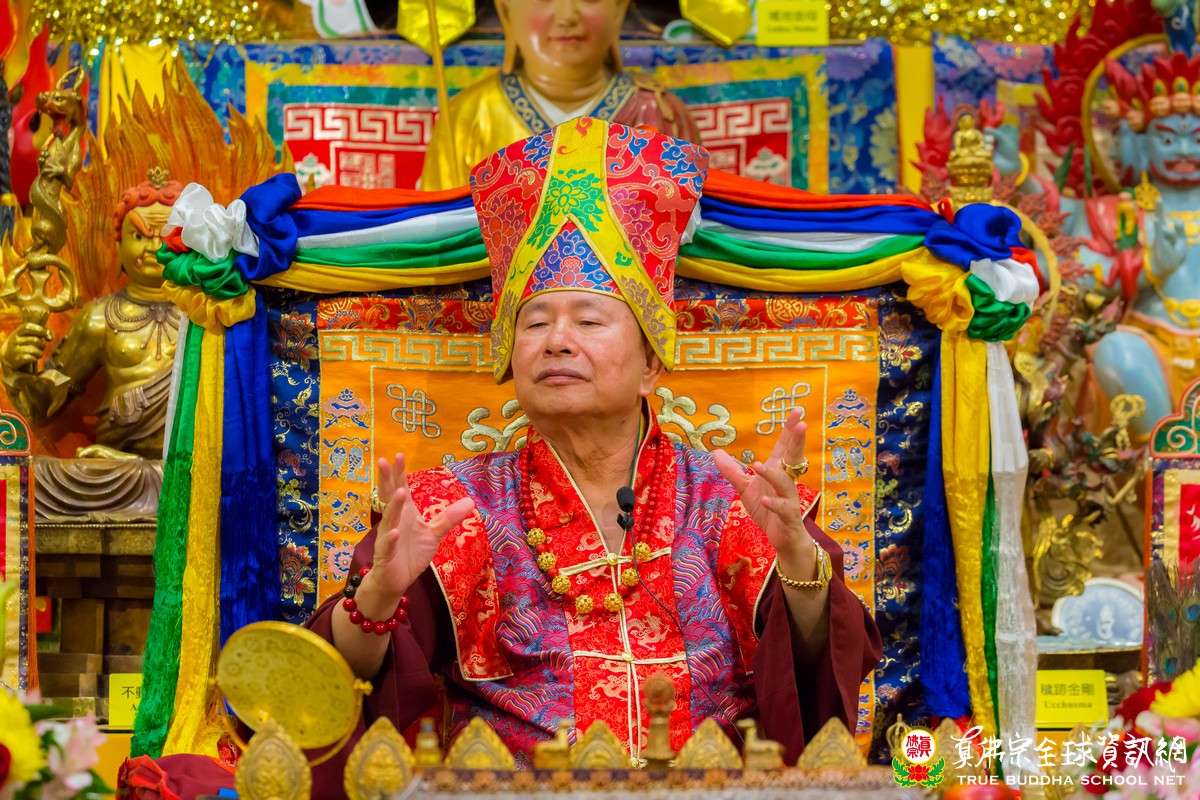 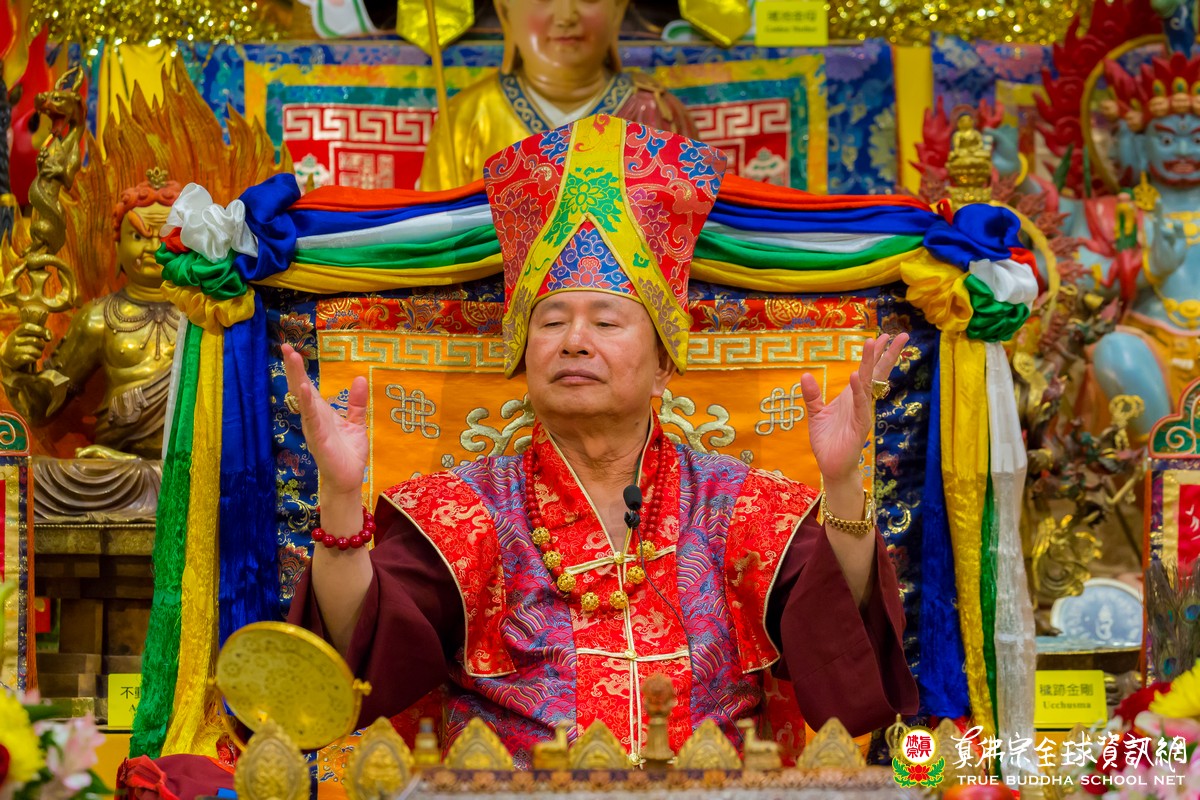 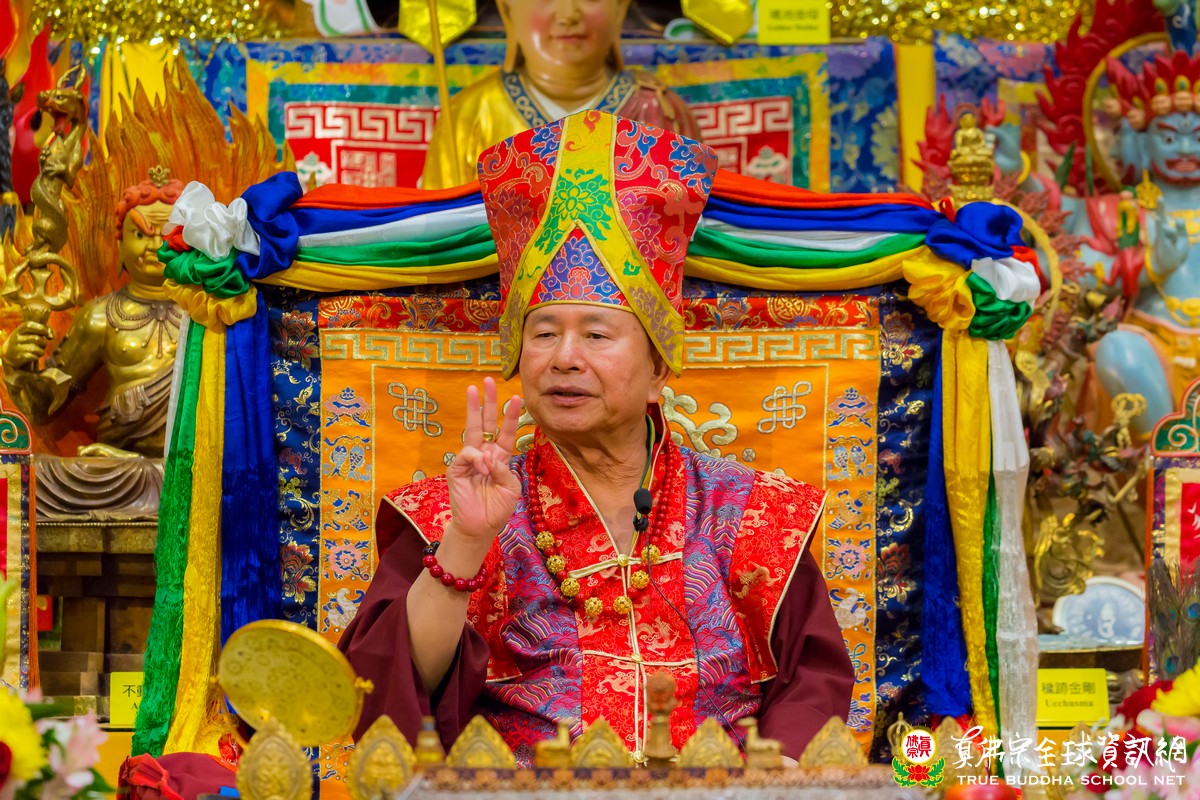 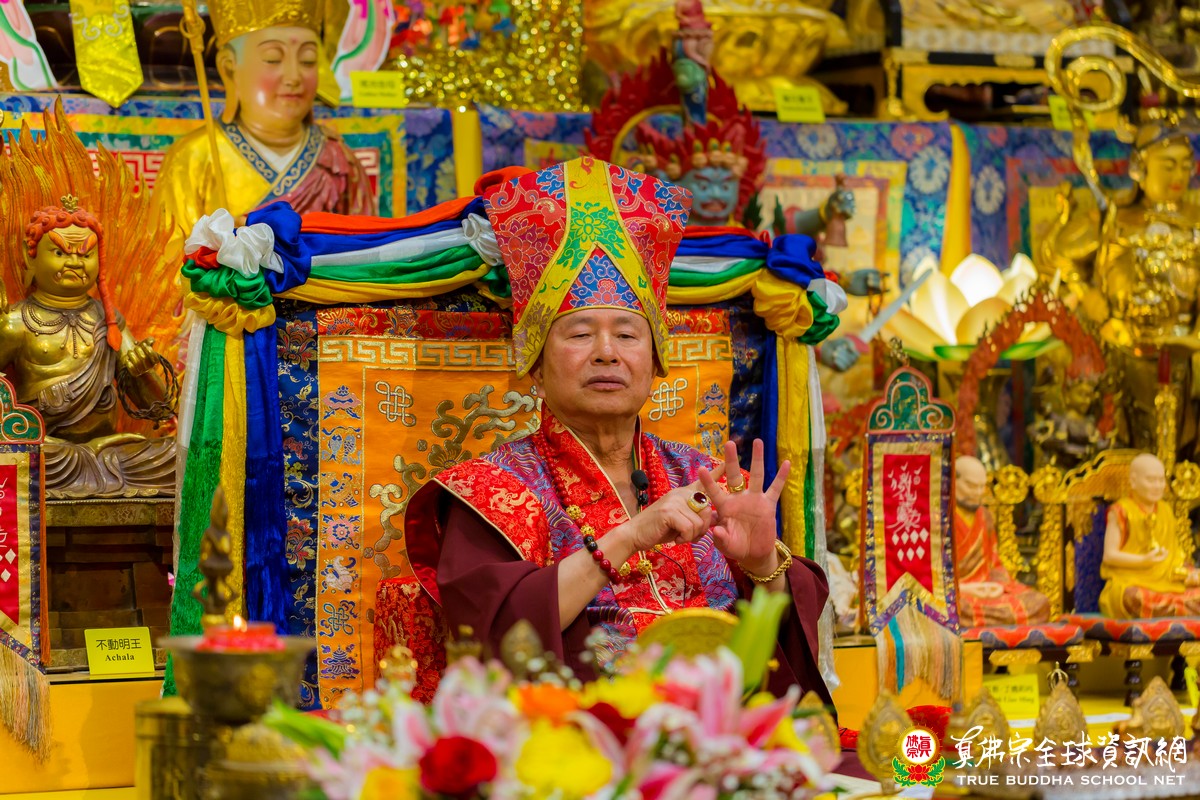 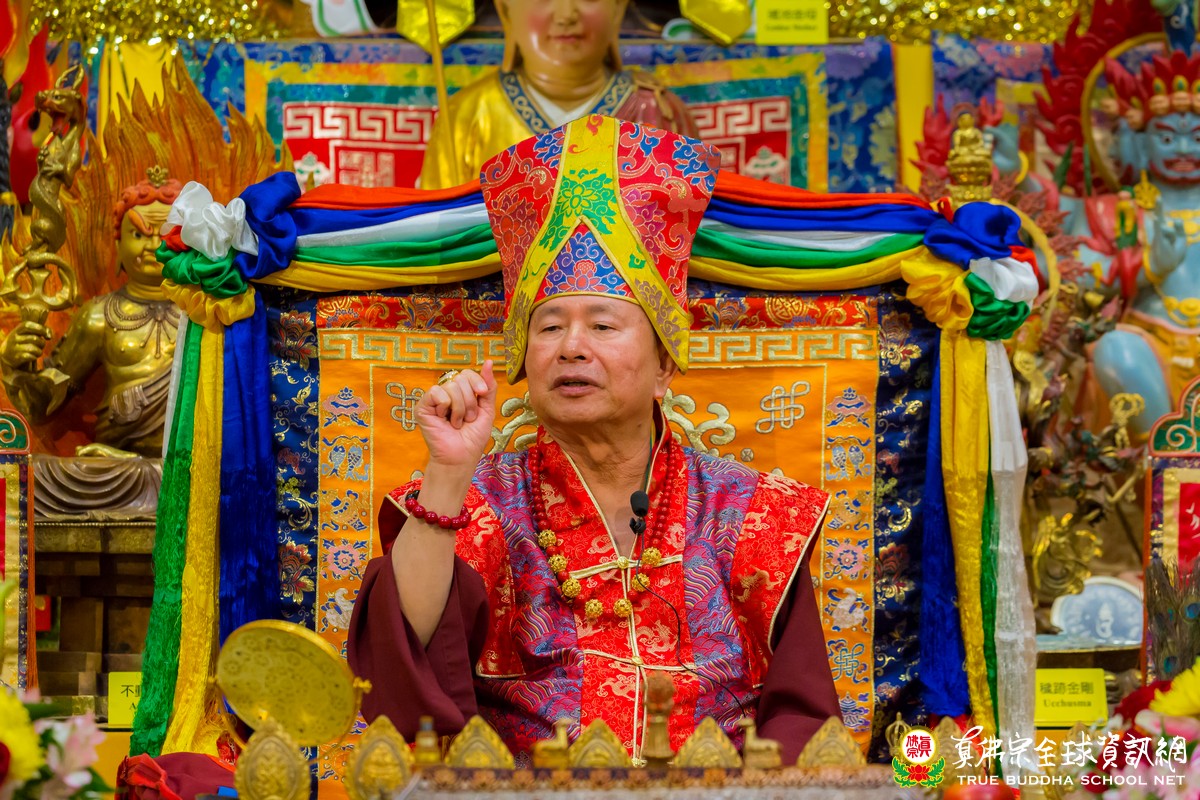 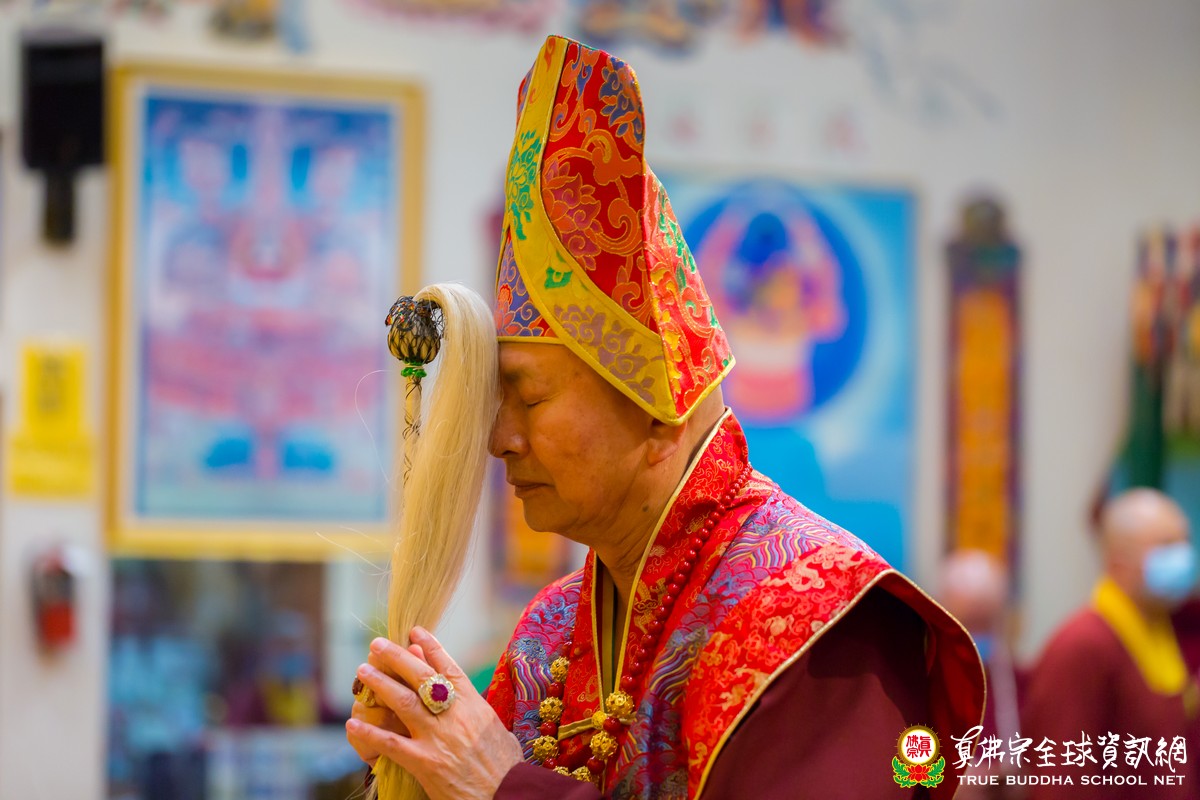 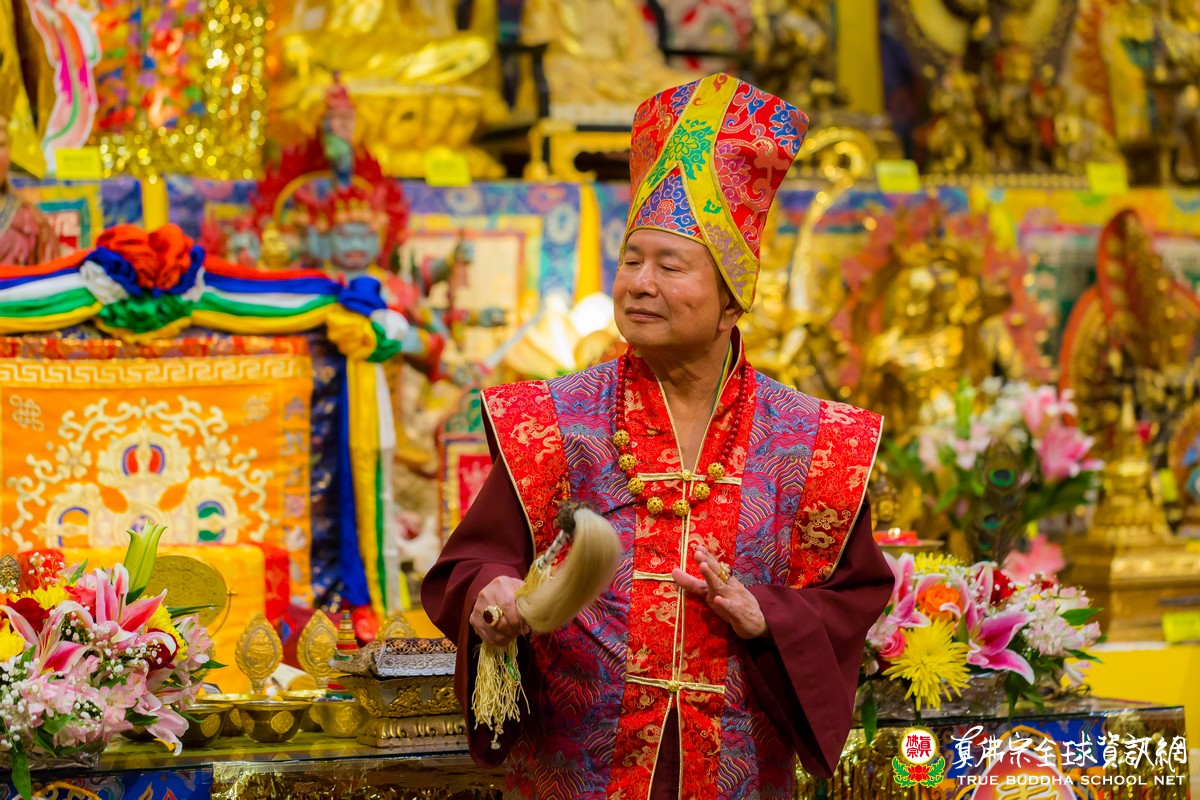