Mahamayuri is also called the Buddha Mother Great Golden Brilliance Mahamayuri, or Maha-mayura-vidy-rajni in Sanskrit. In ancient India, Mahamayuri Practice was widely cultivated by lay and ordained practitioners of the two vehicles. Mahamayuri is an extremely important principal deity practice in Tibetan Buddhism, and one of the four major practices in Japanese Vajrayana.

According to the Buddha Mother Mahamayuri Sutra, during the era of the Buddha, a monk was suffering from a painful snake bite. After Ananda informed the Buddha of the situation, the Buddha transmitted a mantra able to dispel ghosts, poison, and evil diseases. This mantra was the Mahamayuri Mantra. In addition, long ages ago, there was a great golden peacock king (the Buddha in a previous lifetime) residing on a snowy mountain. Due to his regular recitation of the mantra, the peacock had a safe and peaceful life.

One time, the peacock indulged in pleasure. Instead of chanting the mantra, he went to play with female peacocks in a distant mountain and was caught by hunters. He restored his right mind immediately after being captured and began to chant the mantra. Finally, he was able to escape from the hunters and regain his freedom. Because the Buddha discoursed about her, Mahamayuri and her mantra became well-known throughout the mundane world.

Mahamayuri has many uncommon practices, such as Star Light Body Practice, Praying for Rain Practice, Rain Stopping Practice, Earthquake Suppression Practice, Love and Respect Practice, Mind and Body Purification Practice, Exorcism Practice, and Disease Eradication Practice. The background of the Mahamayuri is extraordinary. She wears a Mahavairocana crown. She is an important transformation of Mahavairocana. Mahamayuri is the sambhogakaya of Shakyamuni Buddha because in one of his previous lives, Shakyamuni reincarnated as the Peacock King. Mahamayuri is also a transformation of Amitabha Buddha. The Dharma King praised the formidable power of Mahamayuri, the principal deity of today’s homa. “The deity has three kinds of Dharma power and is capable of performing the four karmic practices of calamity eradication, enrichment, subjugation, and magnetization.

Because the pandemic is still spreading relentlessly in some countries, the Dharma King will preside over another Tara Who Saves from Contagious Diseases Homa Ceremony on June 21, 2020 to pray that COVID-19 will be swiftly eradicated, the global economy will be restored to good health, every country’s commerce will relaunch and improve, and that race relations in the US will be peaceful and harmonious.

Q: Dharma King taught an Evil Spirits Avoidance Mudra during the new year interview of 2015. Please elaborate the source of the mudra, how and when to use it, and whether there is an accompanying visualization and mantra? 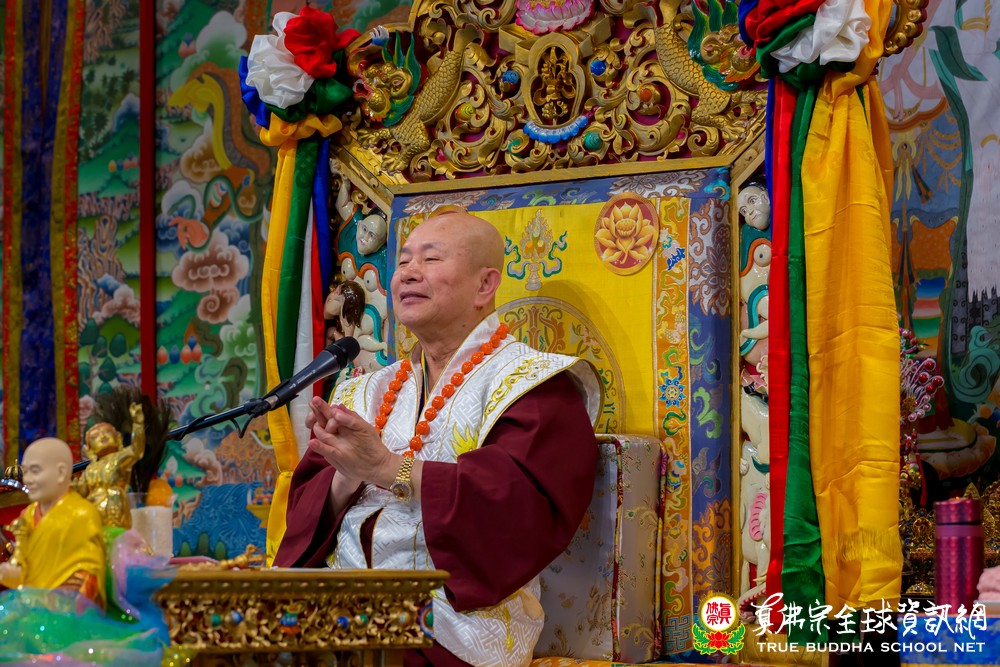 A: One can point the middle fingers to the front. Once the power emits from the mudra, light will be sent out and all the evil spirits and ghosts will be dispelled. Actually, not just dispelled, they will be finished. The Eminent Sanshan-Jiuhou (Mr. Three-Peaks Nine-States) transmitted the mudra to me 50 years ago. Chant “Hum, hum, pei. Hum, hum, pei” with the mudra. It will dispel all evil spirits and ghosts.

Q: In the chapter ‘A Skinny Old Man’ of Book 272, Immerse Yourself in Divine Light, Grandmaster mentioned that Maudgalyayana was just an old farmer in this lifetime and his condition has been getting worse in each successive lifetime. His light and supernatural power have been engulfed by karma. Wasn’t Maudgalyayana already a major arhat, which is one of the Four Holy Realms and a stage of no falling back? What caused his decline in status?
A: It was because he has to repay seriously negative karma resulting from excessive killing in previous lifetimes. Supernatural power does not liberate one from the cycle of birth and death. Supernatural power is merely a byproduct of cultivation. One can neither become a buddha nor escape from karma merely because of supernatural power. Maudgalyayana, one of the 10 major disciples of the Buddha, had the foremost supernatural power during the era of the Buddha, but he also killed many heretics with his supernatural power. Along with other killing, this resulted in significant negative karma. Therefore even with his supernatural power, he was unable to escape his karma resulting from murder. As described in the book, despite his primordial soul being an arhat, he is currently an old farmer and his emanation body is still suffering in the saha world.

Q: Does it mean a disaster is imminent if one’s face looks dark, one feels upset, is sweating excessively, smells, or feels short of breath?
A: Sweating due to the hot weather is normal. However, if sweating is abnormal, for example, one feels alternately hot and cold, then it is a misfortune because one is sick. If one’s qi is weak, one is having short breath, or if not just a dark face but one’s glabella is dark, one may cultivate Ushnishavijaya Practice to avoid the calamity.

Q: When cultivating or reciting a mantra, if one experiences warmth and feels light, should one still visualize the seed syllable emitting light and observe breathing? I feel I am out of the meditation as soon as I purposely perform the visualization and the observation.
A: One should keep two key words in mind while meditating. The first is relaxed, and the other is unperturbed; mind is open, expansive, and merged with the universal consciousness. One is relaxed and unperturbed when there are no thoughts whatsoever. If a thought suddenly arises, one’s meditation becomes fabricated. One is no longer meditating when the mind begins fabricating thoughts.

The Dharma King encouraged everyone to meditate in accordance with the methods taught in Lamdre. “All the different techniques of meditation are the Path of Accumulation for entering samadhi”.

The Dharma King continued to expound Lamdre. During meditation, if one is able to remove thoughts without being followed by a new thought, within this intermittent period of no thoughts, one attains the “away from being bound fruition”.

If one’s mind is occupied by chanting a mantra, this means the fruit of entering meditation has not yet ripened. This is called “unripe fruition”.

When the body begins to produce a kind of blissful happiness, when one feels light and peaceful, even if suffering arises in the body, one can use the bliss one has generated to eradicate the suffering. The bliss will flow and circulate endlessly. This is called “fluent flowing happiness fruition.”

If one meditates diligently, severs thoughts completely, and is free of grasping, that is “uncontaminated fruition”. The Dharma King explained that the real uncontaminated fruition is without darkness as well as without light, because if one has thought of light, one will be bound by the light; if one has thought of darkness, one will be bound by the darkness. Therefore, when one is in a true meditation, there is neither darkness nor light, no attachment whatsoever.

The Dharma King thanked disciples who attended the ceremony and listened to his discourse via the cloud. “That we can gather together in this format is a kind of good fortune. It is my pleasure to answer everyone’s questions. I don’t want to be a donation box. I want to continue to propagate and discourse Buddhadharma so that the seed of becoming a buddha will be planted in the body of every disciple.”