On Saturday, May 30, 2020, a constant thunderstorm in Seattle washed away the city’s turmoil and bustle. At 8:00 PM, Grandmaster Living Buddha Lian-sheng and Master Lianxiang were present at Seattle Ling Shen Ching Tze Temple (LSCTT) for a live webcast. Due to COVID-19 stay-at-home restrictions, everyone happily met together for Grandmaster’s discourse via the internet.

After performing a simplified practice, Grandmaster prayed to the principal deities, Mahavairocana Buddha, Buddha Locana, Amitabha Buddha, and Padmakumara, to bestow abundant provisions and good fortune on all disciples and increase their store of merit and virtue.

Following the practice, the True Buddha Prajna Treasury presented a video introducing Grandmaster’s Book 163, Crossing the Ocean of Life and Death, which is being republished.

During his discourse, Grandmaster informed everyone about an elderly disciple named Lotus Shubiao who recently passed away and was from White Cloud Temple in Canada. Lotus Shubiao would go to bed every evening at 6:00 PM, then arise at 2:00 AM to recite the True Buddha Sutra and the High King Sutra, and cultivate. This disciple always followed this routine without fail. After Lotus Shubiao was cremated, a large number of extremely spherical and bright sariras were found in his cremains, which proves that True Buddha School well deserves its reputation.

Sariras have also been found in the cremains of other True Buddha disciples, including translator Hanifa’s mother and father, and Master Lianhua Yimin. In addition, there were death row prisoners in Singapore Changi Prison who, after taking refuge, diligently recited mantras and the High King Sutra. Every one of these death row prisoners had sariras in their cremains. Grandmaster’s mother, Shima, also had sariras in her cremains. Her sariras were enshrined at the LSCTT. One time, Grandmaster woke up in the morning to find many sariras next to his bed. He has no idea how they got there. Grandmaster can also feel a sarira in each of his ears as well. He hopes that everyone’s cultivation will leave a memento behind after they depart for the pure land. That would be wonderful!

Grandmaster continued by answering disciple questions submitted in the Interaction is Power series.
Q: While I’m performing Treasure Vase Breathing, my qi enters the dantien and naturally produces psychic heat. This psychic heat ascends to my navel, heart, and throat. I have not yet attained spiritual union in Guru Yoga. This phenomena just occurs naturally. How should I proceed?
A: Where there is psychic heat there will be inner fire. If this inner fire can ascend to the navel chakra, the heart chakra, and the throat chakra, it’s a very good phenomena indeed. In the future, you should practice Guru Yoga and personal deity yoga. When you have successfully accomplished Guru Yoga, personal deity yoga, and inner practice, you will have tremendous attainment, an accomplishment that is truly incredible. Congratulations!

Q: Does one’s physical constitution influence the process of cultivating qi? For example, will there be a difference in ability to cultivate qi between someone who does yoga exercises, is a fitness enthusiast, or never exercises at all? Is one’s ability to cultivate qi limited by age? Is it difficult for an older person to cultivate qi?
A: Each person’s physical constitution, qi, channels, and light drops are different. Some people attain results easily. For others, attaining results is difficult. A practitioner’s age also makes a difference. A person who cultivates qi while young and strong brings a lot of energy to the path. An older person may not bring sufficient power and energy to cultivate qi. In addition, there are fundamental differences in the physical constitutions of males and females. Males have greater strength whereas females have less strength.
Practicing yoga is namely practicing Vajra Fist which opens the channels so that qi can flow freely without obstruction, light drops will descend, and the five chakras will open. Those who practice yoga will, of course, find these yoga practices useful for cultivating qi. One who is in the habit of exercising will have more strength for cultivating qi. Grandmaster, for example, exercises and works out continuously. Even at the age of 76, I still have strong pectoral and back muscles.

Q: There is upper-body qi, middle-body qi, and lower-body qi in our body. If this qi is weak or obstructed, is there any way to nourish or remove obstructions?
A: There are, altogether, five kinds of qi: upper-body qi, lower-body qi, balancing qi, circulating qi, and heart qi. The upper-body qi governs the upper half of the body whereas the lower-body qi governs the lower half of the body. The circulating qi governs the circulation of qi throughout one’s entire body. The balancing qi follows the inner fire within the central channel. The heart qi does not flow at all; it abides in the heart chakra. Were the heart qi to move, the soul would exit the body. If there are obstructions to the flow of qi in one’s body, one should regularly exercise complete deep breathing that is detailed, slow and long. One should practice inhalation/exhalation to enhance the unobstructed flow of qi. If one’s qi is weak, one should perform Vajra Fist. One can practice to open the brow chakra by slapping the area, but don’t overdo this by being too forceful. To exercise the throat chakra, it’s sufficient to turn the head halfway. To exercise the heart chakra, expand the chest by doing push-ups. To exercise the navel chakra, do sit-ups. To exercise the secret chakra, “ride a bicycle upside down”. These practices are for exercising the five chakras. There are also exercises for the seven chakras. Exercising one’s chakras in this way will transform one’s qi from weak to strong.

Q: After reciting “Om-bo-ru-lan-ze-lee” seven times, does one visualize Acala protecting one, not Vajrapani?
A: That is not correct. The mantra syllables “bo-ru” stand for Vajrapani, meaning calling Vajrapani who stands behind practitioners. It states in the Vajrapani Bodhisattva Sutra that there is a Vajrapani standing behind every practitioner who sincerely cultivates.
If one wants to visualize Acala protecting one, recite Acala’s mantra, “Na-mo-san-man-duo, mu-tuo-nan wa-ri-la, lan, han.” The “han” syllable is Acala. One’s mantra recitation must match one’s visualization.

Grandmaster continued to discourse Lamdre:
What is the outer tip? One’s mind and qi concentrate at the tip of the two veins of essence and blood. What is the tip? We just need to ask males. Knowing this by this way is sufficient. What is the inner tip? It is located at the tip of the central channel, which is the lowest part of the central channel, the root chakra. The syllable “ah” is at navel chakra. Inner fire rises like an up-side-down “ah”. When the bodhicitta moon fluid drips from the brow chakra to the navel chakra, the half “ah” transforms into a full “ah” syllable.

Here is a joke: A guy climbed to the top of a mountain. To the abbot of a temple there, he cried out: “My compassionate buddha, my guru, I have seen through the vanity of the world and have no more passion toward this mundane world. Please ordain me!” The abbot got a long broom from next to a buddha statue, hit the guy with it, and said angrily “Get out of my sight!” Every month you come here wanting to be ordained! Is going to a barber really too expensive for you?!” If I heard a guy was coming every month just to get his head shaved, I would shave it for him because of the forbearance of the non-arising of dharmas.

As we listened to Grandmaster’s informative and inspiring Dharma discourse and received the blessings of the lineage, we hoped Grandmaster’s discourse would never end. We are eagerly awaiting to be with Grandmaster next time for more teachings, positive influence, and purification of the Buddhadharma. 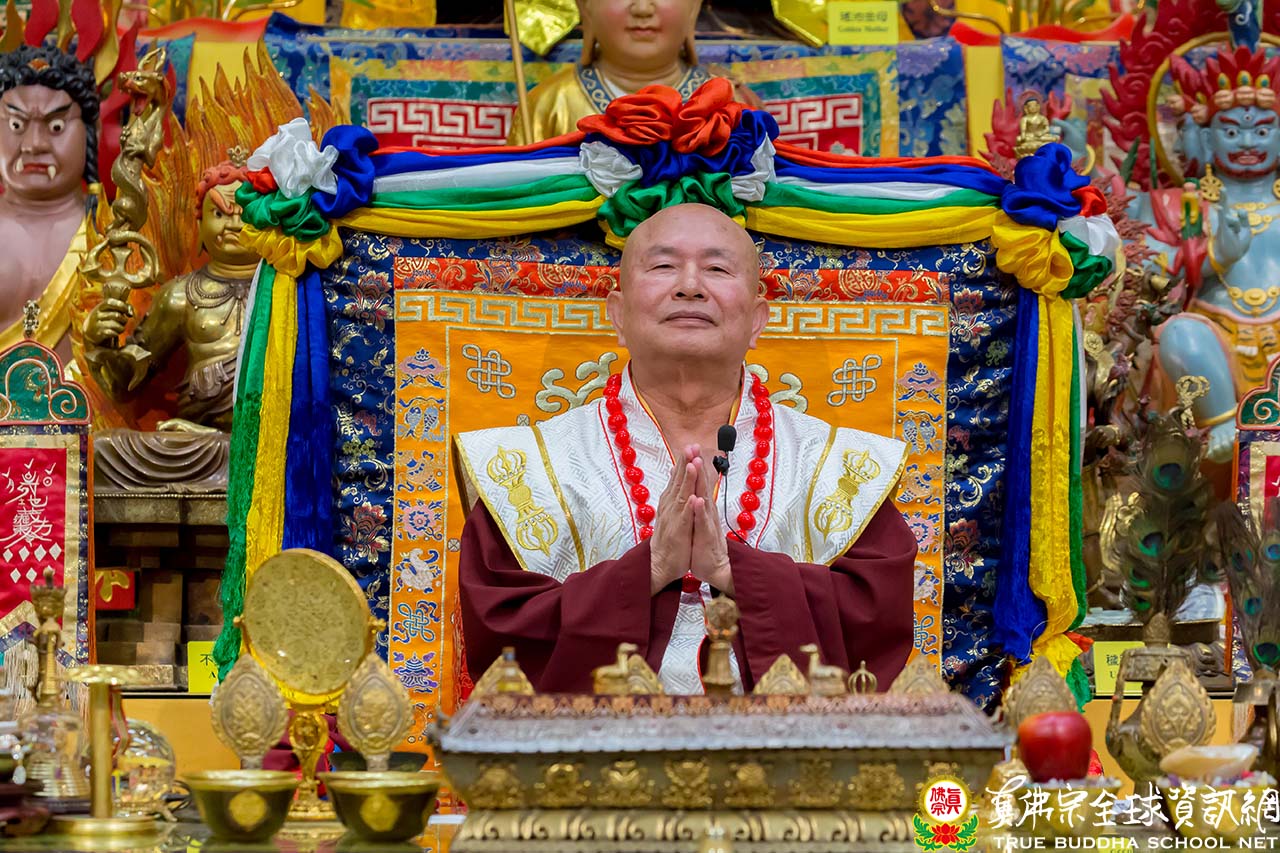 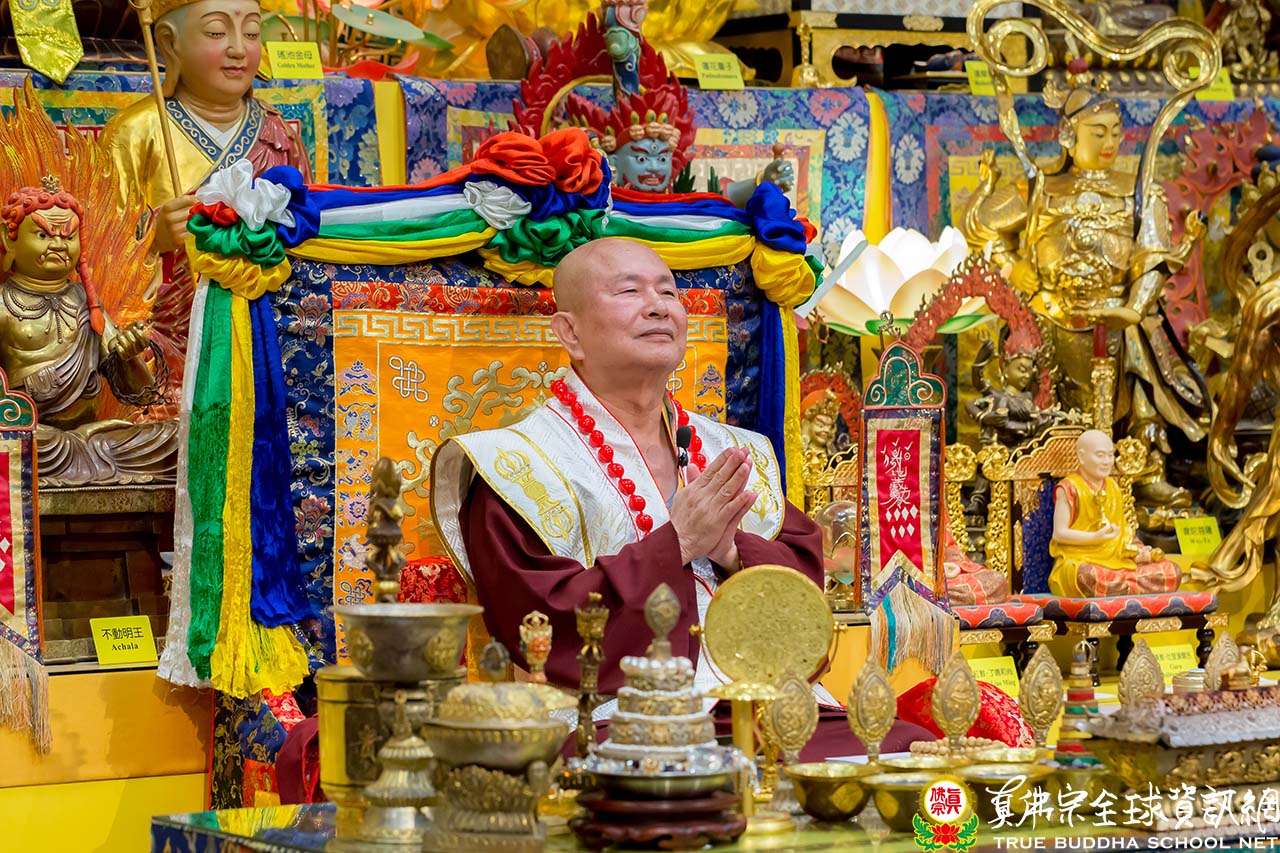 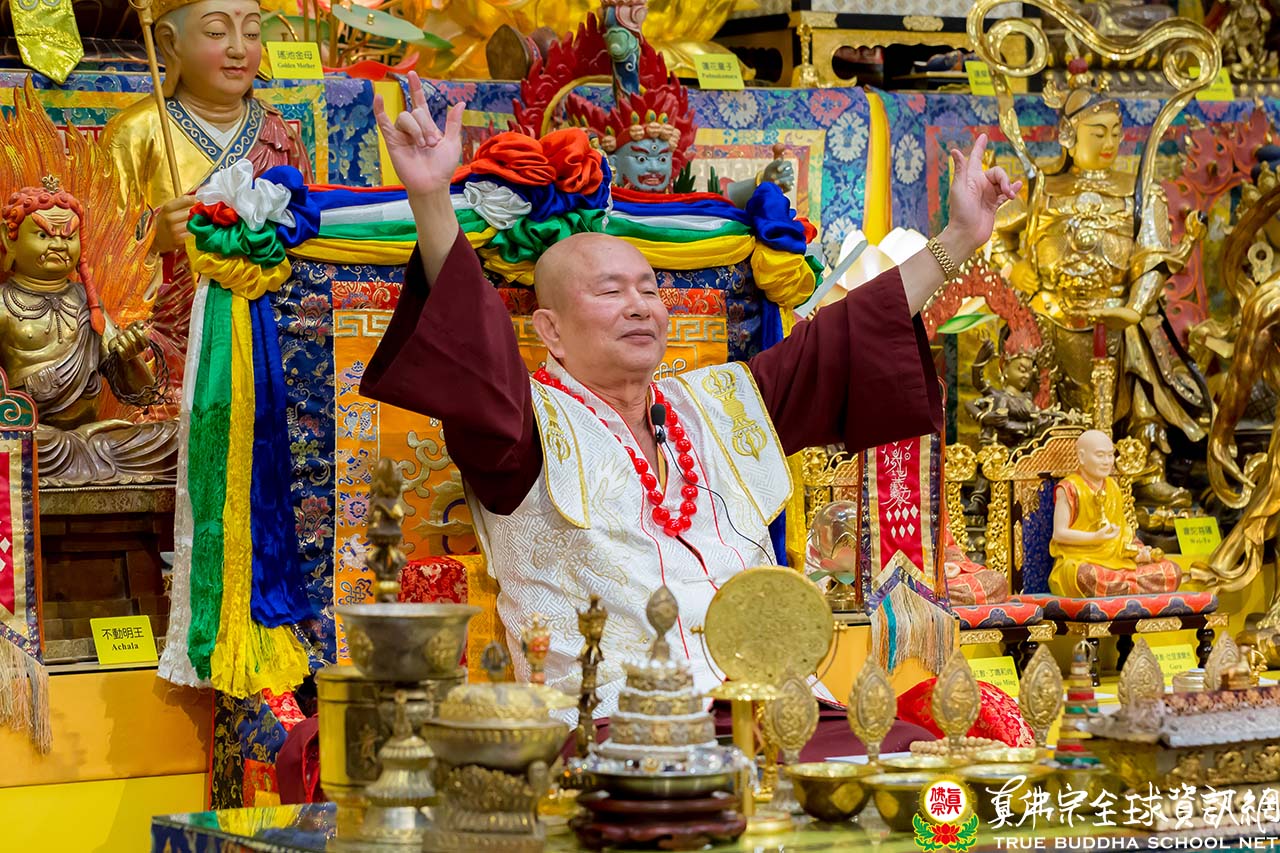 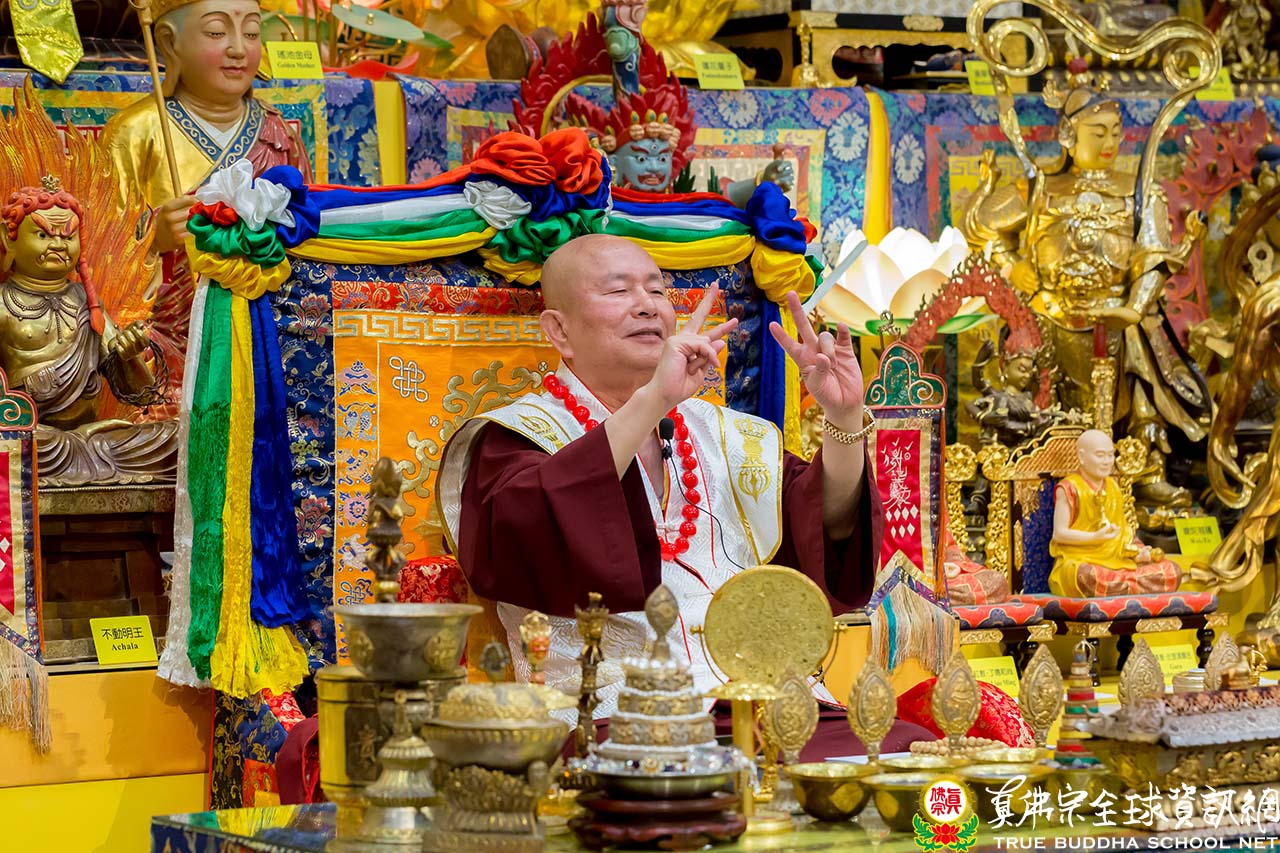 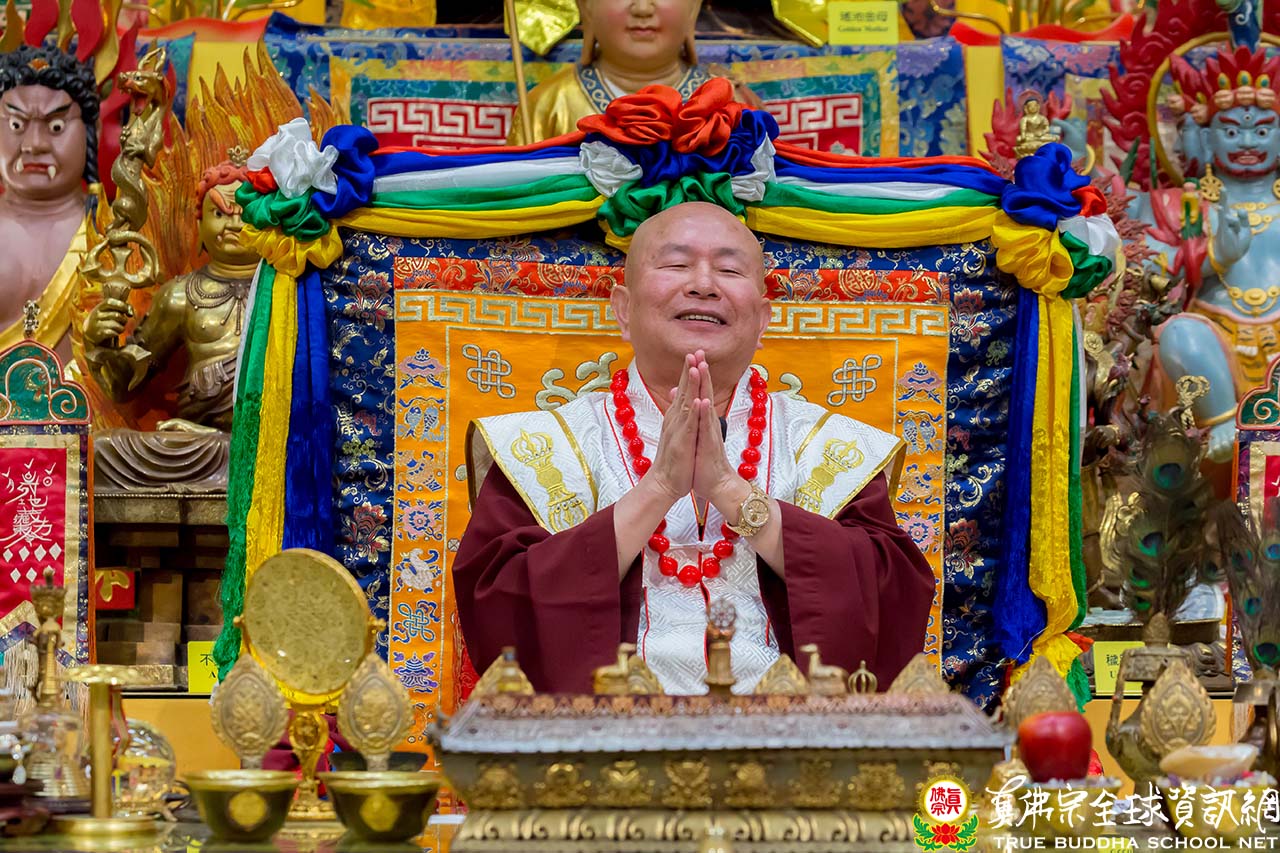 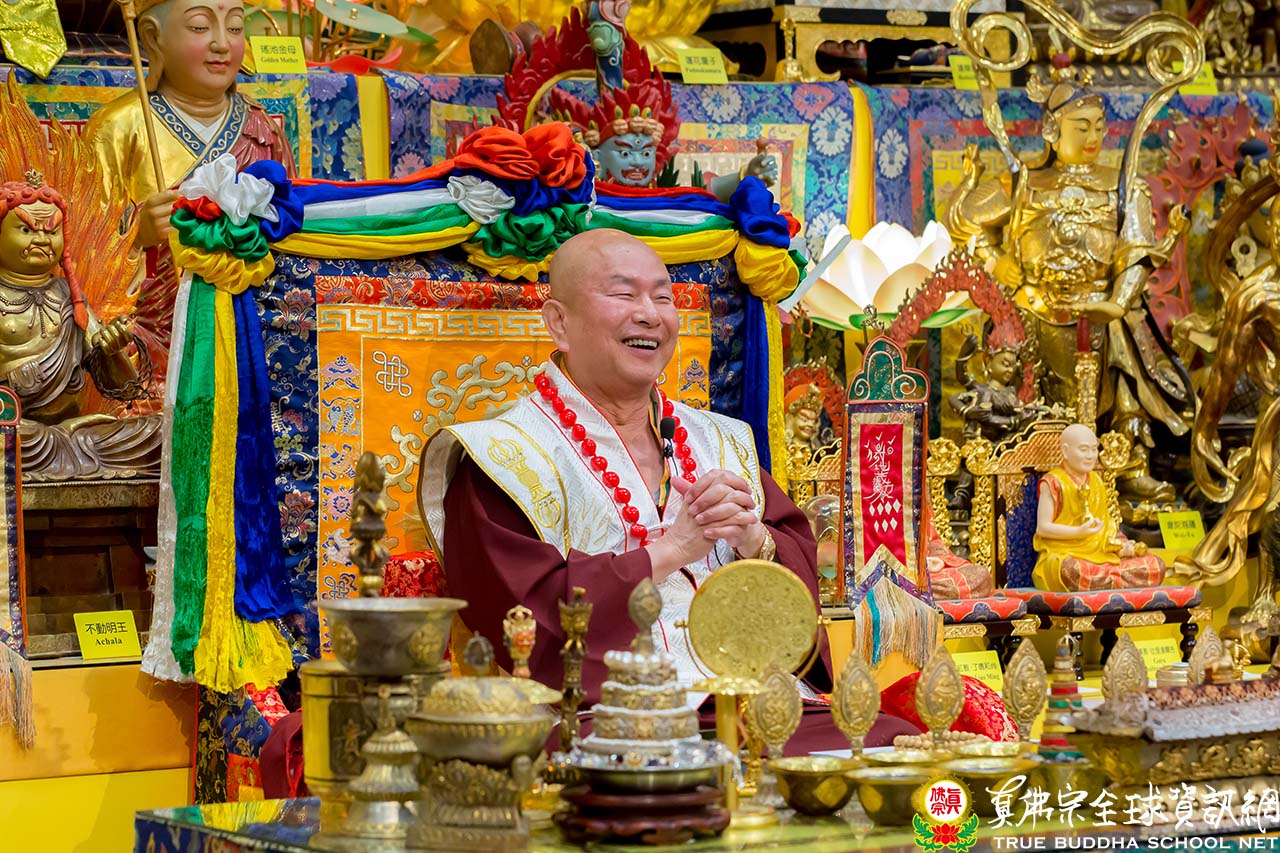 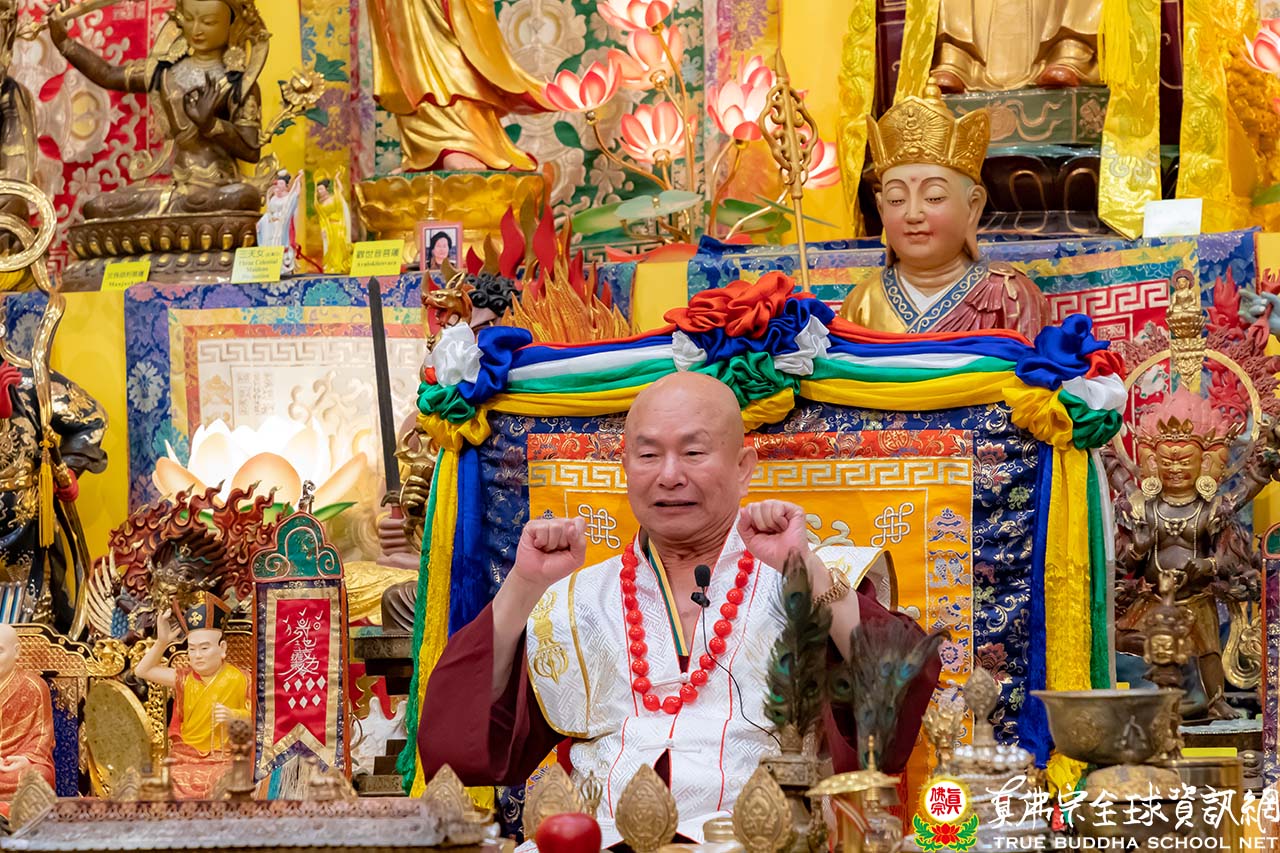 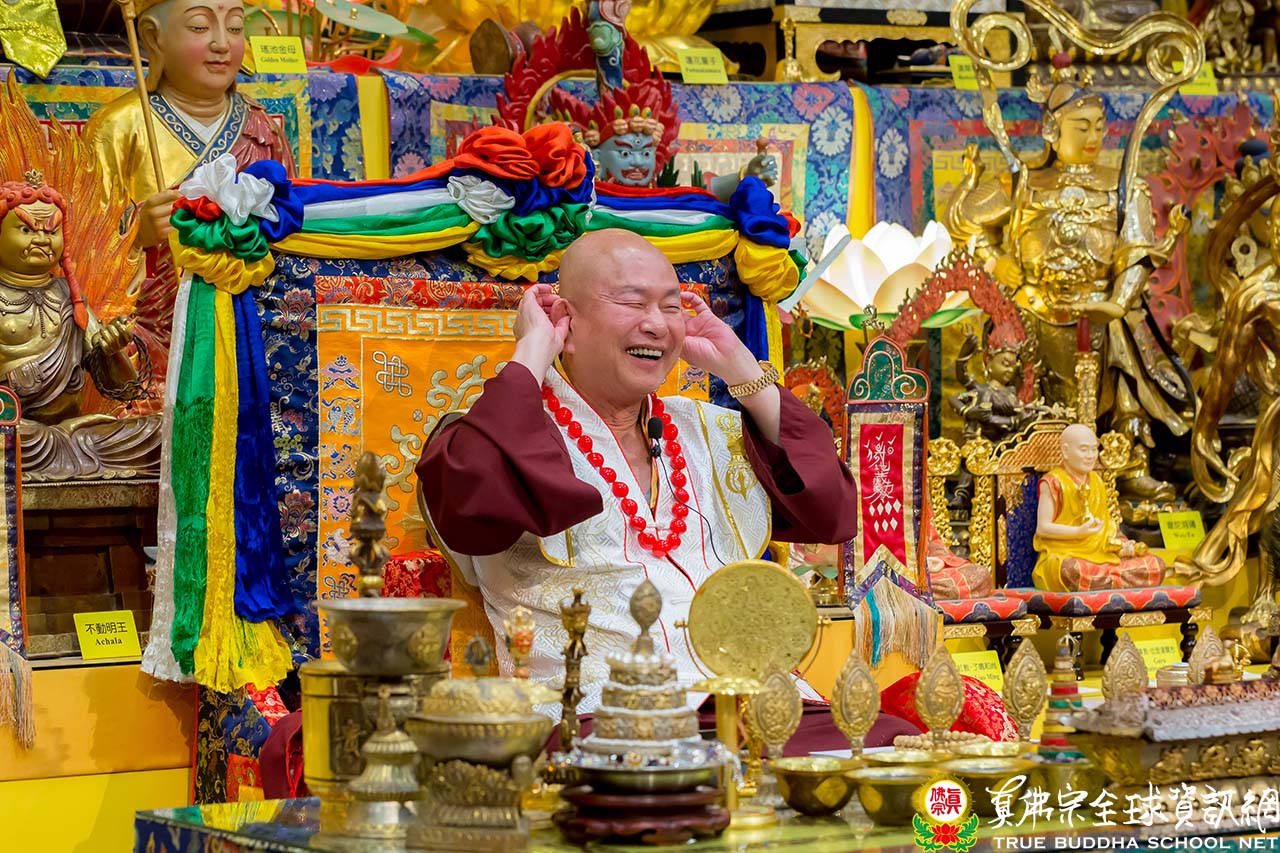 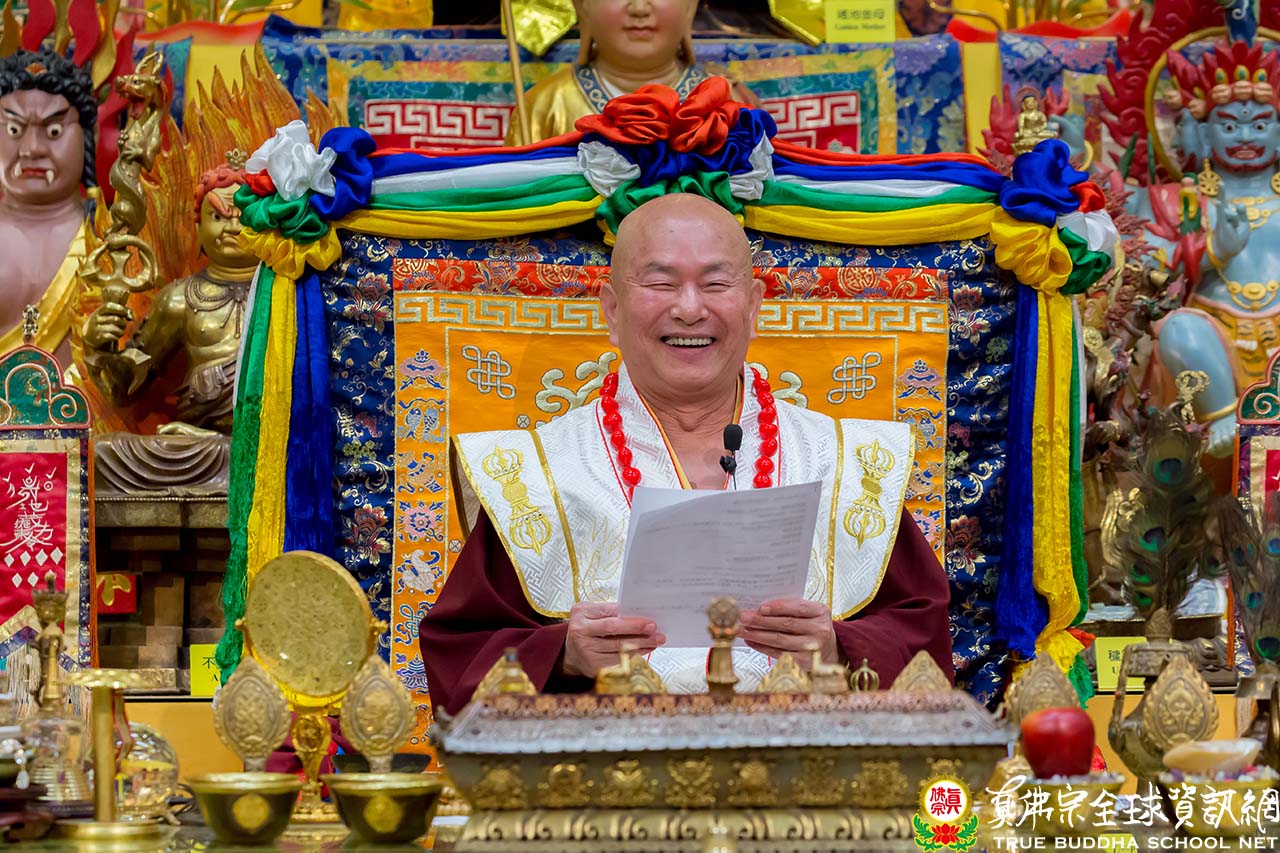 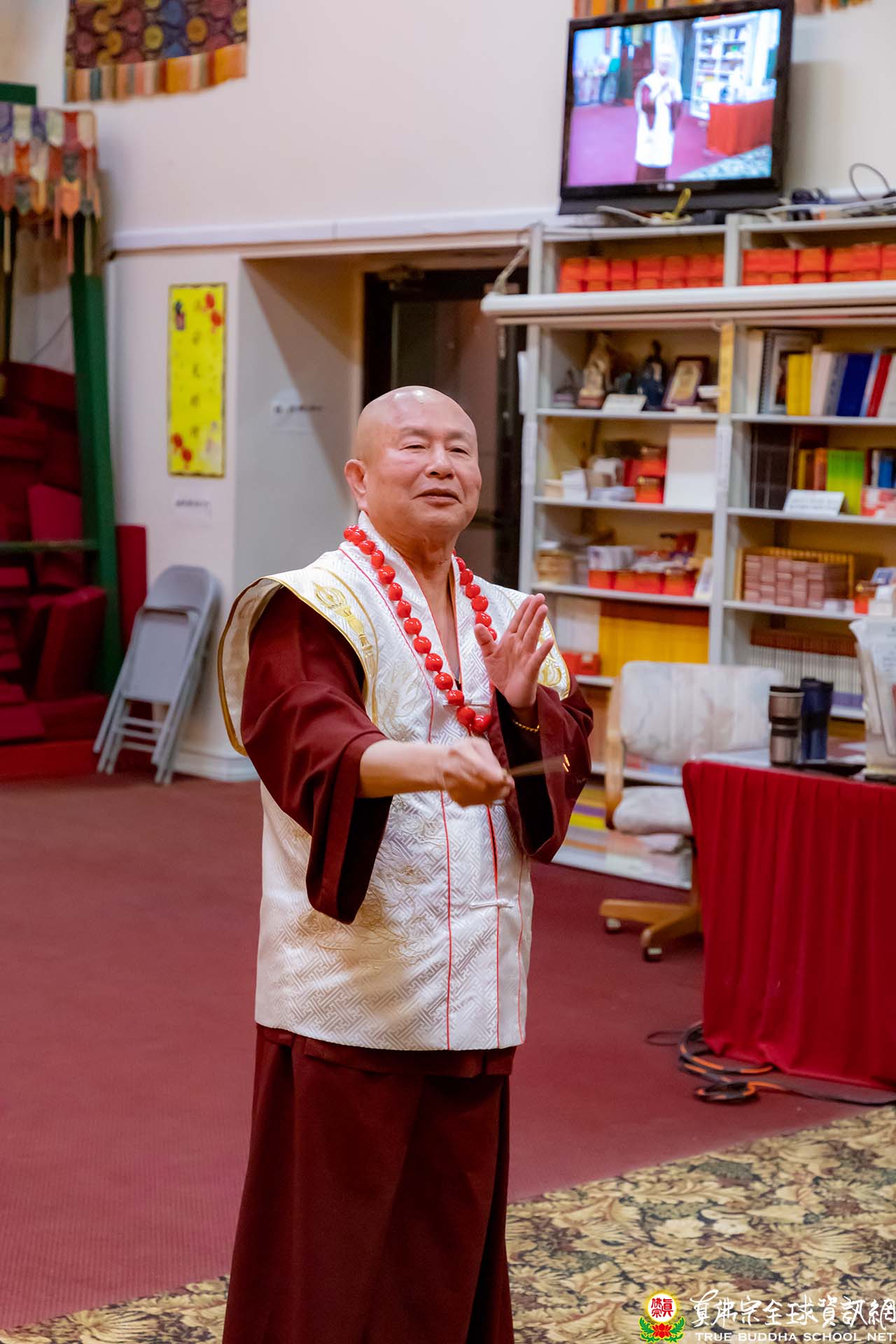 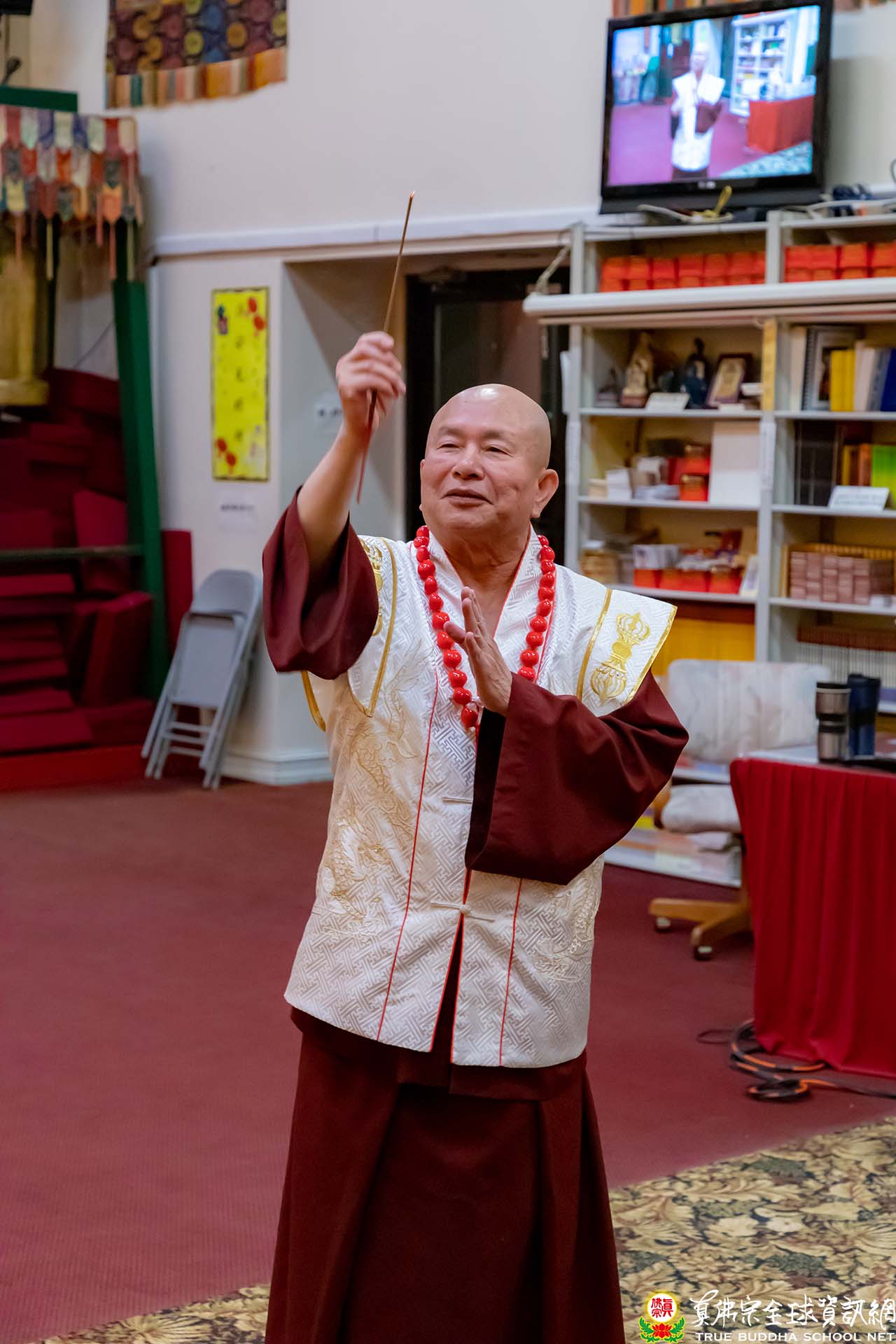 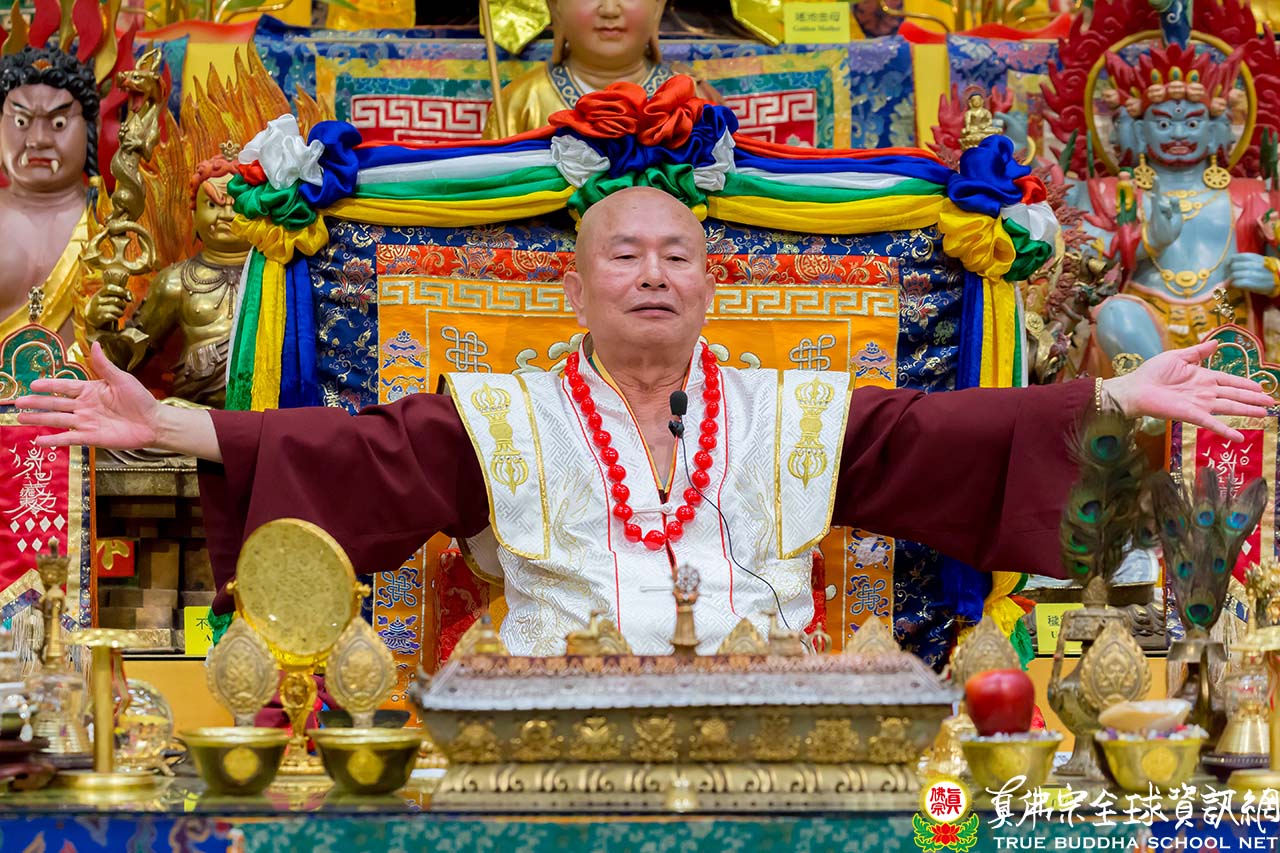 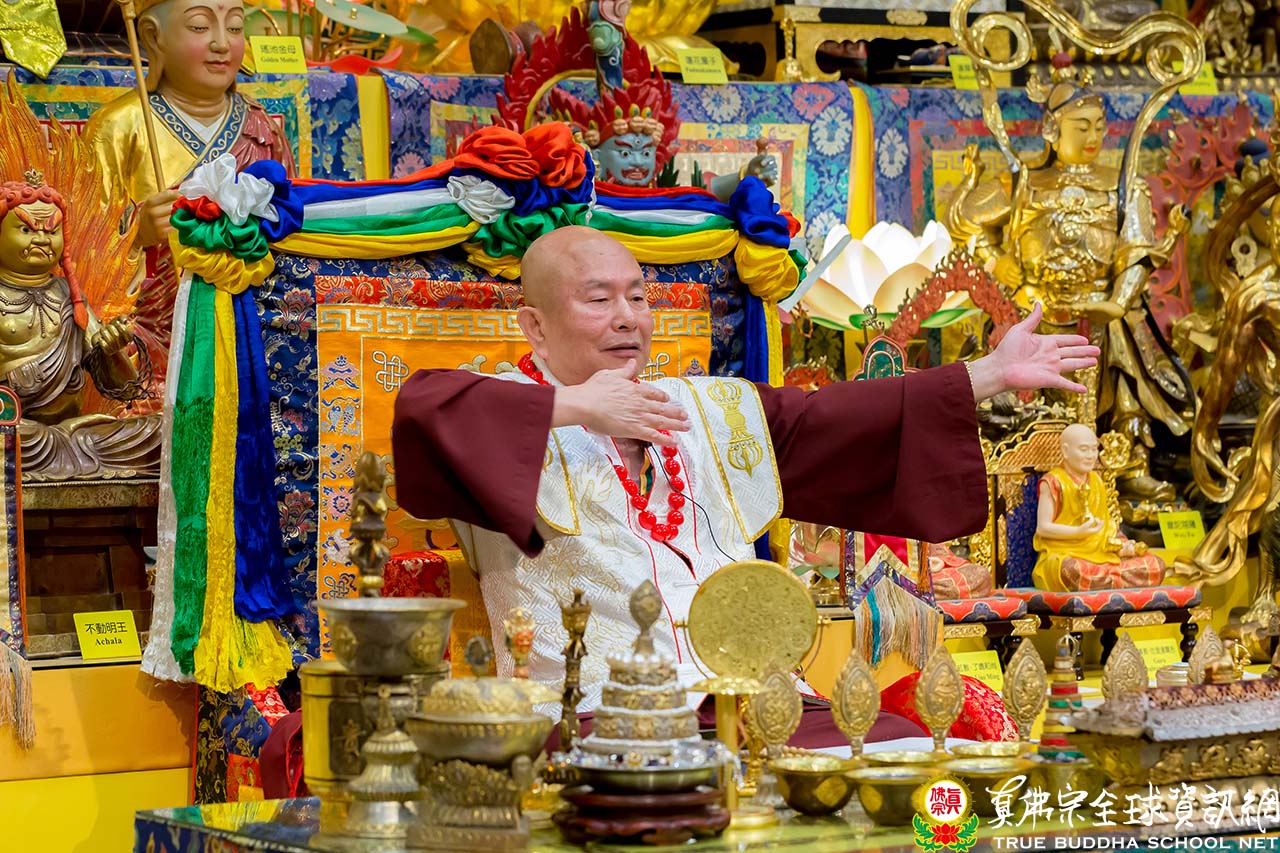 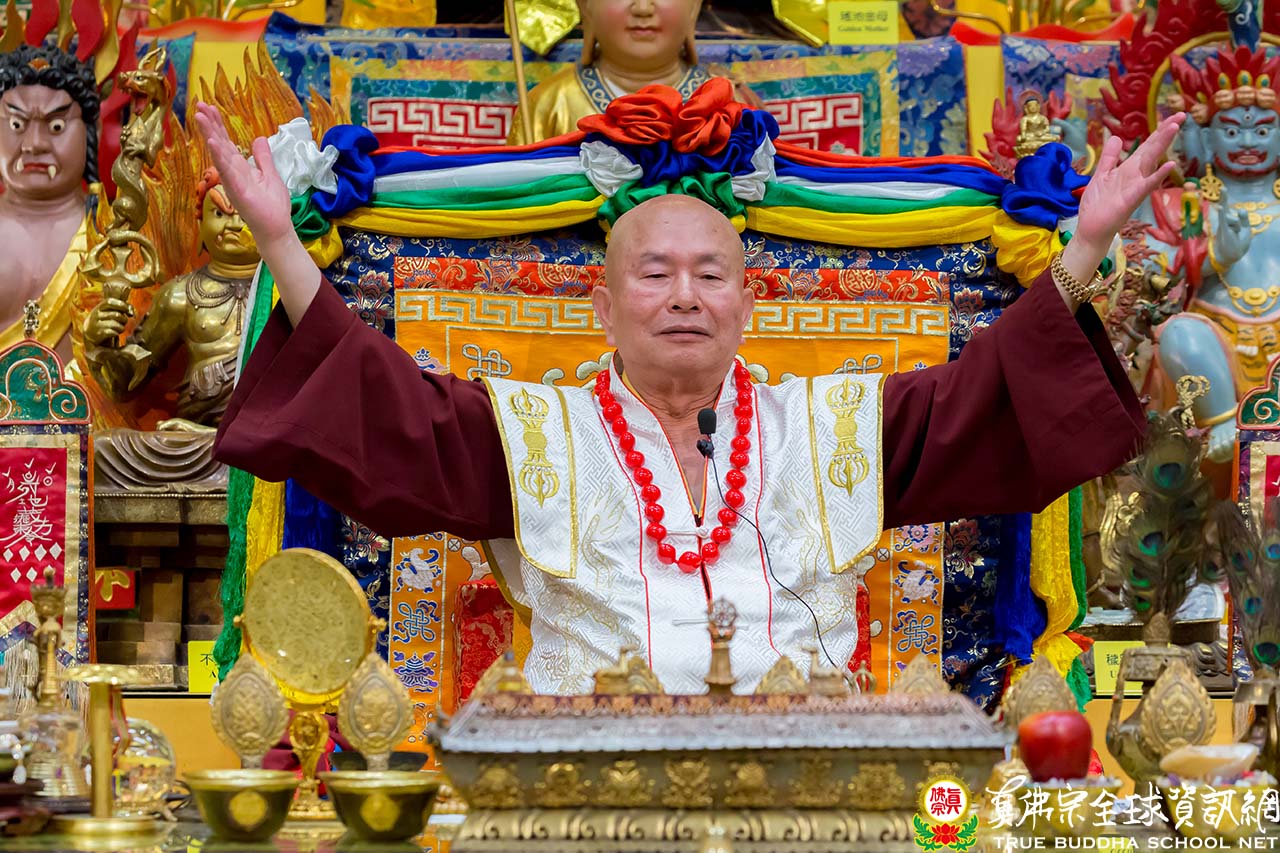 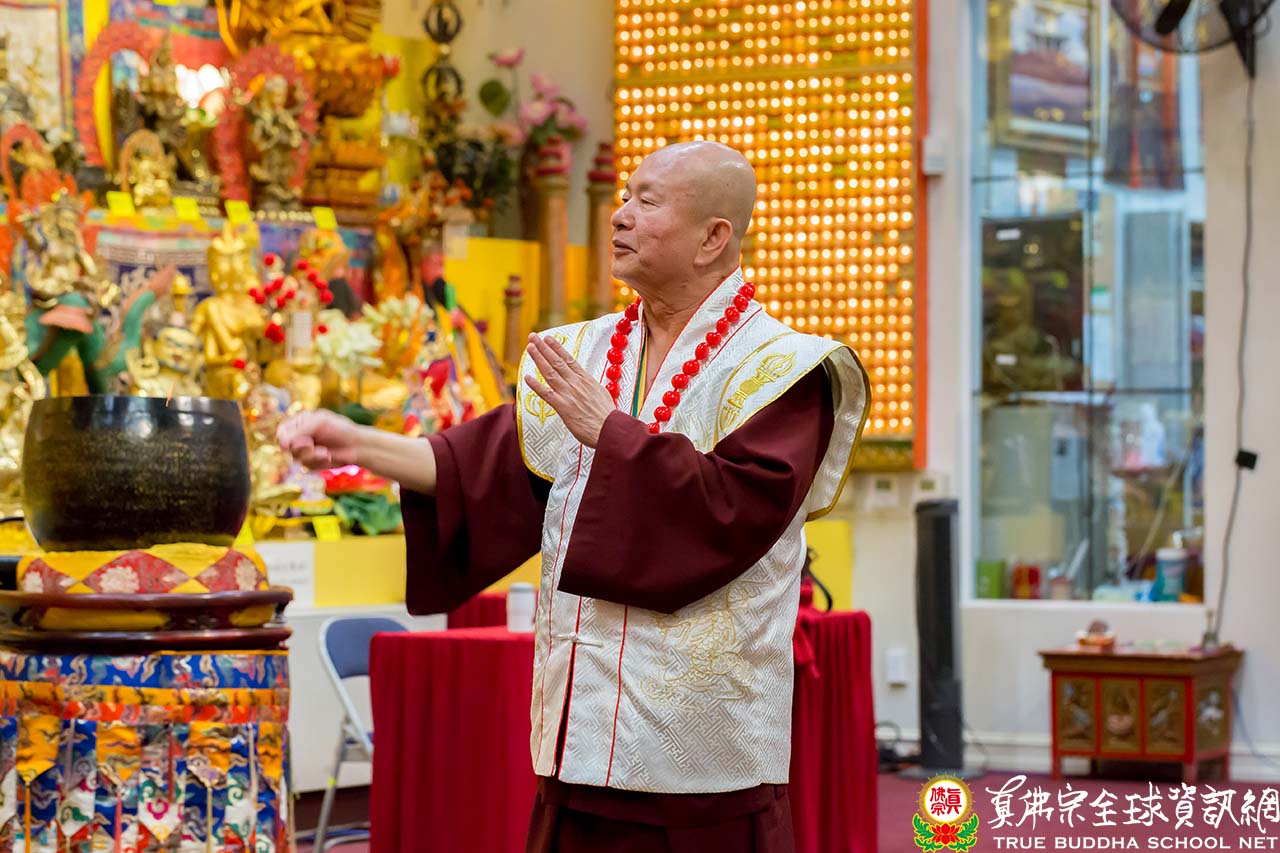