Seeing a Lotus Under Feet

Since first taking refuge in me, Lianhua Xuejun has liked to recite the True Buddha Sutra (<>The Sutra of Authentic Dharma that Removes Hindrances and Bestows Good Fortune). He believes that happiness lies in a life free from hindrances and disasters, and that peace and tranquility are life’s greatest blessings. For this reason, he is specially devoted to reciting the True Buddha Sutra.

Lianhua Xuejun not only recited the True Buddha Sutra on the 18th of each lunar month, he also recited it three times a day in the morning, afternoon, and evening. By following this routine, his recitations reached 90 per month and exceeded 1,000 per year.

Lianhua Xuejun faithfully followed this routine for three years. One day, as Lianhua Xuejun was opening the sutra for his daily recitation, he saw lotus flowers miraculously appear from the True Buddha Sutra. The lotuses manifested for about three seconds before they mysteriously disappeared.

Initially, Lianhua Xuejun thought his eyesight was playing tricks on him, so he didn’t give it much thought. However, with the passing of time, he saw lotuses appearing more and more frequently. After each appearance, lasting about three seconds, Lianhua Xuejun’s eyesight would return to normal; the sutra was still the sutra, and the lotus was gone.
At first, Lianhua Xuejun was scared. He thought maybe he was reciting the sutra improperly and had gone off the deep end. However, apart from seeing lotuses for three seconds, the rest of his daily life and work was perfectly normal. Over time, he managed to overcome his fears.

Lianhua Xuejun once attended the funeral of an elder where he noticed a lotus under his feet, indicating that he would be reborn in the Western Paradise. Upon further inquiry, Lianhua Xuejun discovered that this elder was a sincere Buddhist, who recited buddha’s epithet constantly, tread lightly, actively practiced alms-giving, and embraced loving kindness, compassion, joy, and equanimity.
(Following his cremation, countless sariras were found in his cremains).

On another occasion, Lianhua Xuejun attended the funeral of a different elder. This time, he didn’t see any lotuses beneath his feet. As it turned out, this elder had no religious beliefs. He indulged in drink, was lustful, and engaged in the business of pornography. As a triad leader in the local community, he had attacked and beaten people for not repaying their debts.
(No sariras were found in his body after cremation.)

Lianhua Xuejun didn’t dare to reveal his strange experiences to anyone, because he knew he would be shunned for the following reasons:
1. Distorted vision.
2. Possessed by a devil.
3. Insane.
4. Liar.

As for masters propagating the Dharma, he noticed the same situation; some did have a lotus while others did not. Whether there was a lotus or not, he kept Grandmaster’s teaching in mind that it’s hard to tell whether a practitioner is mundane or supramundane. Therefore, Lianhua Xuejun was never contemptuous of masters who did not have lotuses under their feet.

Finally, Lianhua Xuejun came to inform me about his experience of seeing a lotus under one’s feet by reciting the True Buddha Sutra.
“How about having a look at my feet?” I asked.
“I can’t seem to see any.” He was astounded as he stared at my feet.
“Look again,” I said.
“Oh Yes! Now, I can see a white lotus the size of a car wheel. And, that’s not all. On each side of the white lotus are a variety of smaller lotuses of different colors. What a truly magnificent sight!”

“What is the role of the small lotuses?” he asked curiously.
“They’re for carrying passengers,” I said.
“How is it possible for the lotuses under Grandmaster’s feet to intermittently appear and disappear ?” he asked.
“I am both mundane and supramundane,” I replied.

I told Lianhua Xuejun, “The countless, inconceivable worlds of the ten directions are a manifestation of one’s mind and consciousness. The True Buddha Tantric Dharma is as high as the mountains and as deep as the sea, and is the inconceivable Buddha-nature” 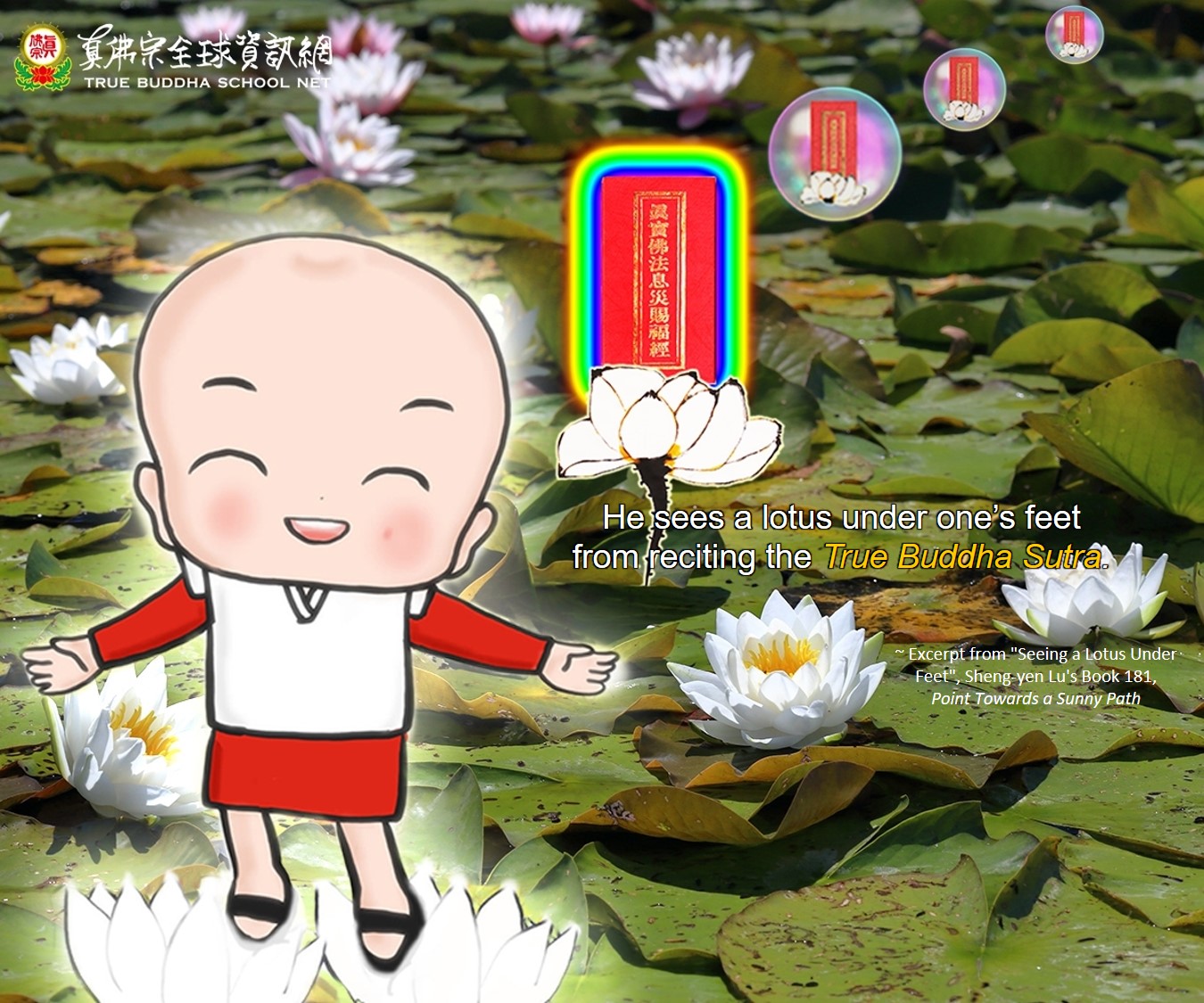