● Topic: An in-depth study of Buddhist scriptures to uncover the true meaning of Buddhadharma. The Lotus Sutra deserves close study and its principles should be upheld over one’s entire lifetime.

【Please see course content below for further details】
One may not know the great power and merit of the Lotus Sutra. One who upholds the Lotus Sutra will be blessed with longevity. In fact, Shakyamuni Buddha was clear empirical proof. He significantly extended his lifespan and swiftly accomplished Buddhahood as a result of hearing and upholding the Lotus Sutra. What is even more stunning is that the World Honored One prophesied that in future lifetimes, vast numbers of sentient beings who hear, recite and uphold the sutra just as he had would all attain Buddhahood!

One may not know that the Lotus Assembly at Vulture's Peak is actually still in progress. After a millennium, great masters and sages who had learned and upheld the Lotus Sutra entered into deep meditation where they could hear the resonating Dharma sound of the Buddha discoursing the vast, infinite, and absolute truth of the Lotus Sutra.

Listeners responded with enthusiasm to Ambassador Liao’s introduction of the Lotus Sutra in his first lecture of the Zhong Guan Humanities Lecture series. In these subsequent appearances, Ambassador Liao will continue his thorough review of the Lotus Sutra in a series of eight lectures. Attendees will embark on a journey filled with the essence of Dharma, be led through time and space, enter the Ling Jiou Mountain, and gather together in the presence of the Buddha.

Note: Due to COVID-19 safety measures, the lecture will adhere to the Real Name System, and will be accepting seminar registrations beginning today.

Note: Registration is not required for live webcast participants.

[A Brief Introduction of Speaker Ambassador Liao]
Ambassador Daniel T.C. Liao has served in diplomatic circles for 40 years. He began his study of Buddhism in 1999 by reading the Diamond Sutra. In 2008, due to predestined Dharma affinity when he was on a diplomatic mission in Seattle, he met Grandmaster Lu and began learning the True Buddha Tantric Dharma. In 2013, Ambassador Liao took refuge in Living Buddha Lian-sheng. As a TBS disciple, he honored the Root Guru, treasured the Dharma, practiced diligently, and ultimately gained tremendous benefits. In response to Grandmaster encouraging disciples to engage in wholehearted study of Buddhist scriptures, Ambassador Liao resolved to devote himself to learning key scriptures contained in the Chinese Buddhist Canon. While engaging in this in-depth research, Ambassador Liao authenticated Dharma teachings discoursed by Grandmaster over the years and reached an epiphany. This experience of personal growth greatly enhanced his spiritual cultivation and contributed significantly to his personal and professional life. Ambassador Liao hopes to share his Dharma joy and the knowledge he has gained with fellow disciples. 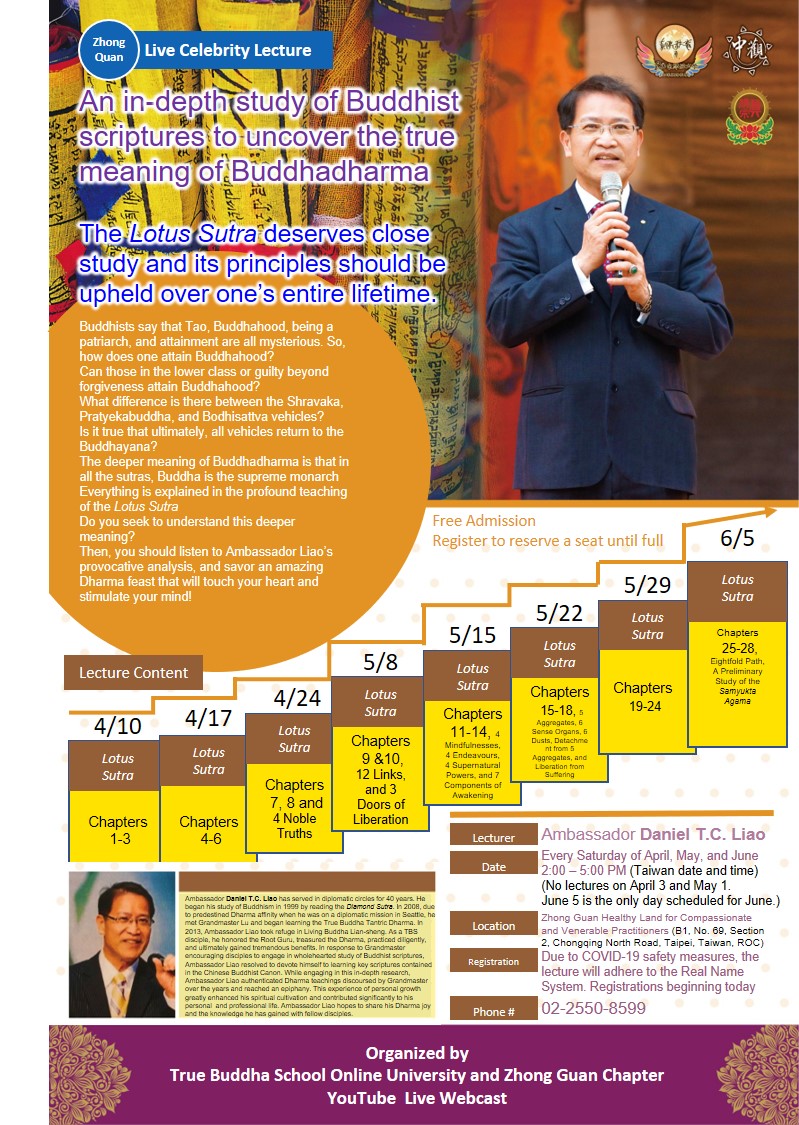