Key Points of Grandmaster's Discourse on Sangharama Bodhisattva
Sangharama Bodhisattva is greatly venerated among the Chinese people and is actually one and the same as ''Guan Sheng Di Jun.'' [Holy Emperor Deity Guan]
Along with Guanyin and Mazu, Guan Sheng Di Jun (Guan Di) is commonly found in Chinese shops, restaurants, and residences, where he is worshipped and considered a significant and sacred venerable.
Guan Di is regarded as a symbol of loyalty and righteousness. Towards his country, he demonstrates loyalty. Towards his friends and all sentient beings, he practices righteousness. He is indeed a mighty bodhisattva and sacred figure.
How did Guan Di become a dharma protector of Buddhism? In ancient China, while in meditation, a great master (Sramana Zhiyi of the Tientai Sect, according to legend) saw Guan Di (Guan Yunchang) leading a host of netherworld soldiers on the battlefield. The great master then taught the Buddhadharma to Guan Di. As a result, Guan Di took refuge in Buddhism and became known as Sangharama Bodhisattva.
Sangharama Bodhisattva is a temple deity who protects Buddhist temples. His magnificent and influential spirituality make him a divine and highly significant being. Sangharama Bodhisattva is, in fact, the protector of Rainbow Villa.

◎Sangharama Bodhisattva is regarded as a wealth deity by the Cantonese and is commonly found and worshipped in almost every shop in Canton. Sangharama Bodhisattva is regarded as a wealth deity because, by keeping evil spirits away, he brings blessings in. Therefore, those who seek wealth can consult Guan Di instead of me. Since Guan Di is a wealth deity, a guardian of families, and a protector of Buddhadharma, everyone should try to be a main supplicant.
When I was spiritually travelling, Sangharama Bodhisattva gave me three teachings for the people of this world:
May virtuous people often be reborn in this world.
May human beings often perform virtuous deeds.
May human beings often practice virtuous speech.
I asked Sangharama Bodhisattva, ''For what reason do you give an edict for these three virtues?''
Sangharama Bodhisattva replied, ''Presently, as the world is full of resentment and anger, good people are reluctant to descend to saha world as they may be harmed by evildoers. Nowadays, those who perform good deeds are few whereas those who commit evil are many. The only way to change this unfortunate situation is to encourage people to perform good deeds more frequently.
''In particular, people in today's world often lie, slander, use abusive language, and speak lasciviously. Encouraging people to engage in good and virtuous speech, especially in the form of praise and compliments, will inspire them to be more kind. This world will then still stand a chance to be saved.''
I can truly appreciate the good intentions of Sangharama Bodhisattva. Guan Di extremely loyal and righteous, and also exceedingly compassionate. He feels happy when people are good and kind. The buddhas recognize his efforts and praise him as Lord of Heaven (Heaven Emperor) and even further as Sangharama Bodhisattva. People should awaken and contemplate on the three virtues pointed out by Sangharama Bodhisattva.
One who gains the protection of Sangharama Bodhisattva will not become evil or enter the three evil paths. In order to gain his protection, one must cultivate his practice.
Visualization: one may visualize Sangharama Bodhisattva in the company of a Red Rabbit Horse. He carries a Blue-green Dragon Scimitar. In his image, Sangharama Bodhisattva is depicted as holding and reading the Spring and Autumn Annals.
Mantra: ''Om。qie-lan。sid-dhi。hum。''
Seed syllable : Hum (blue)
Mudra: Vajra Mudra
The elements of visualization, mantra and mudra constitute a sadhana for practice.

Key Points of Grandmaster's Discourse on Skanda Bodhisattva
When visiting a temple in China, upon entering the first heavenly gate, the first statues one sees are usually the Four Heavenly Kings. Maitreya Buddha (the future buddha) is directly facing the Four Heavenly Kings. Beyond the first heavenly gate, upon turning around, one will see Skanda, who always faces the main hall of the temple. Sakyamuni Buddha, Medicine Buddha and Amitabha Buddha are found in the main hall.
In temples in Taiwan, on the other hand, one will usually find the two great dharma protectors Skanda and Sangharama Bodhisattva (neat and tidy.)
What is the Greatness of Skanda?
Skanda is Rudita Buddha.
Among the thousands of future buddhas of the Auspicious Aeon, the first buddha of the first thousand buddhas is Lotus Light Buddha. The first buddha of the second thousand buddhas is Rudita Buddha. Most people do not know who Rudita Buddha is, but he is none other than Skanda. Maitreya Buddha is the first of the third thousand buddhas. Not every dharma protecting deity has attained Buddhahood. Skanda is highly venerated as he is one of the leaders of the three thousand future buddhas.
Sakyamuni Buddha, Medicine Buddha, Amitabha Buddha, all buddhas of the ten directions and three times, and the main hall itself are all protected by Skanda. The pure lands are all within his reach. Skanda possesses a distinguished and powerful background and will become Rudita Buddha in the future. He is the greatest buddha.
Skanda is Foremost in Supernatural Travel
Long ago, in Kushinagar, after Sakyamuni entered nirvana under a sal tree and was cremated, a large number of relics appeared. At that very moment, a ghost monster by the name of Non-human came and stole Sakyamuni's relics. Known as ''fast moving evil spirits,'' these non-humans are able to travel at great speed. Just as the relics were being stolen, Dharma Protector Skanda appeared. Skanda caught the speedy monster and retrieved Shakyamuni's relics. Due to the efforts of Skanda, Sakyamuni's relics still remain and can be seen by devas and humans in the present day.

Skanda is the Overseer of Buddhism
Buddhists in the Han region are all familiar with Skanda. As long as one is a main supplicant of his ceremony, all one's undertakings will proceed smoothly. So long as one has affinity and prays to Skanda, all one's undertakings will be successful no matter which Buddhist door one enters. Skanda is the Director Of General Affairs of all the buddha pure lands and everything is under his authority. Therefore, as long as one has affinity with Skanda, all one need do is let Skanda know which pure land one wishes to be reborn into and he will help arrange it.
Skanda is Foremost in Apprehending Demons
According to The Biography of Jigong, while trying to apprehend demons, Jigong carried a statue of Skanda out from a temple on his shoulders and placed it in the household garden of a wealthy man. Evil spirits came and saw Skanda's demon subjugating sceptre. When his sceptre radiated light they were immediately trapped underneath it. Skanda then trampled the evil spirits beneath his feet. As a result, the evil spirits were never able to make an appearance. Skanda is considered foremost in apprehending evil spirits. (I am only making a brief introduction here.)
Skanda Is Capable of Everything
One can pray to Skanda for:
Good health and wish fulfillment.
Deliverance of netherworld spirits to the pure land of Buddha.
Emitting blessing light to increase one's wisdom and prosperity, and to attain love and respect.
Banishing all enemies and driving away karmic creditors with his demon subjugating sceptre.
The essential elements of the Skanda Sadhana are:
Image: Skanda holds a demon subjugating sceptre in his hand.
Seed syllable: Hum (blue).
Mudra: Vajra Mudra
Mantra: ''Om。 wei-tuo-tian-duo。ma-ha-tian-duo。 so-ha。'' 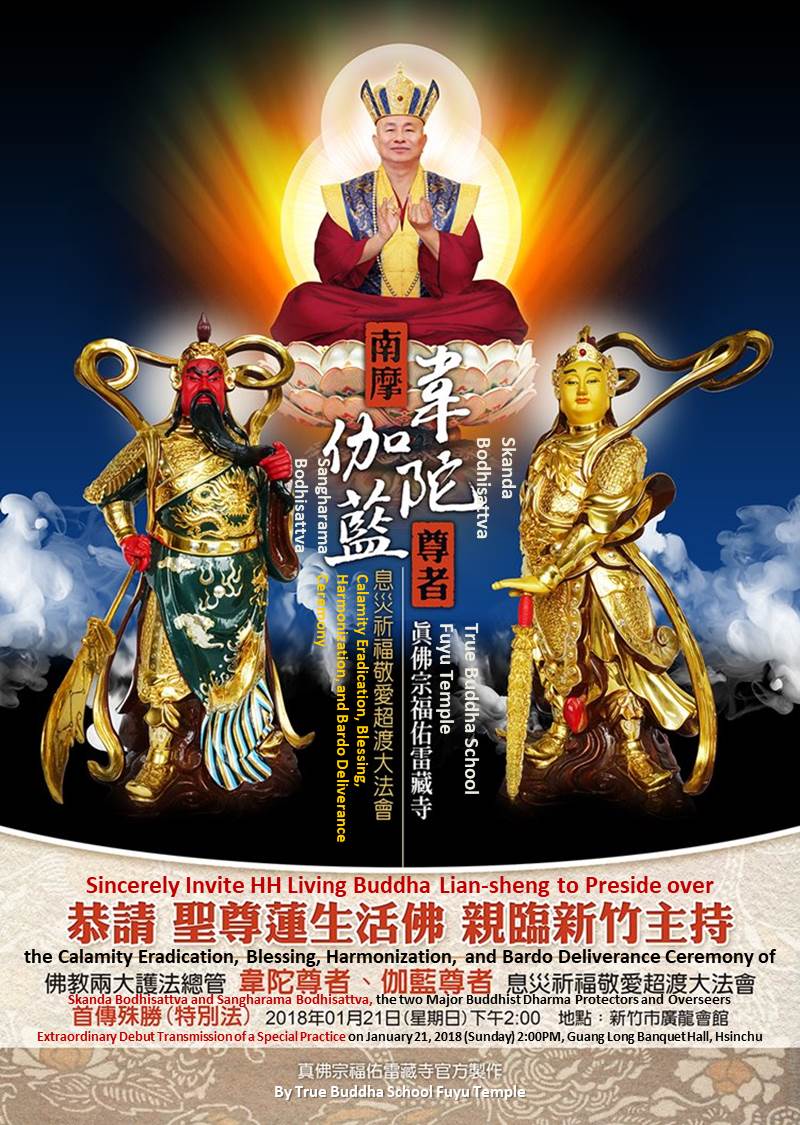