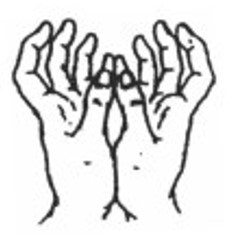 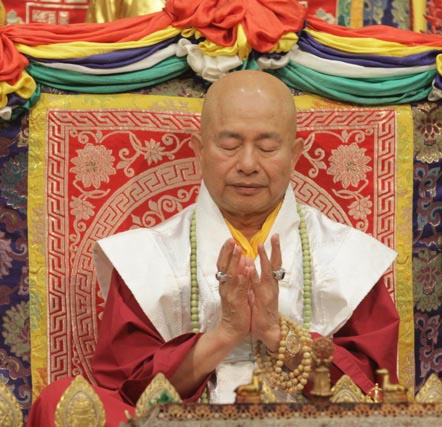 Place palms together. Open the palms as an open lotus keeping the thumbs touching together while the little fingers are also kept touching each other. Place the mudra in front of the chest. 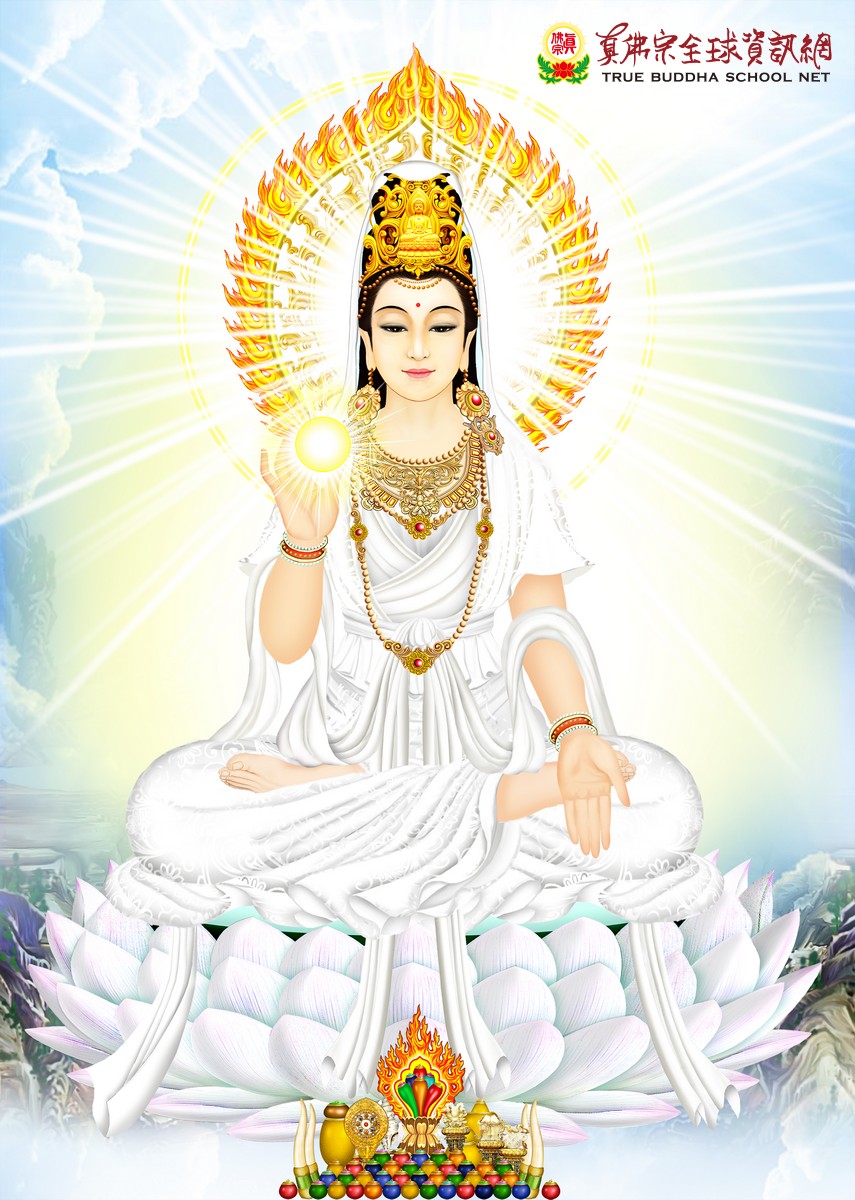 【Living Buddha Lian-sheng Sheng-yen Lu Dharma Talk - White-robed Wish-fulfilling Crystal Ball Guanyin Background and Key Cultivation Formula】
White-robed Mahasattva is one of the many emanations of Guanyin Bodhisattva. Among these emanations, the one whose left hand forms the Wish-fulfilling Mudra and right hand holds a crystal ball is namely the Presiding Consort of Lotus Mother of Samadhi mentioned in the Bodhi Cultivation Venue One Syllable Crown Chakra Sutra.

If one seeks a wish-fulfilling practice, one can cultivate the Wish-fulfilling Crystal Ball White-robed Mahasattva Practice. By cultivating this practice for just one month, one will receive great riches and good fortune.

If one wishes a sick person to get better, then one visualizes the sick person getting up out of bed and performing Taichi to demonstrate that he's back in good shape and healthy again.

If one wishes that a person will be delivered to rebirth in the pure land, then visualize that person riding a lotus and ascending all the way up to heaven. This is a deliverance practice.

Therefore, this is a practice which can not only eradicate calamities and enrich wealth, but also subjugate and increase love and respect.

At the conclusion of one's visualization, one recites the White-robed Guanyin mantra 108 times. One may recite 21 times, or 49 times.

The key cultivation formula is one's concentration. One must concentrate, visualizing with total concentration. It is of utmost importance that one enters samadhi immediately after one finishes reciting the mantra.

This practice is easy to perform and easy to achieve spiritual union. After a long period of practice, one will be profoundly blessed by the white-yellow light radiated by White-robed Guanyin. This white-yellow light can change one's fate from poverty to wealth, from destitution to royalty. Fame and fortune will all appear. When one's death approaches, one will be reborn in the pure land.

Guanyin listens with her eyes. The Chinese characters for Guanyin are ''Guan-shi-yin.'' The first character means to ''observe.'' The last two characters mean ''sounds of the world.'' This means she ''observes'' rather than ''listens to'' the sounds of the world. It is because Guanyin has immense supernatural power and infinite compassion that she saves sentient beings without leaving a single being behind. This is the magnificence of this bodhisattva.

This White-robed Guanyin Wish-fulfilling Crystal Ball Practice was obtained by me, the Holy Red Crown Vajra Master, when I entered the samadhi of the White Robed Mahasattva. It is thus extraordinarily precious. The cultivation of this practice is really quite simple, but if I didn't write it down in a book, no one could ever know the ''supreme secret'' within it.

White-robed Guanyin is one of the many emanations of Guanyin. Her appearance is absolutely dignified and compassionate. Just seeing her will engender in one a mind of love and respect. She wears a white robe and is adorned with pearls and jewels.

Lunar calendar Feb. 29th is her birthday; June 19th, the anniversary of her attainment of Buddhahood; and Sept. 19th, the anniversary of her ordination. This bodhisattva cares the most deeply about all sentient beings and takes the greatest happiness in helping sentient beings when they are in difficulty. If one cultivates the White-robed Guanyin Wish-fulfilling Crystal Ball Practice on the above mentioned three dates one is certain to obtain auspicious and wish-fulfilling results.