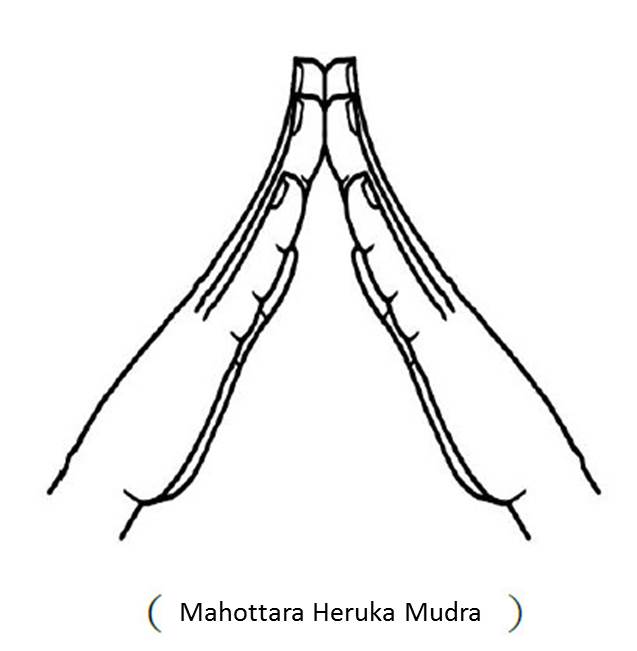 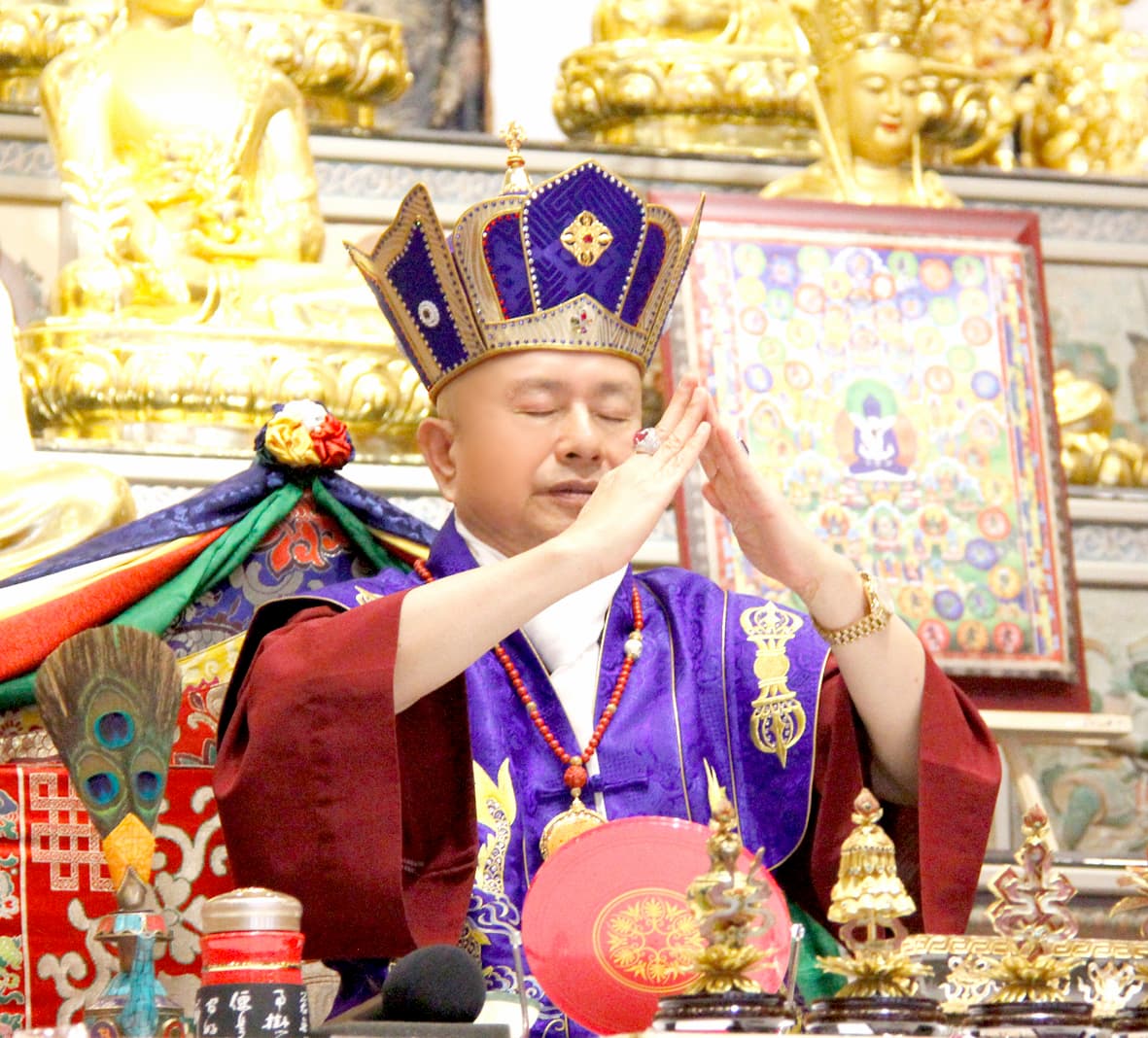 Put your palms together. Open the lower part of the palms while keeping the tips of the middle three fingers touching. 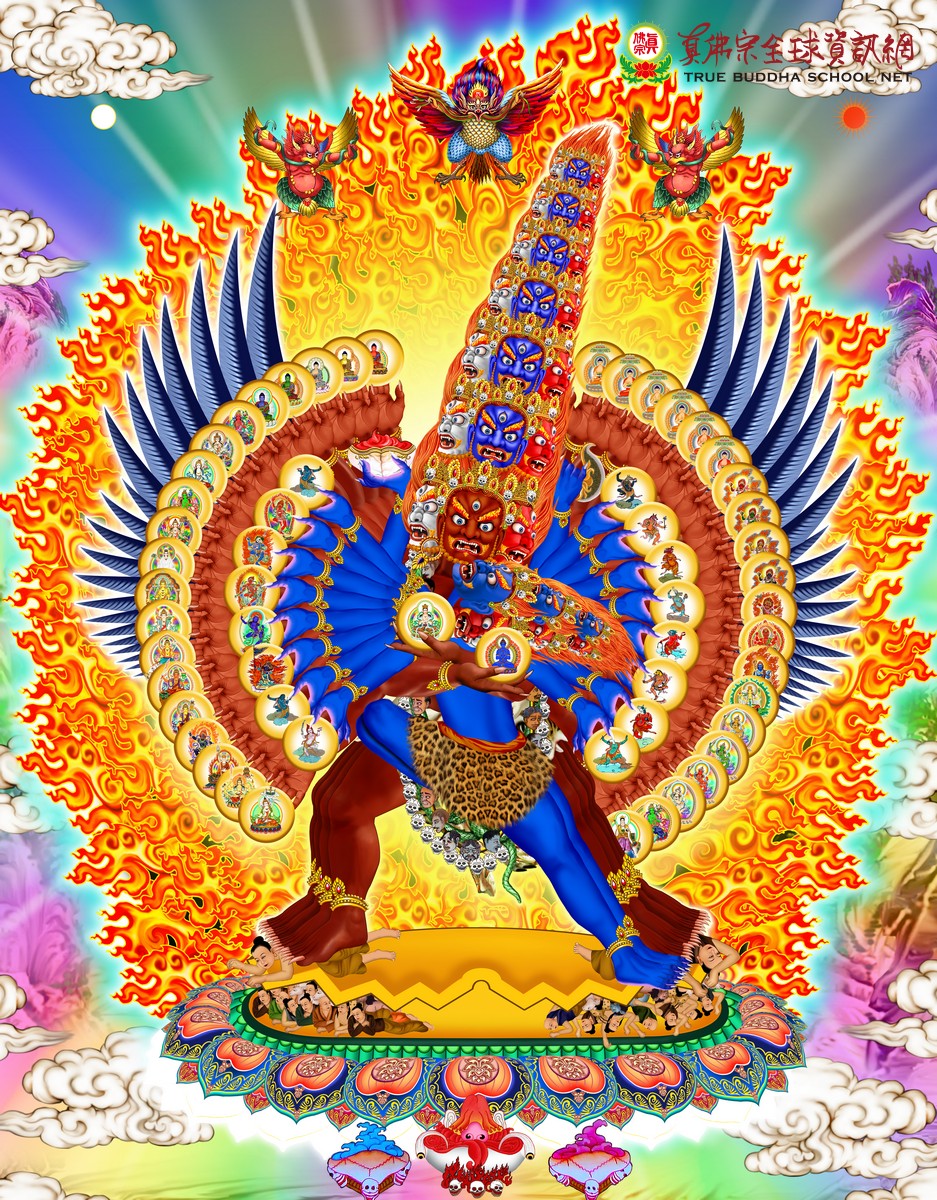 Mahottara Heruka emanates from the Primordial Buddha. He has 21 faces, 42 arms and eight legs. Mahottara is holding 42 bright mirrors in his 42 hands showing all 42 peaceful deities. The 42 peaceful deities include the Primordial Buddha, the Mahesvara Buddha Mother, the Five Buddhas, the Five Buddha Mothers, the Eight Major Bodhisattvas, the Eight Major Bodhisattvas' consorts, the Four Wisdom Kings, the Four Wisdom Kings' consorts, and the Six Munis. Mahottara Buddha Mother has nine faces, 18 arms and four legs. Two of her hands hold a kartika and a skull-cup. The rest of her hands each hold a bright mirror. She appears in wrathful form with a beast face.

【Living Buddha Lian-sheng Sheng-yen Lu Dharma Talk - Mahottara Heruka Background and Magnificence】
Mahottara emanates from the Primordial Buddha and is also called the Whole Body Clairvoyant Eyes Vajra. His image has 21 faces, 42 arms, and eight feet. The Buddha Mother has nine faces,18 arms and four feet. She holds a mirror in each of her hands with 42 peaceful deities appearing in the mirrors. The tathagatas of the five sections are included among these 42 deities along with Five Buddha Mothers, Eight Great Bodhisattvas, Eight Great Buddha Mothers, Four Wisdom Kings, the Four Wisdom Kings' consorts, Six Munis, the Primordial Buddha and Mahesvara Buddha Mother. There are 42 deities altogether, referred to as peaceful deities. In addition, there are 58 wrathful deities. This makes a total of 100 deities, referred to as the 100 Peaceful and Wrathful Deities.

The top part of Mahottara's symbol is a circle with a dot inside. The dot, which symbolizes the totality of all buddhas, represents the Primordial Buddha. The lower part of the symbol looks like ''川, chuan.'' This ''chuan'' symbolizes the net of great illusion and all of manifestation.

In addition, I teach Perfect Dharma Characters, the Tantra of Mind, Endless Vows and Infinite Illusory Bodies, and the Great Meritorious Net of Illusion.

What is the fundamental meaning of Mahottara? Transformation from the original state to myriad phenomena and returning from myriad phenomena to the original state. This is truly extraordinary. Why is it this way? All practitioners cultivate to return from myriad phenomena to the original state. Today, whether you are practicing Buddhadharma, Taoism, or Vajrayana, you are returning from the myriad to one, from one to zero, and from zero to buddha unified with the path. What is the human world? The human world is actually a total illusion. All phenomena are illusions. By cultivating back to the primordial state, one can attain the three bodies. This is the key secret accomplishment resulting from practicing Mahottara. We, humans, are meant to cultivate to return to the primordial buddha Adharma and Mahottara.

Mahottara's mudra represents ''川.'' (''chuan,'' a Chinese character.) However, when you form the mudra, your fingers are together whereas the three strokes of ''川'' are separated. Now we have his mudra, his image, and his mantra ''Om。bie-zha。zhuo-da。Ma-ha-seh。xi-li。he-ru-ka。hum-pei。''

I have revealed the key formula of this practice. The combination of his mudra, image, and mantra establishes the Mahottara sadhana. By realizing that this mundane world is totally illusory and all phenomena are a net of illusion, I was enlightened to my buddha nature. The profound principle of understanding one's own mind and seeing the Buddha-nature lies in this realization: the truth is, there is nothing to gain in this world.

Mahottara has eyes all over his body. For this reason, he is also called Whole Body Clairvoyant Eyes. One practices by visualizing an eye at the crown chakra and root chakra respectively. While looking at each other, these two eyes see one's central channel. Next, visualize an eye at each ear and the eyes are looking at each other. One then visualizes one's body being eyes everywhere. There are eyes from head to foot. There is an eye at each shoulder and these eyes look at each other. There is an eye on the sole of each foot, on each knee, and even on each kidney. These pairs of eyes are all looking at each other. Eventually, there are eyes all over the body looking at each other. When light manifests within the heart, all these eyes will radiate light and one will be able to see the entire universe and all worlds. Everything from the most minute to the entire cosmos will be revealed to one's sight. This is Whole Body Clairvoyant Eyes Vajra who is namely Mahottara.

Through this practice, one's body is transformed into eyes. There is an eye in every pore radiating light. As the light shines, one can see internally into one's body on the microscale and everywhere throughout the entire universe on the macroscale. This is how to cultivate Great Perfection Whole Body Clairvoyant Eyes which is part of Mahottara Practice.

The ten eyes are all looking at each other. When one is able to guide the light of the vajra chains and prajna light into the heart chakra, one will be able to see light. This uses the method of ''squeezing,'' like squeezing toothpaste from a tube. This is true cultivation.

One guides the light produced in one's heart throughout one's body, completely illuminating the ten wisdom eyes with the light of the vajra chains. All the lights intertwine to form a net with lights shooting back and forth. Lights are colliding, pushing, and pulling while they interactively and mutually excite each other. One must first of all master this. Afterwards, one transforms all one's skin pores into wisdom eyes so that each individual skin pore looks like an eye. When the light in the heart radiates through the skin pores one attains Whole Body Clairvoyant Eyes. The entire body is transformed into eyes radiating light.

At the moment of attainment of Whole Body Clairvoyant Eyes, one's entire body is eyes and light. One manifests the form of the Infinite Light Tathagata. Infinite numbers of principal deities, dakinis, dakas, and dharma protectors emerge from this infinite, boundless light. The absolute eternal light of supreme attainment, which is namely the buddha light or the Tathagata light, manifests in one's body.

Mahottara contains 100 peaceful and wrathful deities. Under the guidance of Mahottara, the 100 peaceful and wrathful deities appear at the end of one's life to guide one to rebirth in the pure land. It's quite simple and one must remember this. When one's life is about to end, one will see the appearance of an intensely brilliant light. This light is the primordial light, the light of the primordial Buddha-nature, and is actually one's own Buddha-nature. One merges with this light. There will be two opportunities to see this light. If one misses these opportunities, one must wait for the next opportunity which is the appearance of a deity who is either peaceful, wrathful, or equal parts peaceful and wrathful. In other words, this third opportunity is the appearance of one's principal deity. One merges with the principal deity. The fourth opportunity is to merge with the dharma protector when he appears. After this, there is just one more opportunity. This is the appearance of the wrathful and smiling principal deity. If one misses this fifth opportunity, one will not be reborn in the pure land but will reincarnate in the six realms instead.

This world can be divided into past, present, and future. However, upon attainment of Buddhahood, when one has cultivated Mahottara to the highest level, one will have reached the unchangeability of permanence. Grandmaster encourages everyone to attain permanence; permanent bliss, permanent purity, and permanent unification of oneself with buddha. One who practices Mahottara will attain these four words: permanence, bliss, true self, and purity. If one does not cultivate, one will always be stuck in suffering, emptiness, impermanence, and no-self. One will be stopped there forever. 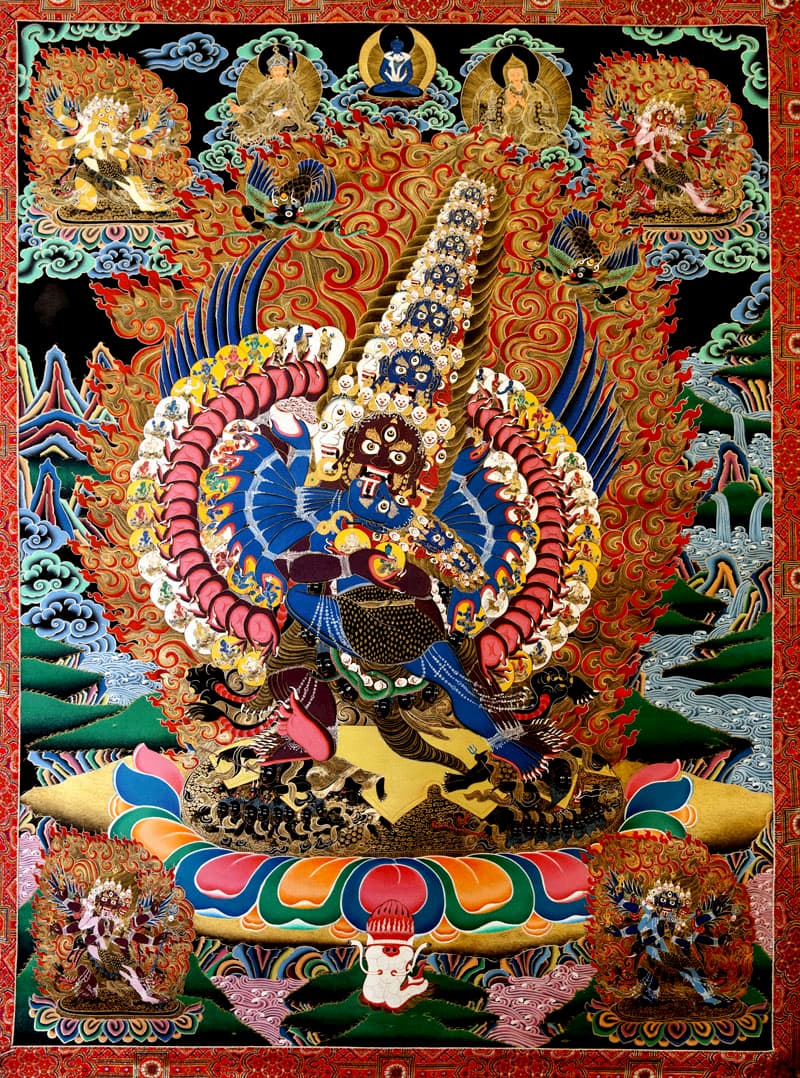