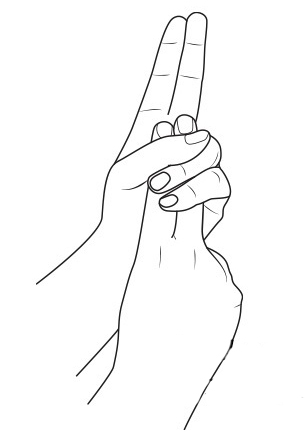 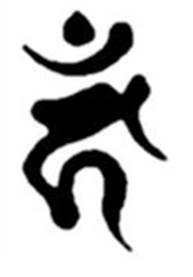 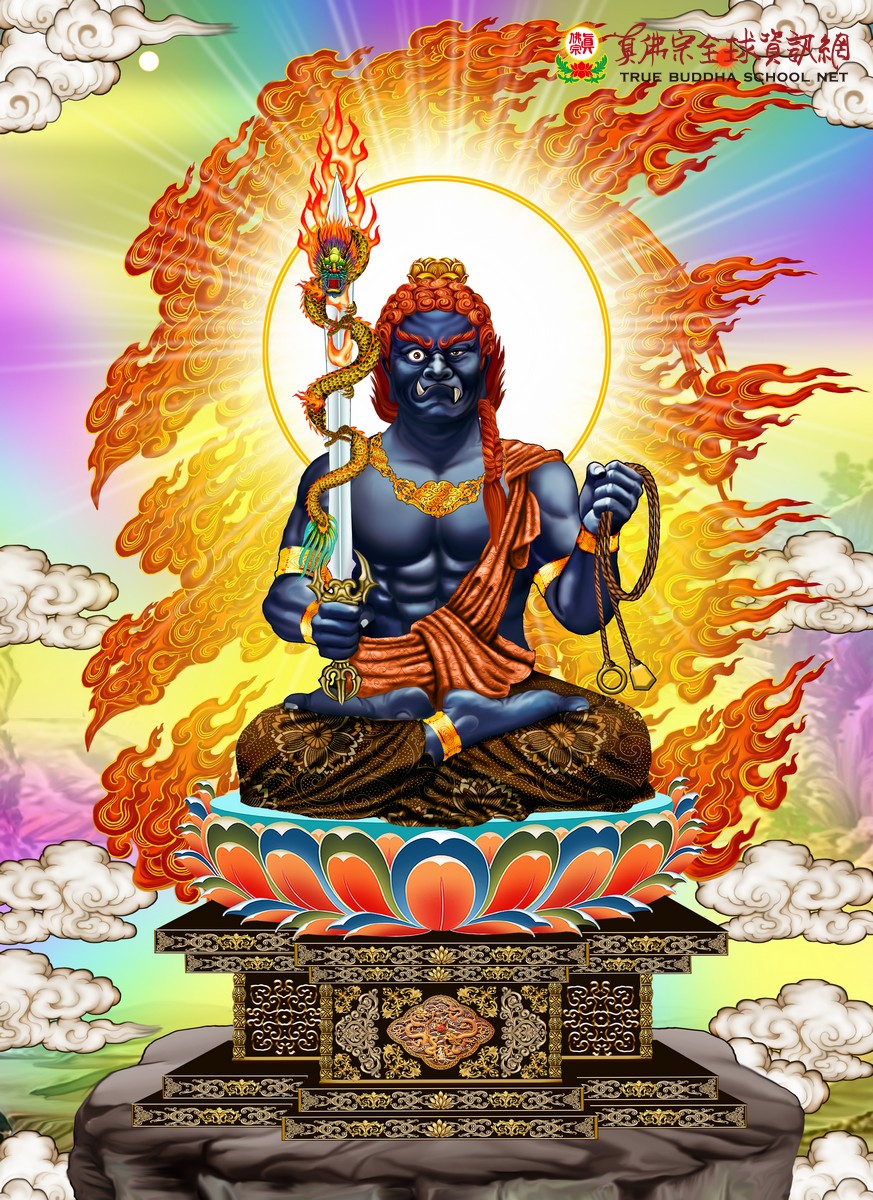 Acala looks wrathful, with one eye squinted and the other expressing great anger. His mouth is tightly closed with fangs exposed (a lower fang protrudes upward while an upper fang protrudes downward.) His right hand, held before his chest, holds a dragon sword spouting phoenix flames. His left hand holds a vajra lasso. He is surrounded by fiery flames and may be seated or standing on a huge rock.

【Living Buddha Lian-sheng Sheng-yen Lu Dharma Discourse - Acala Background and Key Cultivation Formula】
Of the Eight Wisdom Kings, Acala is the foremost. In both the Womb Realm and the Diamond Realm, he is the transformation and Wheel of Injunction of Vairocana (All-pervading Vajra.)

Of the 10 wrathful deities, Acala is the fiercest. Although rarely seen in Tibetan Vajrayana, Acala is popular in Japanese Esoteric Buddhism where he is the primary and most important Great Wisdom King.

Following is the vow of Acala: ''One who sees me will generate bodhicitta; one who hears my name will stop doing evil and begin doing good; one who listens to my teachings will obtain great wisdom; one who knows my mind will attain Buddhahood in the present body.''

Acala is attended by eight great youths. His two main attendants are Kongara and Seitaka, known as the immovable youths. The dedication verse of the Acala Practice therefore states:
''With infinite, invincible power
The eight great youths, the retinue of Acala
Subdue the four maras, greed, anger, and ignorance
Support Buddhadharma and save sentient beings from the three evil realms''

Acala is a wrathful body manifested by the buddhas and bodhisattvas for the purpose of subjugating all demons and saving sentient beings who are stubborn and unyielding. Although Acala is extremely wrathful and terrifying in appearance, this sacred appearance actually manifests out of the compassionate hearts of the buddhas and bodhisattvas. Acala's wrathful and terrifying appearance also symbolizes brilliant wisdom that overcomes all demonic forces and karmic hindrances.

The true significance of Acala is not subjugation of one's enemies but self-subjugation of one's own afflictions. The truth is, one's real enemy is oneself. If one focuses on the faults of others but doesn't subjugate oneself, one is caught up in attachment. The critical issue in cultivation is therefore subjugation of oneself. When one has subjugated oneself, when one has brought one's outflows completely to an end, one is qualified as a Vajrayana yogi. This is the most important point and the key cultivation formula.

Acala is the vajra body of Mahavairocana Tathagata. He is powerful, magnificent, and extremely formidable. Acala is usually depicted with the left eye squinting and the right eye wide open, with the lower lip biting the upper lip. This depiction expresses his intense wrathfulness. The Acala Sword he carries is a dragon which emits phoenix flames. The radiance of the phoenix flames is magnificent and formidable. He holds a sword in one hand and a vajra lasso in the other. There are two seals suspended from the vajra lasso; the seal of the Womb Realm and the seal of the Diamond Realm. Acala's holding the dharma seals represents his authority over both realms.

When undertaking activities which require formidability, one must chant the mantra formidably; ordinarily, one invokes and prays to Acala by reciting his mantra softly and gently.

Acala is a karma vajra protector. If one has undertakings which require his assistance, one recites his mantra formidably. One then prays to Acala to swiftly execute one's request.

Acala Practice eradicates karmic hindrances, subjugates demons, eliminates obstacles and calamities, increases good fortune and wisdom, brings one the assistance of valuable people, generates peace and harmony in one's family, and fosters love and respect towards oneself. If one practices diligently, one may attain Buddhahood in one's very body. Therefore, this is a magnificent and truly significant practice.

If a child cries during the night, the family can practice Living Buddha Lian-sheng's teaching by drawing the Cutting-character Formula over the child's body while chanting '' Lin, bing, dou, zhe, jie, zhen, lie, zai, qian.'' If the child is not sleeping soundly due to disturbance by spirits, the spirits will leave immediately. Once one strokes the formula, the child will stop crying. This method can be used to stop a child's crying at night.

If someone wants their calamities eradicated, their karmic hindrances removed, or their illness cured, one can face the person and draw the Four Verticals Five Horizontals Mudra. If one needs to draw the mudra five times, this indicates that the person has heavy karmic hindrances. If one needs to draw the mudra just one time, this indicates the person has light karmic hindrances. One's drawing of the mudra is like the flames of a homa fire eradicating all the person's karmic hindrances. If one faces the spirit of the deceased and draws the mudra, the deceased's spirit is then easily freed from bondage and gains rebirth in the Western Pure Land of Ultimate bliss. The Four Verticals and Five Horizontals Mudra can solve a minor problem such as a child crying at night, or it can be used for something much more significant such as delivering a deceased person's soul to the pure land. It's that powerful.

One may use ''lin, bing, dou, zhe, jie, zhen, lie, zai, qian'' the Nine-character Mantra with the Cutting-character Formula to cure physical illness of oneself and others. If one possesses dharma power, the illness will be eradicated. This method won't work if one lacks dharma power, and using it would be like a child making random brush strokes on paper.

Generally speaking, when one chants ''qian'' in the mantra ''lin, bing, dou, zhe, jie, zhen, lie, zai, qian,'' one pushes both palms outward. Although evil spirits, ghosts and demons are all fierce, they will be driven away upon encountering the Nine-character Mantra. This is because the mudra is equivalent to the actual presence of Mahavairocana Buddha. Furthermore, Acala, his transformation, is far fiercer. This method can therefore be used for anyone who is possessed, has an attached spirit, or has a mental illness caused by ghosts. The Nine-character Mantra with Cutting-character Formula has the greatest power and is used most frequently by Grandmaster in his practices.