Surgery in a Dream

One of my disciples had pancreatic cancer which had already spread throughout his body.
The doctor said, "He can be discharged!"
The patient's family asked, "Why?"
The doctor replied, "Chemotherapy cannot save him and his life expectancy is less than three months. Therefore, he can be discharged and return home!"
Upon hearing this, his family members almost died. They cried bitterly, feeling gloomy and miserable.

His family members were True Buddha School disciples. He had been diagnosed and treated in a number of hospitals, and the doctors all agreed that he was in the final stage of pancreatic cancer.
Complexion sallow and gray.
Entire body swollen.
Only one breath remaining.
Extreme pain.
His family members came to me and begged me to save him.

I said, "In the final stage of cancer, there is no cure!"
They knelt down before me.
I said, "Alright! Perhaps there will be a miracle!"
The family members asked, "What should we do?"
I said, "Chant the True Buddha Sutra."
"How many times?"
"Do your best, the more the better."
Everyday, after they returned home, the entire family, young and old, including the patient, burned incense and made offerings to the deities, then chanted the True Buddha Sutra.

One night, after completing 500 recitations, the patient had a dream. He saw five doctors dressed in white gradually descending from the void. The patient recognized one of the doctors as HH Living Buddha Lian-sheng Sheng-yen Lu.

In the dream, the patient watched the five celestial doctors cutting him open from chest to abdomen and the cleansing process. Then, he saw the doctors return the five viscera and six internal organs to their original positions, and forcefully push the intestines back in place. Once this major operation was completed, the five celestial doctors cupped their hands, bowed, and returned to the heavenly realm.

When the patient awoke, he felt comfortable throughout his entire body, his complexion was healthy, he was able to get out of bed and walk around. All his symptoms had disappeared. It seemed he was no longer sick.

After a check-up, the doctor was shocked that the patient showed a cancer index of zero. Good heavens! The cancer had disappeared! The doctors were truly amazed. In a gesture of thanks, the family published an account of this incident in the newspaper!

I say, "This was a miracle. He was saved by 500 repetitions of the True Buddha Sutra!" 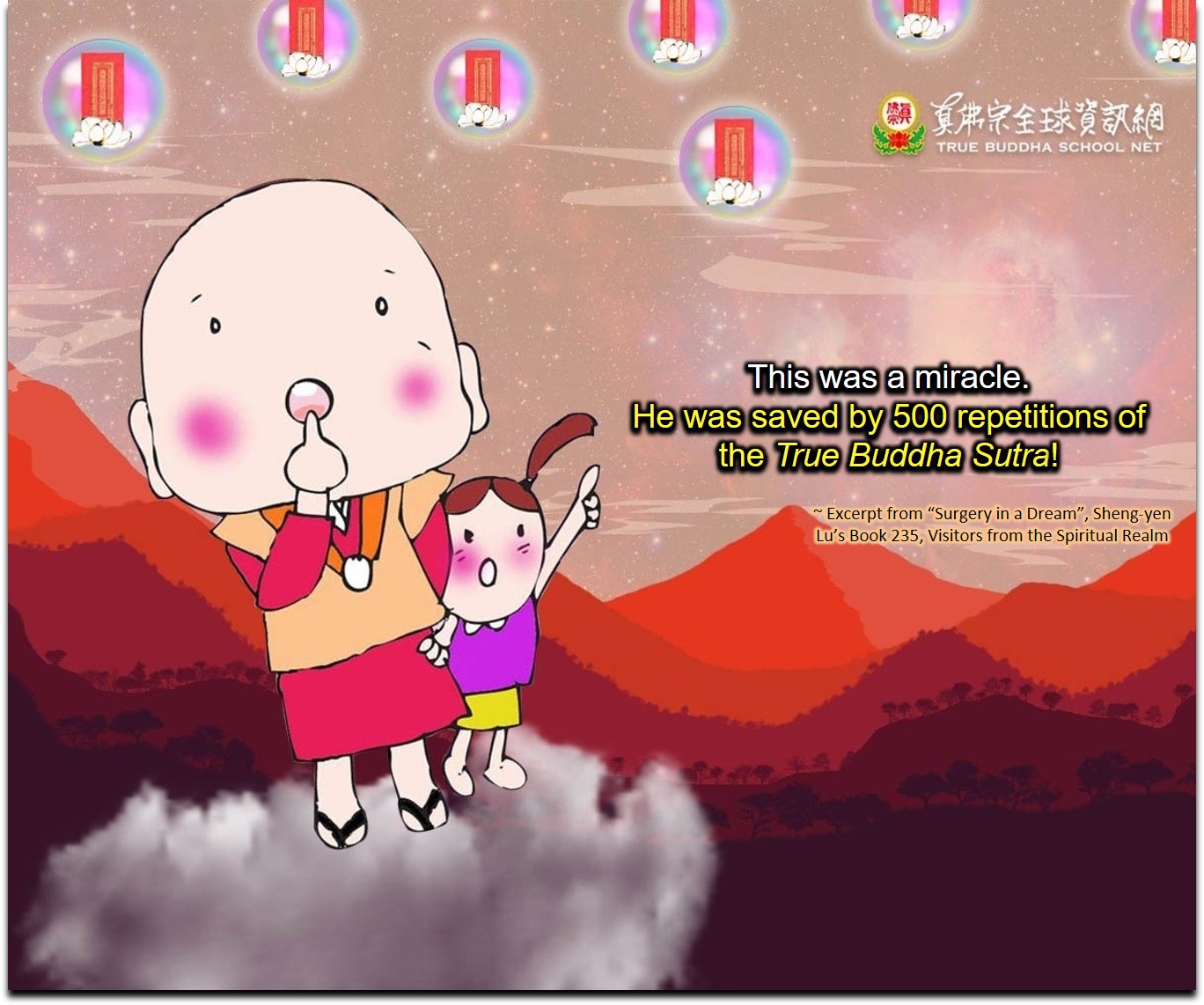