First, I wish to thank everyone, including all the VIP's, for being here today. A very warm welcome and good afternoon to all present. (Grandmaster greets everyone in various languages) 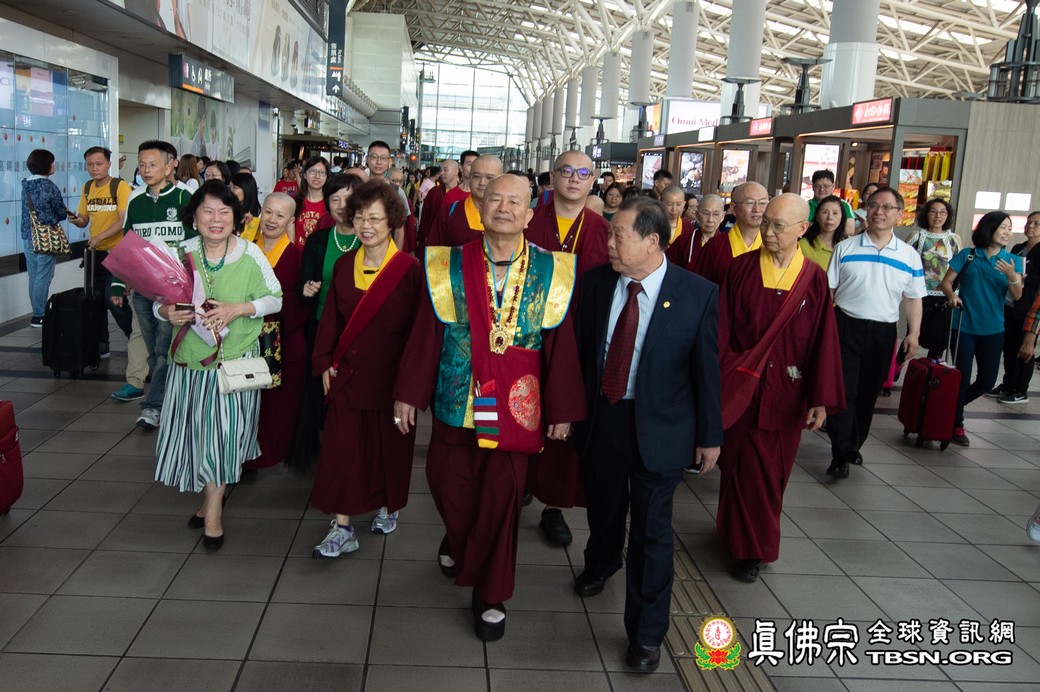 The ceremony today was very fruitful! We wish to express our gratitude to Green Tara Bodhisattva, the 21 Taras, the Natural Disaster Eradication Tara, Prajnaparamita, all the Buddha Mothers, Taras, and celestial goddesses under Prajnaparamita for making today's ceremony resonate with positive spiritual energy. 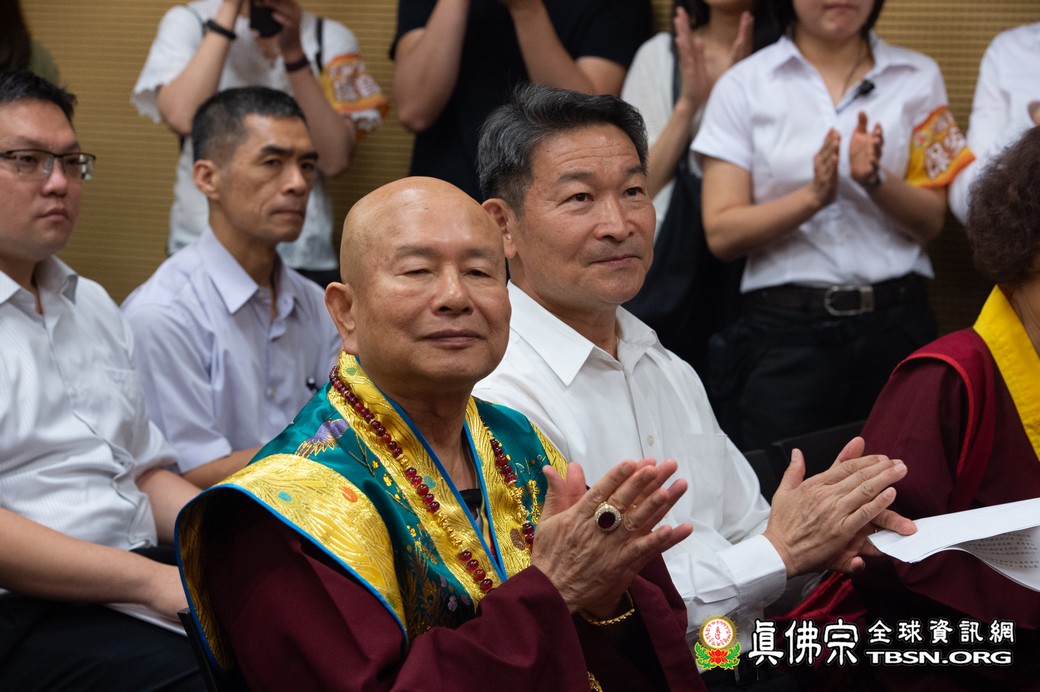 I will now reveal the secrets of earthquake eradication dharma. What constitutes a natural disaster? An earthquake is one kind of natural disaster. How do we eliminate earthquakes? I shall reveal a secret to everyone. As I mentioned before, I instructed Master Lianzhe to practice this dharma. Why was Taiwan still riddled with frequent earthquakes? I am telling you right now. This dharma must be performed precisely, without being more or less. What does this mean? Let me elaborate.

Placing the earth collected from east, south, west, north, and center at the Natural Disaster Eradication Tara shrine, one then cultivates 108 sessions of Natural Disaster Eradication Tara Dharma. During each practice, one must recite the mantra 108 times, form the mudra, and visualize Tara. One must cultivate 108 sessions of the practice. The practice may be performed as a group practice or one may practice alone.

When one completes the earthquake eradication practice and the collected earth has been blessed, one should return the earth to the location from which it was originally collected. Earth collected from Su'ao, Taixi, Eluanbi, Fuli or Yuli, and Nantou respectively must be returned to the original collection point. One must adhere strictly to these rules and be sure to return the exact amount of earth to its original location; if one kilogram was collected, exactly one kilogram must be returned. When the practice is completed, earthquakes will no longer occur within these regions.

Japan has the most earthquakes.We have two masters based in Japan: Master Jingxiang (靜香上師) and Master Lianchang 石川敏行（蓮常上師). Master Jingxiang, what is your Japanese name? It is Tian Yuan Jing Hui (天元靜惠）. One of these two masters is Japanese, while the other, though not Japanese, considers Japan her native country. Therefore, since Japan is plagued by earthquakes, I think you two masters have a duty to help Japan, so you must know esoteric practice. A tantric sadhana consists of mudra, mantra and visualization. To suppress earthquakes, a practitioner must cultivate a total of 108 practices.

I'm discoursing this particular practice because it is truly extraordinary. When one puts it into practice, it can eliminate earthquakes. So, from what locations in Japan should we collect the earth needed for the practice? 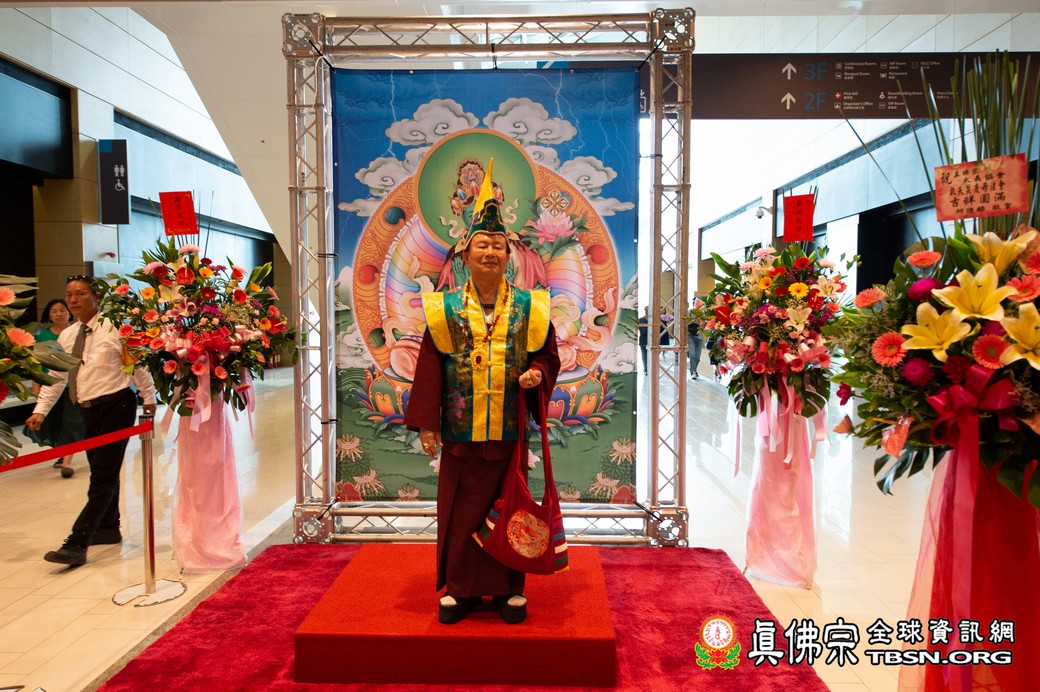 So what about flooding? Does Grandmaster know a practice to protect against flooding? There is a saying in Chinese: ''Stop soldiers from advancing with a general and stop flooding with an earthen dam.'' This practice also involves collecting earth. From where do we retrieve the earth? From a riverbank.

I remember when I was young, I rode my bike from Xinxing District in Kaohsiung to Pingtung County. I rode past a river called the Shimo Tansui-kei. By what name is the river known now? (Note: Gaoping River) One should collect earth from the banks of Gaoping River. This will help prevent flooding in Kaohsiung and Pingtung.

As for central Taiwan, one is required to collect earth from Zhuoshui River. In Taipei, earth should be collected from Tamsui River. Earth must be collected from a major river. After the earth is collected, one performs the practice. Afterwards, one returns the earth to the riverbank from which it was collected. As a result, flooding will not occur.

However, we cannot rely solely on the Natural Disaster Eradication Tara practice to prevent flooding. The local Department of Water Resources should also establish appropriate infrastructure to facilitate the channelling of water into drains, to streams and rivers, and finally to the sea. Flooding can only be fully eradicated by constructing appropriate infrastructure.

I have already discussed earthquake and flood disasters. I will now discuss disasters caused by fire. The cause of fire may be an electrical malfunction or unknown. But what if a fire is caused by arson? If a fire is caused by arson, it will be difficult to prevent. So, as disciples of Natural Disaster Eradication Tara, how do we relieve fire disasters? I just formed a mudra (Grandmaster draws four verticals and five horizontals while reciting ''Lin, bing, dou, zhe, jie, zhen, lie, zai, qian'' (臨、兵、鬥、者、皆、陣、列、在、前)). This is the Nine-character Mantra Practice.

Should someone in the audience happen to encounter a house on fire, facing the fire, this individual can extinguish the fire by just drawing the four verticals and five horizontals while reciting the Nine-character Mantra, ''Lin, bing, dou, zhe, jie, zhen, lie, zai, qian'', then forming the Four Verticals Five Horizontals Mudra (Grandmaster demonstrates the mudra) and pushing the mudra toward the fire. The fire will be extinguished. This is the method to relieve the fire disasters.

At times, a fire may be difficult to prevent. We hope that, as a result of this ceremony, there will be fewer fire disasters. If a fire breaks out and one of you happens to be on-site at the time, that individual can immediately perform this fire-eliminating practice. As a result, fire trucks will arrive in time to extinguish the fire. In addition, by applying this practice the fire will diminish and stop spreading.

There was a True Buddha School (TBS) disciple whose house was in the middle of a row of houses. The fire spread toward his house from the side of the row, but the flames jumped over his house. His was the only house that wasn't engulfed in the flames. 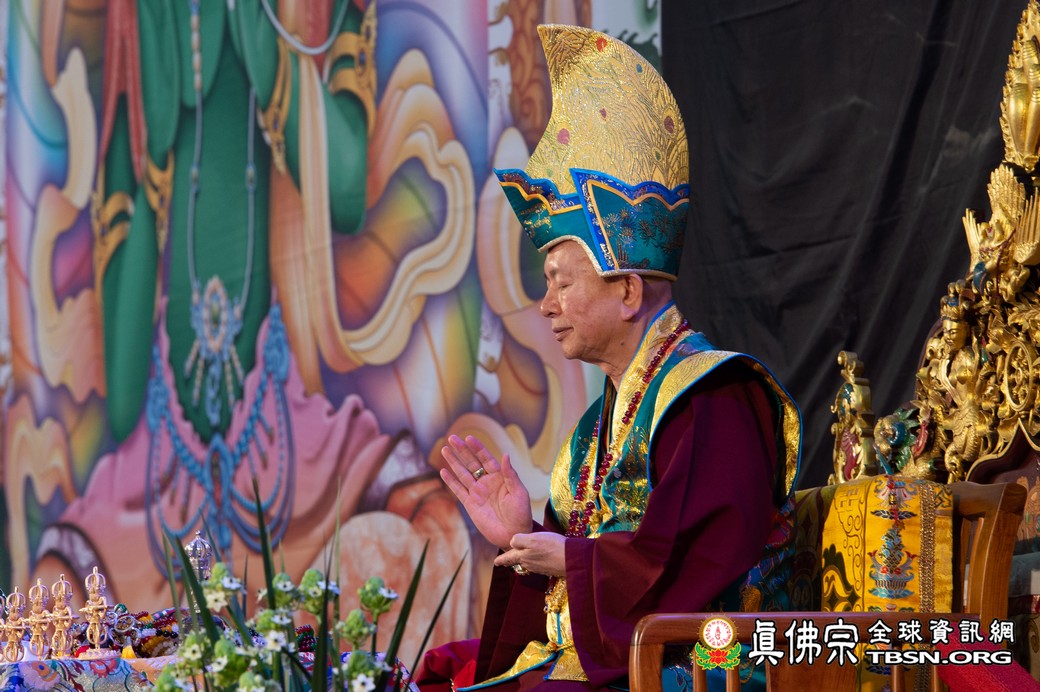 A TBS disciple working in the Immigration Bureau checked the dates when Grandmaster entered and departed Taiwan against the time period of Grandmaster's retreat and verified that during this three and a half year period, there were no typhoons in Taiwan. Why was that so? It was because Grandmaster was in Taiwan. Typhoons landed in Taiwan immediately after I left. This is a fact. Typhoon Xangsane hit Taiwan before I came to Taiwan to begin my retreat. Taiwan was hit by another typhoon not long after I left. This is the truth.

We do feel sympathy for the Japanese that powerful typhoons were redirected to their country. Korea is another country affected by the redirection of typhoons. It would have been better if the typhoons had passed between Japan and Korea, right?

To Cure Illnesses
Use the Golden Well Dharma
The Natural Disaster Eradication Tara Practice is a practice which can eliminate all natural disasters of earth, water, fire and wind. In addition, the Nine-character Mantra and the Four Verticals Five Horizontals Mudra I just transmitted can not only relieve fire disasters, but can also save people. Form the Four Verticals Five Horizontals Mudra by cutting five horizontal lines with four vertical lines. Together, these nine lines represent nine syllables: ''Lin, bing, dou, zhe, jie, zhen, lie, zai, qian.''

True Buddha School has many practices that save people, such as ''First horizontal stroke becomes a creek, second horizontal stroke becomes a river, third and fourth vertical strokes form the Chinese ideogram of a Golden Well. This is no ordinary finger-pointing mudra, but a finger-pointing mudra of a scholar of Mount Lu. Pointing to the sky, the sky becomes pure; Pointing to the earth, the earth becomes spiritual, pointing to a human, the human gains longevity, pointing to a ghost, the ghost vanishes.'' This practice is very useful for treating illnesses, including illnesses caused by spirits and ghosts.

We really should not always rely on the help of Taishang Laojun: ''Spirits of the heavens and spirits of the earth, may Taishang Laojun descend.'' Instead of relying solely on chanting this mantra, we should also learn to use the Golden Well Practice. With the Golden Well Practice and Mudra, one just draws the Golden Well with one, two, three, four strokes and points to the ill or painful area while chanting ''First horizontal stroke becomes a creek, second horizontal stroke becomes a river, third and fourth vertical strokes form the Chinese ideogram of a Golden Well. This is no ordinary finger-pointing mudra, but a finger-pointing mudra of a scholar of Mount Lu. Pointing to the sky, the sky becomes pure; Pointing to the earth, the earth becomes spiritual, pointing to a human, the human gains longevity, pointing to a ghost, the ghost vanishes.'' Illnesses can be cured in this way, just by pointing to the problem area. 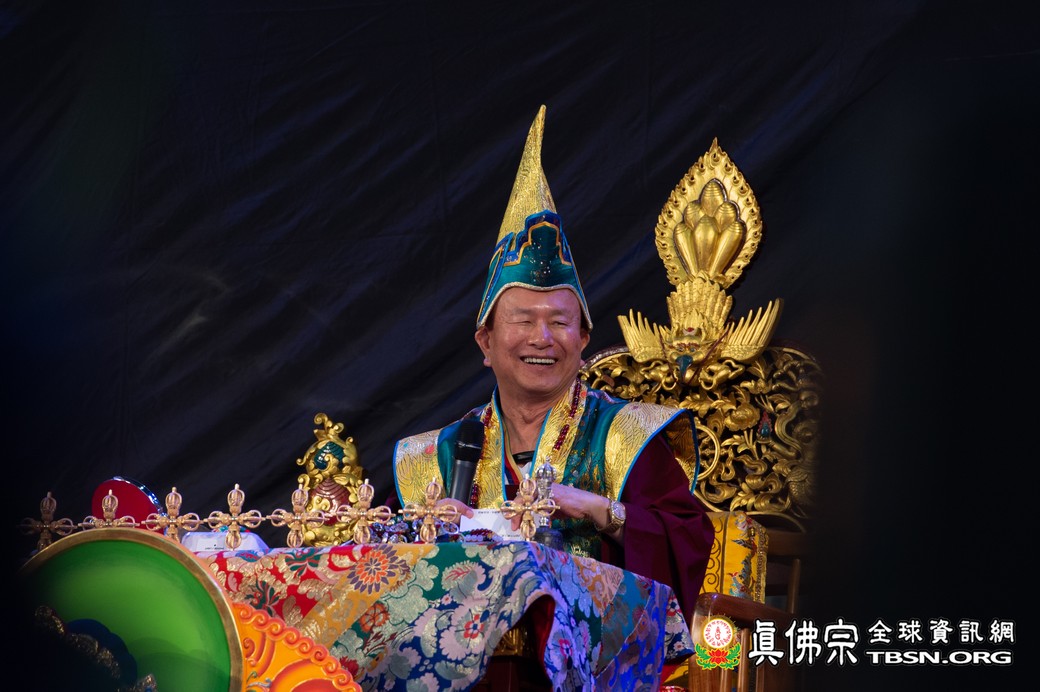 Keeping this in mind, as a spiritual cultivator, one must refrain from alcohol. Practitioners must not drink. Also, do not drink and drive. This ''not drinking and driving'' is itself a precept.

For a Tantric practitioner, abiding by tantric precepts is a requirement for attainment in spiritual cultivation.

Everything happens for a reason. In Buddhism, we believe in cause and effect. Therefore, one must not create evil karma. Trying to cultivate Buddhadharma while engaging in evil deeds is futile.

Cultivating Buddhadharma while violating tantric precepts is likewise futile. This is an extremely crucial point.

What I wish to tell everyone is that we must apply good judgment regarding everything we see. In this modern world, there is a lot of fake news and excessive smearing and slandering is taking place. Therefore, my advice to those seeking office and to voters at large is to exercise good judgment. This advice is for candidates and voters alike. Everyone should see the truth clearly. One should not smear or slander a good candidate who is actually working for the public interest. We must be clear about this.

I want to caution everyone to carefully protect oneself from scammers and fraudulent organizations. Why is Taiwan so well-known for con artists? Because frauds and charlatans from Taiwan have infiltrated every part of the world including the US, China, Spain, and Southeast Asia. Needless to say, they operate in Taiwan as well.

One day I received a call and the caller told me over the phone, ''I have kidnapped your grandson.'' As he spoke, I could hear a child crying in the background. I asked the caller, ''What language does my grandson speak?'' to which the caller replied, ''He speaks Taiwanese of course.'' I answered, ''My own son doesn't speak Taiwanese, much less my grandson!'' My grandson lives in the US, so, of course, he doesn't speak Taiwanese. This caller was obviously lying.

Scammers are all over the place including Taiwan and the US. Once, while in the US, I received a call allegedly from the Internal Revenue Service (IRS). According to the caller, I had unresolved issues with the IRS, and was required to follow his instructions to press a certain extension number. Fortunately, my daughter is a lawyer so I have some knowledge of law and legal matters. My daughter had previously informed me that direct calling is not a practice of the IRS. Normally, the IRS communicates with the public in writing. I immediately hung up the phone as I knew this call was a scam. From this, we can see that con artists are active in the US also.

How did Taiwan become a country of frauds and charlatans? What it boils down to is education. There has been insufficient education. Education should focus on guiding people to have a good and virtuous heart.

Finally, I wish to express my gratitude to everyone for coming today. I pray that the Natural Disaster Eradication Tara, Green Tara, and the 21 Taras, will grant their blessings to this great land so that everyone will enjoy a long, healthy, peaceful and happy life free of natural and human disasters.