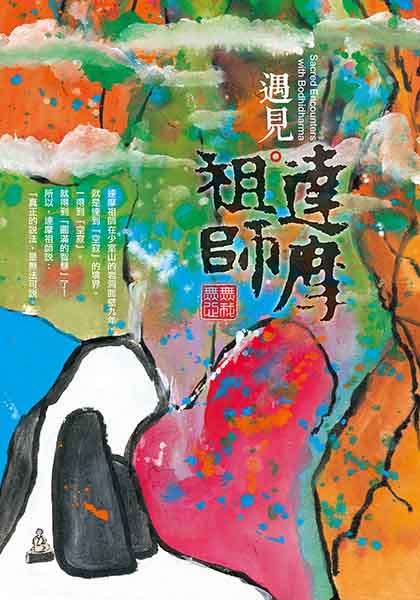 
Preface
Early 2020, in the studio on the 2nd floor of the True Buddha Foundation Offices in Seattle, USA, I (Sheng-yen Lu) painted ten portraits of Bodhidharma. At first I only wanted to paint one but when Master Lianzu heard about the portrait, he asked for it. After that, Master Lianseng requested one; and then Master Lianman the 3rd one; Master Lianchuan the 4th; …; Reverend Lianyun, the 9th; and Reverend Lily, the 10th portrait!.

Although people continued to request Bodhidharma’s portrait, I eventually had to say, “Stop!” I explained that “I am very happy to paint Bodhidharma’s portrait! But it becomes tiresome when I must paint it day after day. I would like to paint something else for change. Otherwise, Bodhidharma is the only topic on my mind!” It is because of my objection that people finally stopped making the request.

However, Bodhidharma had already been deeply imprinted in my mind and I was unable to erase it. His thick eyebrows, large eyes, full forehead, beard, … and it was his perceptive eyes that seemed to see through all worldly phenomena especially intrigued me.

I finally met Bodhidharma in the realm of Heavens and the Great Beyond. At first glance I recognized him! Bodhidharma, the Patriarch of Zen, the 28th Patriarch of the West, and Patriarch of the East. He flew before me (like a swallow swooping into the forest)! I trailed behind him (like a star chasing the moon).
He said, “Follow me!”
I replied, “Of course!”

Bodhidharma appeared very calm and collected; he was not poised to cross a river on a reed, sit on a lotus seat riding on a cloud, or fly like a garuda. He just looked natural.

He led me into a cave which seemed familiar to me. Bodhidharma said, “This was Venerable Sariputra’s cave in Vulture Peak.”
I replied, “Yes.”
“Originally, I wanted to take you to the cave in Shaoshi Mountain where I faced the wall and meditated for nine years. Later however, I felt it would be more meaningful to take you to Sariputra’s cave.”
“How are they different?”
“Actually, they are not different, I just wanted you to return to yourself. Make you aware that everything is a dream. They are dream bubbles so you won’t become attached and deluded.”
“Thank you, Bodhidharma!”
(This book is all about the conversation between Bodhidharma and I and the Buddhist allegory within. May this book enrich your mind.)