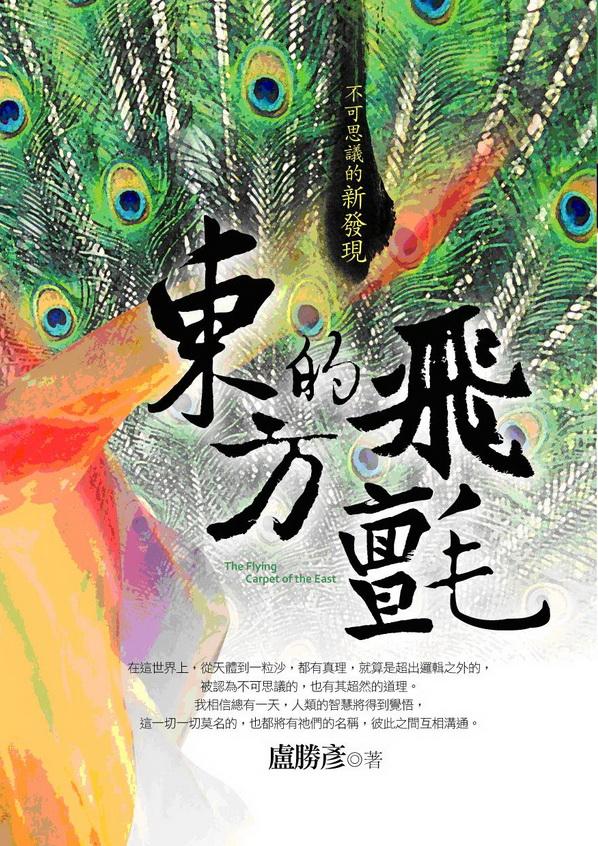 Book 31 : Flying Carpet of the East

Flying Carpet of the East : The Miraculous Experience

One night, in 1969, I had an unusual dream about climbing a tall mountain. At the summit stood an ancient temple. I walked in without hesitation, as if I were returning home.

In the temple stood statues of many gods. Some appeared gentle and compassionate; others looked wrathful. Still others were solemn and dignified. I tiptoed to the center of the temple hall and there in front of me stood a very old Taoist Abbot. He pressed his palms together in front of his chest and said, `I`ve been waiting a long time for you.`

`Sir, I don`t know you,` I replied. `How could I have an appointment with you?`

`How can we not know each other?` he asked. `We have experienced three religions together, and traveled four seas. We have met once every five hundred years. Even if you should sink to the lowest hell and become a vicious demon, I would still recognize you.`

`You will not understand unless you get hit,` said the Taoist. He raised his duster and hit me on the head. Startled, I woke from my dream.

I seldom dream. That was the first dream I`d ever had that was still vividly clear to me when I woke. That morning was Sunday, and my mother wanted me to accompany her to the temple. So although I was Christian, I decided to go with my mother to the Buddhist Temple near my home. I went not to burn incense, nor to bow to any gods, but as one would go to a tourist spot. I looked down on people who bowed to gods, especially well-dressed men. It amused me to see them kneel before statues with such serious expressions on their faces.

The temple was not big. It was called Yu-huang-Kung (Jade Emperor`s Palace). The monk in charge was Shih Hui-ling. I didn`t recognize most of the god statues. A festival was in progress that day. The temple was packed with people elbow to elbow. It was smoky with burning incense, so I went outside to stand under the temple eaves. I looked back inside and noticed among the crowd a lady wearing a royal blue dress. She appeared to be in her fifties. She knelt in front of the statues and seemed to be having a conversation with them. Many people surrounded her. She was answering their questions. Suddenly the woman stood and shouted, `Who is Lu Sheng-Yen? Who among you is Lu Sheng-Yen?` I heard her calling me, even though I was standing outside.

My mother also heard. She moved forward and asked, `Please tell me, why are you looking for Lu Sheng-Yen?` ,

`It is not I looking for him,` the blue-dressed lady replied. `Hurry and bring him here. The gods have something to tell him.`

I came in and stood before her.

`Are you Lu Sheng-Yen?` the lady asked.

Without answering, she knelt again and began mumbling. Then she turned toward me. `You are a Christian, aren`t you?`

`You have a college education?`

`Do you understand the dream you had this morning?`

I was astonished! How could she know about my dream? I hadn`t told anyone about it, not even my mother! It was just by chance that I came to this temple. How mysterious this all was! She continued to question me.

`It is true that right now you know nothing, but if you kneel beside me many things will be revealed to you. Come. Kneel down and close the palms of your hands together,` the blue-dressed lady said.

I imitated her gestures and knelt. A crowd surrounded us, including my mother and the monk in charge of the temple.

As soon as I closed my eyes a miraculous thing happened. I saw a ray of light appear in front of me and in the light three Bodhisattvas appeared, each sitting on a lotus flower. Seven glistening colors emanated from their bodies. I reminded myself that this wasn`t a dream. It absolutely was not a dream! I was seeing it with my own eyes in broad daylight!

The Bodhisattva in the middle said: `Study the teachings of Buddha wholeheartedly. `

Another said: `Wholeheartedly turn to virture.` Then they vanished, and there appeared a huge shiny red cloth stretching down from heaven.

On the cloth were written two golden words: Loyalty and Justice.

I heard a voice say: `Today the Jade Emperor gives you the two words: Loyalty and Justice. They are to be the two basic principles you live by in this lifetime. To find out what you should or should not do, ask your heart first. As long as you can openly face heaven and earth, you will be open to the Tao which is eternally present everywhere.`

`Yes, I saw and heard, but how is this possible?` I asked.

`There are many, many things that are unbelievable. Today you experienced some. In time you will understand more. You will see and hear and feel what most people are not able to experience. Slowly the gods will teach you.`

It was difficult for me to believe what had just occurred, yet it was so real I couldn`t help believing.